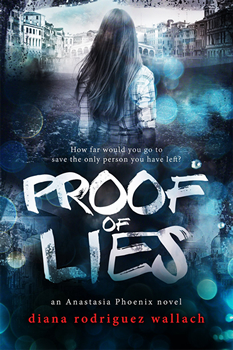 Anastasia Phoenix, a mix of Nancy Drew meets Buffy Summers, is a witty, “butt-kicking teen” hunting for her missing sister in Diana Rodriguez Wallach’s new release PROOF OF LIES. This globe-trotting young adult spy thriller, is a suspense-filled page-turner from start to finish—inspired by a Boston University professor.

“I was attending a college fair in Philadelphia and listening to students talk about Boston University,” Wallach says. “One kid spoke about a very unusual professor, one who was a former communist spy for Czechoslovakia during the Cold War and who now taught budding journalists how to tell if they were being fed false information. I never had the pleasure of taking his course; however, years later when I decided to attempt a YA thriller packed with super spies, that story came back to me. I wanted my world of espionage to be focused on a unique specialty that offered me both creative freedom and a focus that could hold the interest of teen readers; disinformation fit the bill.”

Wallach says she eventually got to meet the spy who inspired her and they “had a fascinating conversation in his home that led to many of the espionage elements in PROOF OF LIES, as well as the name of the CIA agent that appears at the end of the novel, Martin Bittman.”

The inspirations behind Anastasia herself are closer to home. Wallach has combined her best-loved heroines from TV and literature to shape a determined, intelligent lead character that will excite teen readers. Coupled with Marcus, Anastasia’s emotional anchor throughout the novel, the pair cross countries in a tumultuous adventure, and it’s these scenic locations that really bring PROOF IN LIES to life.

“I love to travel. I studied abroad in Spain when I was in college and that gave me the bug. All of the scenes in PROOF OF LIES —from Boston, to Tuscany, to Rome, to Venice—are based on places I’ve visited. This is also true for my first YA series, Amor and Summer Secrets, which is set in Puerto Rico; and my short story collection, Mirror, Mirror, which has scenes in Santorini, Greece,” she says.

In fact, every hotel described in PROOF OF LIES is based on the exact room Wallach stayed in with her husband.

“The dangerous cliff Anastasia encounters outside of Cortona’s city walls was trampled by my two feet,” she says. “When Anastasia stops at a café in Rome for cappuccino, you can bet I ate there. And when she takes a water taxi in Venice, I can describe the spray on her face because it felt the same way on my own cheeks.”

PROOF OF LIES, Wallach says, leads to Book Two: Lies that Bind, which tours Brazil and England. Wallach is also planning further trips in Book Three to Germany, Poland, and the Czech Republic. But at the heart of the series and the place Anastasia will always return, is Boston, Anastatia’s home and the birthplace of Wallach’s initial inspiration for the series.

Vivid settings form the backdrop of PROOF OF LIES, but Wallach is also very conscious of creating the right level of tension to keep readers hooked.

“A thriller is all about building suspense,” she says. “This applies to the major crime that’s central to your novel, as well as the carefully dripped backstory and romantic intrigue. Every moment, whether it’s emotional or action-packed, needs to make the reader turn the page, and I try my best to accomplish this in every scene.

“I grew up loving the YA thriller genre, so honestly, this is a return to the books that inspired me. As a child of the ‘90s, I was obsessed with Christopher Pike. I vividly remember waiting for the release of each of his books—from Chain Letter, to Remember Me, to Fall Into Darkness. He’s one of the reasons I write for YA now, and I would completely geek out if I ever met him in person. I think that’s why I wanted to attempt a YA thriller of my own.”

Wallach’s thriller comes after a successful YA romance series, a transition that has had a tremendous learning curve.

“It is a lot harder to write a thriller than a contemporary romance. There is so much plot to keep straight, so many different characters, and so many motivations for why they do what they do,” she says. “I now write in Scrivener, and I keep outlines for each of my characters detailing how the plot is unfolding in their timeline and what’s motivating them individually.”

This learning curve was not without setbacks when it came to publishing. It took Wallach seven years before PROOF OF LIES was snapped up by an editor, and this was after lengthy rewrites, cuts and streamlining. Despite what initially seemed like endless changes, Wallach never gave up on her ambition for PROOF OF LIES and thriller writing.

“Rejection sucks, but if I let it break my faith in this book, it wouldn’t be sitting on a shelf at Barnes & Noble right now,” she says. “So, to the writers still hoping to make it—no one can teach you how to believe in yourself. That has to come from within. If you know you’ve got something, it’s up to you to stick with it and do the work.”

Wallach is currently working on the next two Anastasia Phoenix series instalments, hoping to publish Lies that Bind in March 2018 and the yet untitled Book Three in 2019. 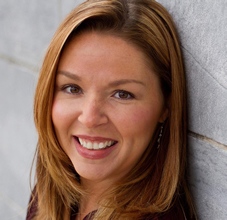 Diana Rodriguez Wallach is the author of the Anastasia Phoenix series, three young adult spy thrillers. The first book in the series, PROOF OF LIES, debuts in March 2017 (Entangled Publishing). She is also the author of three award-winning young adult novels: Amor and Summer Secrets, Amigas and School Scandals, and Adios to All The Drama (Kensington Books); as well as a YA short-story collection based on the Narcissus myth, entitled Mirror, Mirror (Buzz Books, 2013).

In 2011, she published a highly regarded essay in Dear Bully: 70 Authors Tell Their Stories (HarperCollins). It was the only essay chosen from the anthology by Scholastic to be used in its classroom materials. Diana is featured in the anthology, Latina Authors and Their Muses (Twilight Times Books, 2015), and she is currently on staff as a featured blogger for Quirk Books.

In 2010 Diana was named one of the Top Ten New Latino Authors to Watch by LatinoStories.com, and she placed second in the International Latino Book Awards. She is an advisory board member for the Philly Spells Writing Center, and is a Creative Writing instructor for Johns Hopkins University’s Center for Talented Youth. She holds a B.S. in Journalism from Boston University, and currently lives in Philadelphia.