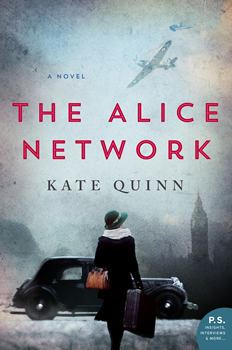 When I first began plotting out THE ALICE NETWORK, I knew my heroine would be a spy. She was going to work for French aristocrat Louise de Bettignies, who under the code name of Alice ran a network of agents in German-occupied France during the First World War. My heroine would be recruited by her, would have harrowing adventures, and would be named Eve—that much I knew right away. Figuring out the rest was a little trickier, because the words “female spy” come pre-loaded with expectations.

Hollywood, James Bond, and the film noir tradition have given us plenty of preconceptions about female spies. Sleek assassins with stiletto knives in their stiletto boots, sexy hackers with thumb drives full of nuclear codes in their bras, sultry femme fatales seducing state secrets out of oblivious men over champagne and pillow talk—say “female spy” and the resulting image is flamboyant, glamorous, and above all sexy. But the realities of spying weren’t so picturesque—and a woman who succeeded as a spy in real life would be very different from your average James Bond espionage queen hiking her couture evening gown out of the way so she can snap a man’s neck with her thighs.

The Alice network’s agents relied more on stealth and observation than glamour or secret-agent skills. Louise de Bettignies’ sources were ordinary men and women who observed the German invaders, eavesdropped on them, rifled their paperwork, and secretly passed any information gained back to British intelligence. Getting German attention was dangerous; it was far better for your spying and your health if they didn’t notice you at all—to this end, women and teenagers were often recruited, since they were less likely to be suspected. And a successful spy probably wasn’t swanning around a fancy party in a glittering gown, the center of all eyes—she was far better off serving the canapes, storing away every tidbit of information in earshot while going completely unobserved.

Quinn in a ’38 Packard convertible

Spying during World War I was also relatively low-tech. No computers or firewalls, no codes requiring complicated mechanical decoding machines as would happen in World War II. Passing information involved written ciphers, hand-drawn maps, or messages written in tiny letters on rice-paper slips, and smuggling information relied more on creativity than on Inspector Gadget devices—papers tucked into shoe-heels or wrapped around hairpins, petticoats inscribed with map coordinates in invisible ink.

Above all, spying in an occupied zone was a game of endurance and patience. The agents in the Alice network didn’t have to gear themselves up for one explosive mission, after which they went home or maybe got some R&R in Bora Bora like Vin Diesel in “XXX.” These spies looked for information every day as they went about their lives, passed it on, and then went right back to work and did it again the next day. And the next, and the next, and the next, having no idea how long the war would go on, or how long they could keep spying without being caught—because the Germans were very good at catching spies. And if you were caught, you could be sentenced to life in a German prison, or shot by firing squad. 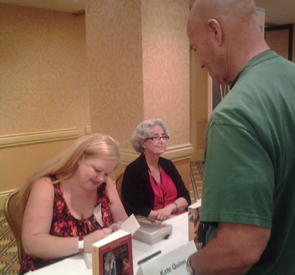 So what kind of woman would my heroine Eve be, given all this information?

She needs a job that gives her access to German intelligence, so I made her a waitress in an upscale French restaurant catering to German officers who talk shop over their brandy. Since her work relies on eavesdropping, I made her fluent in English, French, and German, brought up in a French village on the German border by an English father. Rather than make her a beauty—fantastic good looks would get her noticed—I made her look young for her age, the kind of 22-year-old who gets carded every time in a bar, something she plays up adroitly because everyone underestimates a teenage waitress. I gave her a speech impediment, a disadvantage she turns into an asset because ignorant people assume a girl with a stammer must be stupid. And because you need to pretend total incomprehension when you’re pouring brandy and listening to military secrets in a language no one knows you speak, I gave her a great poker face.

Eve does cross over a little bit into the more glamorized view of spying—there are a few secrets wheedled out of an unsuspecting man over glasses of champagne, because what’s fiction for if not to dress up real life just a bit? But overall, the female spy at the heart of THE ALICE NETWORK turned out quite different from the Hollywood stereotypes. Rather than a sequin-clad femme fatale with a gun in her garter, Eve is just an ordinary-seeming girl who hides razor-sharp observation and keen intelligence under big doe eyes and an awkward stutter; a girl who can lie like a rug in three languages and never lets her mask slip with an unguarded emotion; a girl who flutters around with dirty plates and an apron, but has state secrets written down on rice-paper slips and rolled around her hairpins.

I think she turned out more fun that way.