A Thriller With a Spiritual Message 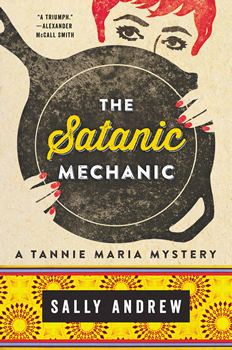 Sally Andrew’s debut novel, Recipes for Love and Murder, became an instant success around the world.  Alexander McCall Smith said it was “a vivid, amusing and immensely enjoyable read” and called it “a triumph.” Tannie Maria is a memorable character, tenacious but sympathetic, and fixated on cooking and food. In the sequel, THE SATANIC MECHANIC, we start getting hints of what this fixation is about and start to see more deeply into her character as her relationship with Detective Henk Kannemeyer flounders. This is a deeper book than Recipes, but it has the same fun and flair. And great recipes, of course!

Tannie Maria is a wonderful character. Steeped in the traditions of the Karoo, “cooking with love,” and caring, but she’s also as hard as steel when she has to be.  Did you set out to understand Tannie Maria more deeply in the new book, or did she just decide to tell you?

My decisions and Tannie Maria’s decisions are usually entwined. One of us may start with an idea and the other will run with it. There were questions raised in the first book about Tannie Maria’s relationship with her late abusive husband, and how this impacted on her psychology. Many women suffer from PTSD after chronic abuse, but I was not explicit about exploring this in Recipes. In THE SATANIC MECHANIC, I go deeper into Maria’s PTSD symptoms. I also show that there is a problematic aspect to her food-obsession (which in book one could have been interpreted merely as a passion for cooking).

The Bushman or San people feature in this book; one of their leaders is murdered and because of conflict over a number of land claims, there are a variety of culprits. What led you to the Bushmen and their tragic history?

The Karoo is filled with the spirit of the San (aka Bushmen: hunter-gatherers), their rock paintings, and their ancestors. I’ve had a long-time interest in San culture, and visited Bushman communities, and ancient Bushman sites in Southern Africa. They are the oldest inhabitants of Southern Africa, and have been treated abominably by the territorial invaders that followed. In the central Kalahari (and other places too) they continue to do battle with government and businesses to maintain their rights to land, water, and hunter-gatherer existence. I believe their traditions and practices hold important political, environmental, and spiritual messages for us today.

Tannie Maria finds herself shadowed by a magnificent kudu bull. She realizes that it’s in her mind but it’s a metaphor for what’s going on around her. Spirits in animal form also feature in Bushman myth. What is the kudu saying to the reader?

That kudu bull I describe in my book is based on a beautiful creature that I came across on a number of early morning walks in the Karoo. In the soft light and the quiet, this was a sacred experience for me. He was so gentle, yet so strong. A peaceful, powerful beast.

I also enjoyed eating from the Kudu Stall at the Klein Karoo Arts Festival (the setting for the murder of the Bushman land rights activist), and I relate to the Bushman notion that you take in the properties of the animal you eat.

The reader will decide for themselves what the kudu means to them, but for me, it resonates with other messages in the book related to strength, gentleness and respect for the earth. 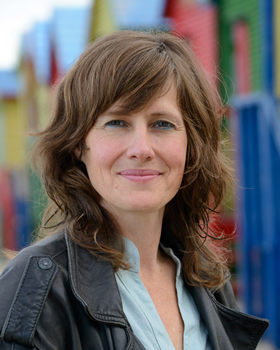 The satanic mechanic himself is an interesting character. He has a checkered background and lives on a farm out of town, but he seems to have a natural empathy for the motley collection who join the support group he leads. Nevertheless, he comes across as having appropriate training. Where did you get the background for this character? Does it overlap with your expertise in adult education?

The satanic mechanic book was conceived (as are all my books) when we were on a long trip into the African wilderness. In this instance we had just acquired a ‘new’ second-hand Land Rover, and were initiated by breakdowns. I lost count at incident number eighteen. We met a lot of mechanics! I was struck by their warmth, kindness and gentle healing powers, so decided to give one a key role in my book.

Yes, there is an element of my adult education workshops in the mechanic counselor’s approach. I also studied psychology and have an interest in healing and in mindfulness meditation. I did check in with experts in PTSD to make sure I was not too far off-track, but this mechanic’s approach is a unique one that I invented.

Will he feature again in future books?

So far he has popped up as a minor character in book three, but we’ll see what happens. My characters don’t always tell me when they’re about to walk onstage.

Once more Tannie Maria has mouth-watering recipes for cooking, and she includes many of them at the end of the book.  Are you still perfecting them with professional chefs? 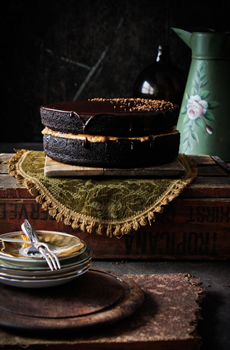 Yes. I do a lot of idea research, and reading of recipe books; but I am not an expert cook, so I always get the help of professionals. In THE SATANIC MECHANIC, I am particularly proud of the Venus Cake (a coffee-chocolate cake with a layer of apricot jam and peanut-butter and melted choc-coffee icing). I came up with the ingredients for this ‘out-of-this-world’ cake, based on things Tannie Maria loves. It took at least 12 attempts (3 mine, and 9 by experts) to develop this recipe to perfection.

You clearly have a great affinity for the Klein Karoo and its people. I believe you built your house there yourselves. Was that a different reflection of artistic talent for you and your partner?

We fell deeply in love with the Karoo. In terms of building, I do words and ideas; my man, Bowen Boshier, is the visual artist. We have a basic mud-brick thatch house and he is building a Karoo-Gaudi-Anthill type structure (with work rooms and guest rooms). It is driving me crazy (because 4 years later it’s incomplete, so we both work-eat-live on the kitchen table) but it’s exquisite.

The Ladismith of your books seems almost idyllic in the way people of different races and backgrounds behave to each other. Is that your personal experience in the Klein Karoo?

Ladismith, like many small towns, does have an intimacy and friendliness that often crosses racial and class boundaries. However, racism and prejudice exists here as it does throughout South Africa. I have encountered some incredibly racist and conservative people. (There are, for example, some sheep-farmers in this region who are very unlike the kind Satanic Mechanic.) I think Tannie Maria and her friends and co-workers are unusually good people. These do exist, but in a far from idyllic context.

Book Three is well underway, but I don’t want to open the oven too early to show you what’s cooking…

For more information about Sally and her books, visit www.sallyandrew.com