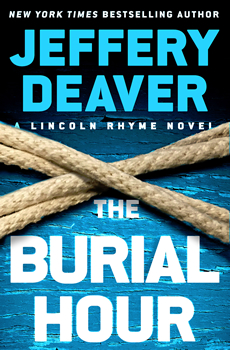 Jeffery Deaver didn’t really plan on his quadriplegic forensic detective Lincoln Rhyme becoming such a hugely popular series character when he introduced him in The Bone Collector 20 years ago. In fact, Deaver originally thought about killing off Rhyme at the end of that book.

“Thanks goodness, I kept Lincoln around,” laughs Deaver, whose 13th Lincoln Rhyme thriller, THE BURIAL HOUR, is out now. “I had running through the first book the theme of assisted suicide. It would have been a legitimate ending, but I said, ‘No, I won’t do it.’ I had a feeling people were going to like this guy.”

In THE BURIAL HOUR, Rhyme and partner Amelia Sachs travel to Italy on the trail of a mysterious suspect called The Composer—who kidnaps a businessman off a New York City street in broad daylight, then posts a videotape of the victim being slowly hanged while eerie music plays in the background.

Like all of Deaver’s books, THE BURIAL HOUR is filled with stunning twists and scary moments for the reader. There’s plenty of international intrigue in this one too, and not everyone is necessarily who they seem. “My theory has always been a book should be like a roller coaster,” he says. “Your palms should sweat, your heart should race….’Oh, my God, am I going to survive the ups and downs?’”

Which is the same approach Deaver used when he created the character of Lincoln Rhyme—a top forensic detective left a quadriplegic from an accident who continues to use his superior knowledge to solve crimes. He thought first about making Rhyme a paraplegic, paralyzed only from the waist down, but then decided to take it even further.

“The way I approach a book is it is so important to have a story that is utterly emotionally engaging. Having him as just partially disabled would have been easier for me to write, but readers would not have been quite as engaged. I have to write a book where the hero doesn’t have any of the tools that traditional crime fighting heroes do. He can’t pull out a gun to shoot or use karate. This is someone who has to live in his mind.”

Working with Rhyme to do all the other police investigative work is his partner Sachs, who loves to shoot and drive fast cars and show up at crime scenes. Rhyme and Sachs also have a…well, unique romantic relationship.

“Lincoln was somebody who didn’t need or want anyone else in his life,” Deaver says. “Amelia Sachs was the same thing. I wanted to bring together two characters who turn the stereotypes on their head a bit. Lincoln was the fellow who stayed at home, while Amelia was the one who used the gun and drove fast cars. They create a whole package of crime solving.

“Romantically, that just developed. It wasn’t really there in the first book. They were mentor and protégé. But she was a former fashion model who hadn’t had a successful romantic history. She was tired of pretty boys, the modeling scene…she and Lincoln developed that emotional and intellectual connection.”

And what about sex? Deaver says it is perfectly possible for a quadriplegic to have sex, but adds: “I’ve never gotten into the gratuitous sex angle in my books. These characters are like our friends. I don’t know the intimate details of my friends’ lives. Whatever happens, happens. I don’t need to know, and I don’t think readers do either.”

A former journalist, lawyer and even (briefly) a folk singer, Deaver is the bestselling author of well over 30 novels overall—including numerous highly-acclaimed stand-alone thrillers and his Kathryn Dance series, featuring a California investigator who specializes in interrogation and body language. He also writes many short stories; was the author of a James Bond novel that became an international bestseller; did a thriller (The October List) told in reverse; and even came out with an album of country-western songs to accompany one of the Dance books. Several of his books have been made into movies, including The Bone Collector with Denzel Washington and Angelina Jolie.

“I always wanted to write,” he says. “My parents encouraged reading. I was reading the James Bond books at seven or eight. I thought I wanted to do that. But I was aware enough that Jackson Pollock or Mozart or Rembrandt were crafting what they did at a very young age, but writers don’t. We need to live life.” 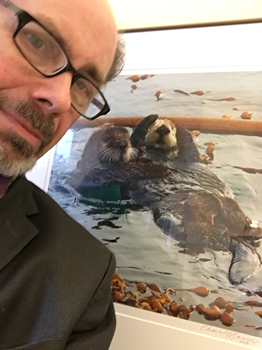 He went to journalism school at the University of Missouri, got a law degree at Fordham, and eventually went to work for a law firm. “I wanted to get a job at the New York Times covering the courts. I thought maybe I’d give law a try for a while and writing at the same time.” He wrote his first few books this way, while holding down a full-time job as a lawyer. “The minute I was able to make enough money from writing fiction, I just left.”

Needless to say, the Lincoln Rhyme books require a lot of research about forensic evidence as well as living as a quadriplegic. But Deaver says he does a tremendous amount of research and planning on everything he writes. He generally spends eight months preparing to write a book—a process which includes producing a 200-page outline of the story.

What’s next for Deaver?

Well, he’s got another Lincoln Rhyme thriller coming out in 2018; a Kathryn Dance book in 2019; plus he’s working on plans for another standalone thriller; some short stories; and even an original movie script.

As for what he likes better—writing about Lincoln Rhyme or doing other books and projects—Deaver said he just enjoys it all. “I have no preference. I make a living writing fiction. I love it.”

The Measure of the Moon by Lisa Preston