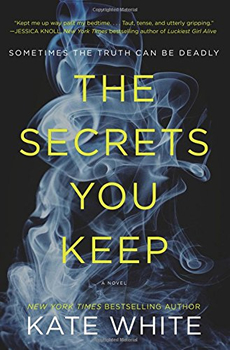 Plenty of thriller protagonists find their lives or homes infiltrated by strangers who mean them harm; in the burgeoning genre of domestic suspense, though, they discover they may have already invited the threat inside.

Such is the case for Bryn Harper, the character at the center of Kate White’s latest standalone psychological thriller. In THE SECRETS YOU KEEP, Bryn, a successful self-help author, is struggling to get her professional life back on course after being seriously injured in a car accident that killed her co-worker. She and her husband, Guy, have temporarily fled New York City for a quieter life in Saratoga Springs, but Bryn’s hopes of an idyllic retreat are shattered when a woman with ties to her husband is brutally murdered. When Bryn turns amateur sleuth, she finds that her husband might not be the man she thinks she married, and that his secrets have brought a killer into their lives.

“Part of [the inspiration] was the realization that, even though I was the editor of Cosmo and had written, at this point, ten books, I had never written a book about a character who’s married,” says White, who phoned in from her winter haven in Uruguay to discuss the new novel. “I guess I thought there might be a certain amount of freedom in having the character not be in a relationship. But I think it’s something we’re all afraid of in some place in our relationships–that maybe we don’t know the person as well as we think we do, and that there may be something about that person that you’ve never learned, and you’ve got to deal with that realization. I just wanted to play with that in a psychological thriller.”

Kate at Bouchercon ’16 with author pals Sara Blaedel and Karin Slaughter, who she calls not only “amazingly talented but fabulously generous.”

White’s latest page-turner makes such cracking good use of classic thriller techniques and devices—with its hairpin plot reversals, lingering questions about identity, and pervasive sense of menace, it’s not hard to imagine Hitchcock thumbing the pages appreciatively on a sunny Hollywood veranda. But it’s a very different cycle of classic mystery yarns that White cites as a key influence, especially where her trademark cliffhanger chapter breaks are concerned.

“When I first started writing mysteries–I’ve always wanted to, but when I finally felt I could take the time on Saturday and Sunday mornings to start doing it–I reread some Nancy Drew books, and they have the best chapter endings,” White explains. “It always ended with, ‘”Nancy, look out!” George shouted,’ and then you’d want to go on to the next chapter. That was really informative for me, to read those and be reminded of that structure and how, if you think in advance about where and how you want to end [a chapter], it’s possible to do it. When I first start writing a chapter, I’ve already plotted out what’s likely to be the end of it.” 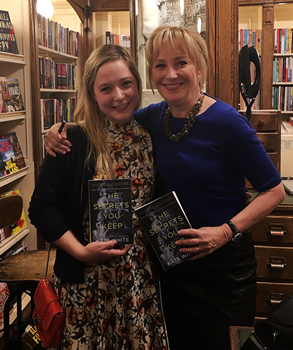 Kate with daughter Hayley, who “I’m proud to say, inherited my love of the macabre.”

Over the course of five stand-alone thrillers and six mysteries featuring true crime journalist Bailey Weggins (a seventh is due out this fall), White has settled into a technique that skirts the boundary between outlining her plots and giving her imagination free rein as she goes along (or “plotting” and “pantsing,” as the opposing techniques are familiarly known to writers).

“I’m always sure of who the killer is and why they did it, and then I have a pretty rough idea of the overall storyline,” White says. “I usually try to loosely plot out three to four chapters at a time with my big-picture outline in mind, and that’s where you end up with a certain amount of serendipity, at least for me, where all of a sudden I discover something about a character I didn’t know, or maybe I’m doing some research and discover, ‘Oh, my gosh, that could add to something I hadn’t planned in this chapter.’ ”

A couple of those fortuitous events occurred while White was researching the Saratoga Springs area for SECRETS (prep work that forced White to such grueling measures as staying at the famed Saratoga Arms hotel and getting massages at the city’s legendary spas). One of those occurrences strays too far into spoiler territory to detail here–suffice it to say that White was enthralled and inspired by the history of the town’s mineral baths–but the other is the stuff writers’ dreams are made of: White’s research trips to Saratoga brought her face-to-face with one of her characters. 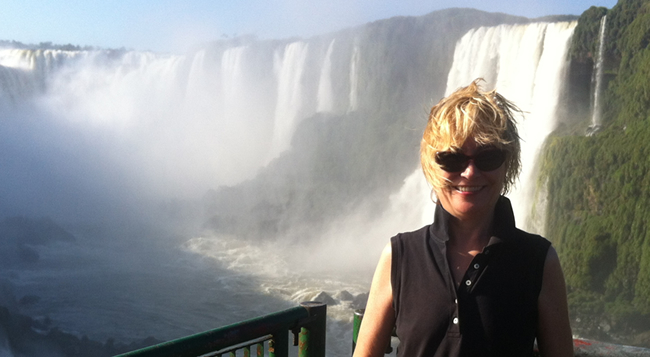 Play Misty for Me: In the winters, Kate lives in Uruguay with her husband and loves to take side trips to other parts of South America, like Iguazu Falls in Brazil.

“There was one character I didn’t feel I had a perfect handle on,” White explains. “I had a sense of how she looked and what her motivations were, but I just couldn’t picture her in my mind. And while I was up there, I took a walk down Broadway, which is the main street. I was going to have a salad at the bar of this restaurant, but I stopped at the bookstore first, and as I was in the bookstore, the character walked into the store. I just saw her and knew it was her. I started following her around the store–she looked at me weirdly, like, ‘Okay, this woman is stalking me.’ And then when I went to the bar to have a salad and a glass of wine, she walked in with a friend, so I actually got to study her and take some pictures. She won’t recognize herself, but it was the most weirdly magical thing that ever happened to me.”

While White’s breakneck plotting draws inspiration from the adventures of a character that first appeared in 1930, Bryn is a thoroughly, fiercely modern protagonist. White says she has little use for the “damsel in distress” character model, preferring to populate her thrillers with women who get the job done. She also avoids the pitfalls that threaten to ensnare some female-driven thrillers; White felt it was more important to make Bryn relatable than to make her ingratiating. 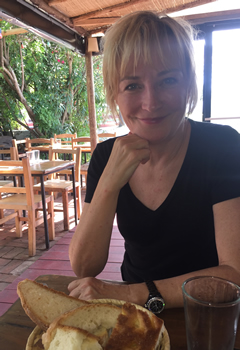 While in Uruguay each winter, Kate says she generally gains five pounds, thanks in part to the the grilled meat, grilled veggies, and papas fritas at La Cantina del Vigia.

“I guess I felt like, based on the fact that she’d been in this accident, it was hard to make her totally loveable and likable,” White says of her vividly drawn protagonist. “She’s frustrated because she’s got writer’s block. There are these issues still from the accident that she doesn’t totally understand. The guy who was driving her and was killed in the accident ran the car off the road and she just doesn’t remember those final seconds, so she doesn’t know–did he commit suicide? Did he fall asleep at the wheel? So I think that she’s got a certain amount of frustration, and she’s a basically together person who deals with people well and isn’t any kind of a diva or bitch, but at that moment in time, she isn’t Rebecca of Sunnybrook Farm.”

White’s characters, particularly Bryn, represent a perfect union of White’s two professional lives: Besides her status as a New York Times bestselling thriller author, White has parlayed a 14-year tenure as editor-in-chief of Cosmopolitan magazine into a successful stint as a writer of career advice books and popular speaker on the business conference circuit. She says she’s found significant crossover between the two fields, particularly when it comes to the necessity of fresh challenges.

“If you feel you’re in a comfort zone, your readers are probably going to feel it too,” White says. “You have to figure out how to push yourself—is there a way to go big or go home? When I give business speeches, I always tell people that with every idea you’re working on, step back and ask yourself the four B’s: could this be bigger, better, bolder, or more badass? That really resonates for women, because it’s a tool that forces you to not just do it the way it’s always been done before. And I think that’s good for authors too.”