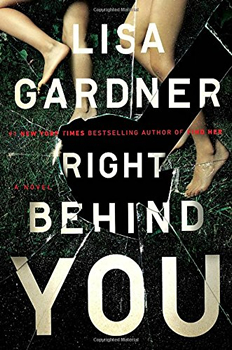 There is a maxim in publishing that among the various types of genre writers out there, thriller novelists are the nicest people. The theory: these smiling, helpful folks are getting all the darkness out on the page.

If this phenomenon is true, then Lisa Gardner is a leading example—for a number of reasons. Living in New England with her family and pets, she contributes hours to the Child Services agency in her area, particularly foster children with special needs. She not only enjoys meeting up with fellow authors at conferences—“I love the community of writers,” she says—but has gone above and beyond to write detailed (and freely available) advice for aspiring novelists, including synopsis critiques.

And then you come to her thrillers. They are … terrifying.

Gardner knows she’s scaring people to death, and, well, she’s happy about it. “We like our thrillers because they are an adrenaline rush after a long, hard day,” she says.

But where do the devilish twists and turns, the harrowing moments of harm, bubble up from? “I’m honestly not sure where the ideas come from,” Lisa admits on her website. “They simply come to me, particularly creepy, scary ones. I guess it’s a good thing I can turn ideas into novels, because being an ax murderer doesn’t pay nearly as well.”

Her new thriller, RIGHT BEHIND YOU, which hit Number One on The New York Times hardcover bestseller list, begins with the discovery of a number of murders the same morning in a small Oregon town. No one knows where the suspect, Telly, a teenage boy in a foster family, will appear next, and fears mount for the safety of his younger sister, Sharla, just about to be adopted by retired FBI profiler Pierce Quincy and his partner, Rainie Conner. When they were children in a violent home, Telly saved  Sharla’s life. Now she must figure out the answer to the question, Is her brother a hero or a killer? The wrong answer could get more people killed. 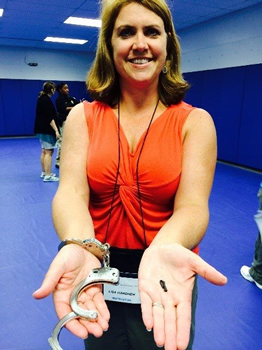 The idea for the novel came from, initially, her readers. Gardner has written more than 25 books, many of them bestsellers, and most recently concentrating on the Detective D.D. Warren series. She ran a poll on Facebook asking which kind of book readers would most like her to write next. To her surprise, they asked for the return of the FBI profilers, the type of thriller she wrote earlier in her career. “I had to reread some of my own books” to plunge back into the world of Quincy and Rainie. “I had some homework to do.”

Gardner decided to write about “spree killers,” setting herself a special challenge, fiction wise. “I’d never written about spree killers before. These are very time sensitive, urgent situations, because once this person has had that psychological break, they will now shoot anyone who crosses their path.”

The next idea for the book came via a gun magazine her husband brought home. “I was flipping through, and I noticed an article on fugitive trackers. Now so many law enforcement departments are getting into technology and all the Infrared, but when you get into these truly mountainous areas, it doesn’t work. There is just no substitute for boots on the ground, old-fashioned tracking. Since I already knew I was going to do a spree killing plot, I thought, ‘This is fascinating.’ It became my new forensic subject, because on every book I want something cool to learn.”

It turned out Gardner loved every minute of researching fugitive trackers. “It’s some of the most dangerous law enforcement work you can do. Almost always in those situations, the person you’re tracking does not plan on being caught and they’re not going back.” 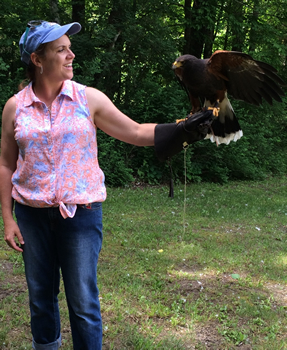 With her falcon, Mycroft.

For Gardner, the law enforcement characters are particularly rewarding to write. “One of the things I love about suspense novels, whether I am researching them or whether I am getting to read them, is it really does give you an appreciation of the people out there doing the work, and what that call to serve really means.”

Gardner has seen trends come and go in suspense fiction. She sold her first book at age 20 and has seen big changes.

“I think the writing has definitely evolved,” she says. “When I started out, it was Silence of the Lambs, and all thrillers need to have serial killers, and yes, you can have a strong female FBI character like Clarice Starling, but the books need to be violent, they need to be dark, and the stories need to be how the work strips away a detective’s soul.”

Gardner continues, “Now we’ve gotten more action oriented. I think that the kick-ass heroine who is not just smart but physically strong is very popular. We want to see them as more human, not destroyed by their work but recognizing the toll and making an effort to be human despite it.” 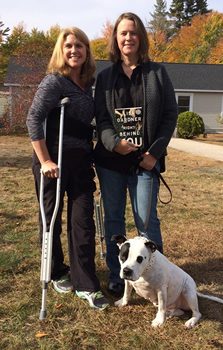 Lisa Gardner with Deb and Molly the rescue dog.

She has nothing but praise for the groundbreaking antagonists that Thomas Harris wrote, not just Hannibal Lecter but the murderer in his novel Red Dragon, the only and only Francis Dolarhyde. “The villains really matter,” she says. No kidding. In Gardner’s fiction, the antagonists can cost readers a good night’s sleep. Just one example: In The Perfect Husband, a woman goes into hiding when her husband, a serial killer and a clean-cut handsome cop, breaks out of prison with one goal: kill the wife who turned him in, and he’s using all of his law enforcement knowledge to track her.

Gardner will always relish creating the horrific villains and the twisty, intricate plots. “I love a good puzzle,” she says. Still, these are changing times, and adding a new level might be called for in thrillers, she says. “If it’s a super-dark book with a hero who’s often depressed, that’s too much. with all that’s going on in the news.”

It’s not about getting rid of the danger, the chills, she explains. “Now we’re looking for characters making that extra effort to rise above. We’re looking for heroes who can do the hard part but still figure out how to live.”

And if anyone can deliver these kind of characters, it’s Lisa Gardner.