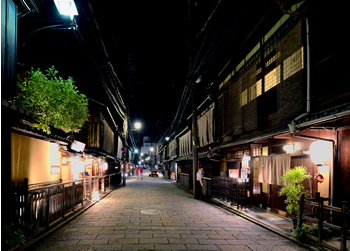 For many people Kyoto is the heart and soul of Japan. While Tokyo is the modern capital, Kyoto carries the distinction of having once been the ancient capital and home to the emperor and the imperial court. This arrangement lasted for more than a thousand years, from 794 A.D. until 1868, when the era of the samurai came to an end and Japan allowed in Western practices.

In Kyoto, Japanese culture flourished and much of what is cherished about the traditional ways found early expression in the lively city of old—from the elegantly arranged cuisine and the exquisite handcrafted items to the ethereal calm of age-old temples and gardens. 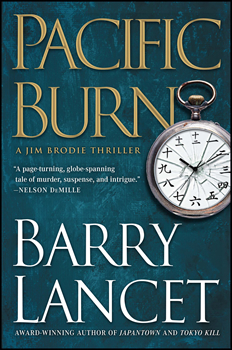 I’ve been to Kyoto more times than I can count, but no matter how often I visit, I am invariably drawn back. And so for my novel PACIFIC BURN, I decided readers and Jim Brodie, the main character in the book, should get their chance too.

By mid-story, Brodie has arrived in Tokyo. He’s tracking a hired killer who shot at him and a friend in San Francisco. The friend is in a coma and may not come out of it.

Brodie is furious, and determined to find the culprit. He receives a summons from a colleague who is also working the case…

Noda rang with a phrase of his I’d come to dread:

“Bad news,” the chief detective said by way of greeting.

“I’m heading to Tokyo Station. Need you there too.”

Japan’s high-speed trains—shinkansen in Japanese—were a phenomenon. The fastest version covered the three hundred mile stretch between Tokyo and Kyoto in about two hours and twenty minutes.

This is a chilling message for Brodie, who had placed his friend’s family under protection after he realized they might all be in danger.

Brodie hits Kyoto running. The errant son is spotted but Brodie misses him by minutes. Later in the chase, a 400-year-old temple comes into play. 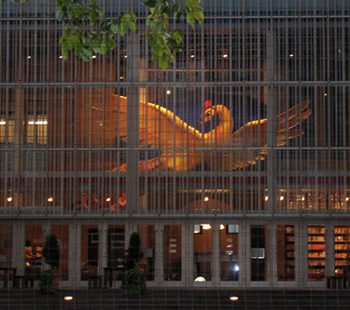 While known for many attributes, Kiyomizu temple’s most distinctive feature is that “it floats in the sky.” Incredibly, its main prayer hall rests on an open-air crosshatch of interlinking pillars and beams rising five stories upward without the use of a single nail or bolt—only intricate Japanese joinery techniques secure the platform.

Tucked away in the foothills overlooking the city, the Buddhist refuge also offers a stunning view. A character looks out over the scene:

Yumiko gasped. She’d never seen such a thing. When her boyfriend had removed the blindfold, she found the whole of Kyoto spread out below her. The ancient capital was awash in luminous moonlight and a sprinkling of city lights that stretched below her like a vast glittering carpet.

Next up is the expansive grove of giant bamboo in the Arashiyama district of Kyoto, a picturesque rural locale on the city’s western flank that many first-time visitors miss. 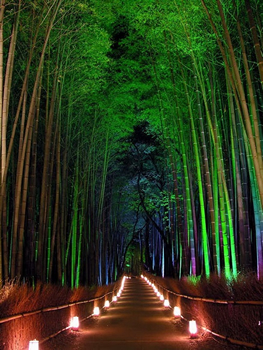 The majestic beauty of Japan’s giant bamboo is an enchanting sight. Emerald-green stocks wider than a man’s fist tower 50 feet overhead. A stroll through the shaded stand of giant bamboo calms the nerves and elicits thoughts, if only briefly, about one’s place in the world.

Despite the otherworldliness of the setting, a cloud hangs over Brodie’s foray into the district. The bamboo forest is the designated meeting place between him and his adversary. The rendezvous takes place at night, and Brodie is ordered to come alone. The grove is illuminated, which allows for some visibility, though not enough:

“Glad you could make it, Brodie.”

The words were relayed in a whisper reminiscent of steam pushing itself loose from a covered pot. A low brooding hiss of a sound that was hot and moist on the back of my neck.

“The pleasure is all yours,” I said.

“It suits my needs,” my unseen host said.

We were ambling down a walkway that cut through a forest of giant Japanese bamboo. A low thatch fence framed the trail on both sides and prevented visitors from penetrating the grove. Fifty-foot stalks shot into the night sky, their leafy green tops curving inward and enveloping us in a tunnel of darkness. Dim amber floodlights illuminated the base of the bamboo and rose to meet a second line of vivid blue-and-green illumination, brightening the sides of the living tunnel while keeping the viewers in semi-darkness.

All of which allowed the man behind me to hide in plain sight.

And so, one of Kyoto’s most elegant natural settings takes on ominous undertones even as it adds a measure of depth to the scene.

Kyoto is also a city under siege. Modernity is encroaching. Some see an ongoing struggle. Others say it is merely a gentle tug-of-war, as preservation takes hold and an equitable balance is reached.

What’s happening is this: the younger generations want bright and shiny, not the subdued classical elegance the rest of the world cherishes. At times, the clash can take an unexpected turn—such as when an old elementary school in the center of town is converted into a museum.

And not just any museum, but a homage to Japanese pop culture. When this happens in the ancient capital, battle lines are drawn.

But it is a done deal. The International Manga Museum celebrates manga and anime, which are Japanese comic books and animated movies, respectively. Tens of thousands of books and collectables fill the museum’s shelves and exhibition halls, and each year thousands of young people from around Japan and the world pass through its doors.

The temple that “floats in the sky”: Kiyomizu
(Photo credit: panina.anna)

In recognition of this faceoff, it made sense to set a scene at the youthful repository. It is here that Brodie and his assistant Mari have another chance to catch up with the youngest son, who is an aspiring comic book artist.

We mounted a staircase to the third floor and crossed a skywalk over an atrium. From our perch, we looked out on an Astroturf-covered courtyard and had a close-up view of a giant phoenix, the main character from pioneering cartoonist Osamu Tezuka’s story of the same name. The sculpture was resplendent in yellow plumage, sky-blue eyes, and a sparkling red cockscomb.

We turned a corner.

Ten feet away a woman in her early twenties had settled on a cushioned chair with a Japanese comic book.

“Someone you know?” I asked, instantly alert, glancing first at the woman, then back the way we had come, then into every corner and the hall beyond.

No unfriendlies. No one advancing on us.

The son was not as naïve as I had hoped. He’d sent an emissary in his place.

And so the hunt to rescue the son from himself before the killer finds him continues. 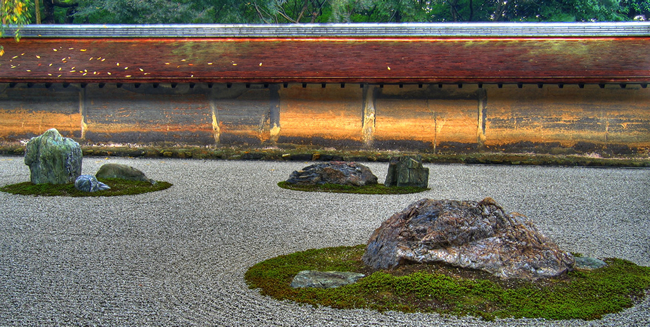 These are only three sites from a long list of worthy attractions Kyoto has to offer. Add to them, say, a stroll around the renowned rock garden of Ryoanji temple, an evening walk through the geisha quarter known as Gion, or a meandering turn down the cobbled lamplit lanes of Pontocho for a meal or a nightcap and you have yourself a trip for the record books. And one that will most certainly bewitch you and leave you with the thought of one day returning.