The Lure of Jack the Ripper 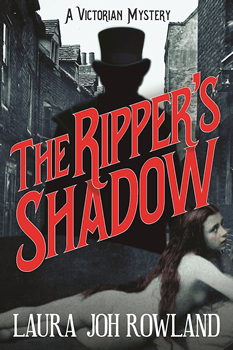 The Whitechapel murders of a string of prostitutes hold our fascination 128 years later. The latest writer drawn to the time and place of Jack the Ripper is Laura Joh Rowland. Her novel THE RIPPER’S SHADOW features a nuanced main character, a female photographer named Sarah Bain with her own secrets. After two of her subjects are murdered by “Saucy Jack,” Bain suspects a connection between her work and the brutal murders. As Kirkus says, “An intrepid female photographer tracks the serial killer of the (19th) century…keeps suspense high.”

Before writing THE RIPPER’S SHADOW, Rowland penned an acclaimed mystery series featuring Sano Ichiro, a samurai and private investigator for the shogun, in the 1600s in Edo, Japan. She’s also written a historical suspense series featuring Charlotte Bronte. Rowland tells The Big Thrill about switching it up.

How long have you been interested in the East End of Jack the Ripper and do you remember what first sparked it?

I’ve been fascinated by Jack the Ripper and Whitechapel since I saw the original Star Trek episode in which he was a disembodied evil force that drifted through time and space, murdering people. The episode showed me that there are many different ways to tell the same sensational story.

Why do you think the obsession with Jack the Ripper has never waned?

It’s because he was never caught or identified, and he’s the ultimate bogeyman. His catchy nickname helps keep him in the collective consciousness.

In your book, you have very creative and interesting ideas about the Ripper murders. Did you develop your theories before you began the book or did they evolve as you wrote?

I don’t believe that the Ripper was any of the suspects that the police identified at the time, and I’ve always liked the idea that he might have been dealt with privately by someone flying under the radar. That’s the premise of my book. Premises are easy. The hard part is building a whole fictional world upon them. Since I wasn’t going to write a story that focused on the real historical suspects or police detectives, I had to invent my own suspects and sleuths.

Was it difficult to say goodbye to your former series and to setting books in Japan?

I was ready for a change, and the nice thing about a series is that whenever I’m missing my characters, I can open one of the books, and there they are. It’s not goodbye forever.

What is the best part about writing a mystery that it is interwoven with a series of crimes famous in history? What is the most challenging part?

The best part is creating my own version of the crimes and contributing to the legend. The most challenging part is finding something original to write about something that’s been written about so many times.

How did you come up with the idea of writing a female photographer and is she based on a real person?

How do you balance the emotional development of your characters with the crime plot?

The emotional development needs to happen in conjunction with solving the crime. Sarah Bain is a solitary, closed-off woman who learns to open herself up to friendship and love while she’s hunting the Ripper in the mean streets of London.

What is the most important lesson you can pass on to fellow writers on generating suspense?

Tension on every page. If things are too pleasant, if the characters are getting along too well, and if there’s no threat, that’s dull.

How do you get the readers of your Sano series prepared for your new work?

I ended the series with a grand finale, The Iris Fan, which concluded the main plotlines and character arcs that went on throughout the series. I think it was kinder to my readers than if I’d just stopped and left everything hanging. I announced on my website and on Facebook that it was the last book, and I posted updates about my new series. Some readers may not have gotten the message, and if they’re expecting a new Sano book, they’ll be surprised by THE RIPPER’S SHADOW.

What is the premise of your next book?

The next book is the second episode in the series featuring Sarah Bain and her friends Mick O’Reilly and Lord Hugh Staunton. They start a private detective agency, and their first big case is a kidnapping that I based on the Lindbergh baby kidnapping from 1932.

That sounds fascinating. Thank you.

Crime and Catnip by Toni LoTempio