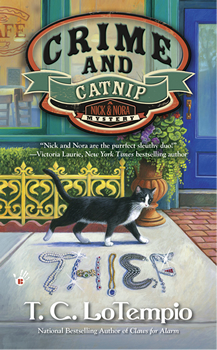 Cats were revered as gods in ancient Egypt. Although we can’t know if cats realize those days are gone, some cats still get special treatment. If you don’t believe me, just ask Rocco. Rocco is not only the quintessential muse for author Toni Lotempio, but also this particular feline became a character in the Nick and Nora series for Berkley Prime Crime.

Nick and Nora aren’t just pussyfooting around this time as they deal with a missing person’s case and murder. While catering a gala for the Cruz Museum, Nora Charles agrees to look into the disappearance of director Violet Crenshaw’s niece, a case previously undertaken by her frisky feline friend Nick’s former owner, a private eye whose whereabouts are also currently unknown.

CRIME AND CATNIP is the third book in the series, and TBT had the opportunity to catch up with the cat-loving author.

What is different/new with Nora in this adventure?

Well, since Nora’s old college crush, Leroy Samms, is now in Cruz there’s a bit of romantic conflict there since she’s dating FBI guy Daniel Corleone.  Also, she’s a bit more focused on this mystery because of it’s possible tie to her cat’s owner.  The reporter in her would like to solve the mystery of his strange disappearance, and the cat owner in her wants resolution about feline Nick’s ownership.

Was the research about King Arthur difficult?

You can find pretty much anything you want on Wikipedia these days  J  I actually consulted a psychic who used the Arthurian Tarot for background on it.

Nick is based on Rocco, but when did he become a character? In other words, was he always an integral part of the plot or was it a later addition?

Nick the cat was always, first and foremost, meant to be one of, if not the main, character in the Nick and Nora mysteries. In the original manuscript, Nick the cat was actually the reincarnation of the detective and, as such, the cat talked and gave sage PI advice to Nora. When the book went before the editorial board, they loved everything about it EXCEPT the fact that the cat talked.  He could do anything else except that. So, I had to comeup with another concept for the cat to communicate with Nora, and I came up with spelling out clues with Scrabble tiles.  Then I had to create another character to take the cat’s dialogue. I came up with the character of Nick Atkins’ partner, Oliver Sampson, and split the dialog between Ollie and Chantal, Nora’s BFF.  I did all this in three weeks.  Then back the book went, and there were delays – that was the year Hurricane Sandy hit the NY/NJ area.  Finally in January of 2013 my agent called me to tell me that the book was accepted.  It took from April 2012 from when we first submitted to January of the following year.

How much of the interactions between Nick and Nora reflect the real-life relationship of Rocco and Toni?

Probably everything except spelling out clues for me with Scrabble tiles LOL.  ROCCO has truly been the inspiration for the character of Nick.  When I write Nick, ROCCO is always there, doing something that inspires me to add it in.  ROCCO is also a premier interviewer, running his own blog, and interviewing authors on a weekly basis!  Right now, though, he’s a bit perturbed because the main cat in my new Cat Rescue series for Crooked Lane is NOT modeled after him, but his brother Maxx!  I think he’ll get over it, though – especially if I put extra food in his bowl.  One thing Nick and ROCCO definitely have in common is their weight – ROCCO weighed in at 23 pounds when last on the scale!

Do you enjoy cooking as much as Nora?

To be honest, I never did enjoy cooking until I bought a Rangemate on QVC. Now I love it!!!!!!!  The choice of profession came about because I studied all the cozies that were out at that time, and I didn’t see one that featured a sandwich shop!!!!!

Assuming Cruz in your series is not the same as Santa Cruz, how did you develop the town as the setting for the series?

Cruz is not Santa Cruz, but is rather a combination of towns in the  Monterey/Carmel/Pebble Beach area.  I have a dear friend who lives in Pebble Beach and whom I’ve visited several times. I love that area, and I just thought it would be a good setting, since so many cozies seem to be set on the East Coast.

Cozy Mysteries tend to follow guidelines about language, sex-scenes among others. Do you think they limit your creativity or do you take it as a challenge?

In the beginning it was a bit of a challenge, as I started out writing horror and thrillers and I do have a tendency to get a bit graphic. J  Cozies don’t even really like you to use “hell” or damn” although I did manage to slide a few in – and some readers did get upset, so  now I’m pretty careful on the language.  After all, I can’t remember Jessica Fletcher ever saying ‘damn’ once on her tv show.

Definitely Mary Higgens Clark and James Patterson. They are the king and queen of suspense as far as I’m concerned. I also have found Erle Stanley Gardner, Agatha Cristie to be considerable influences as well.

If you could go back in time, who would you like to meet and why?

And the answer is Anne Boleyn. I’ve always been fascinated by that era, Henry and his wives in particular, and I’ve always felt that Anne Boleyn and I had a ‘connection’.  I was in England in 2001 and we visited her burial site.  I swear I could feel her there with me. 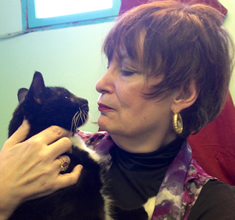 While Toni Lotempio does not commit – or solve – murders in real life, she has no trouble doing it on paper. Her lifelong love of mysteries began early on when she was introduced to her first Nancy Drew mystery at age 10 – The Secret in the Old Attic. She (and ROCCO, albeit he’s uncredited) pen the Nick and Nora mystery series from Berkley Prime Crime – the first volume, MEOW IF ITS MURDER, debuted Dec. 2, 2014. Followed by #2, CLAWS FOR ALARM. #3, CRIME AND CATNIP, is out this December. She, Rocco and Maxx make their home in Clifton, New Jersey, just twenty minutes from the Big Apple – New York. Catch up with them on her website and blog.