Teaming Up With NASA 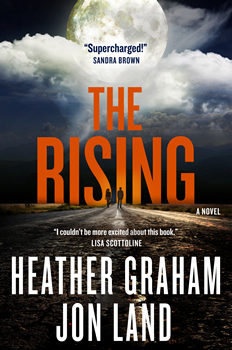 NASA has long acknowledged the role popular culture can play in cultivating an enthusiasm for science and discovery, especially in young people. From opening its facilities to a long line of writers and filmmakers, to producing a series of gloriously geeky, blockbuster-inspired publicity posters for its International Space Station expeditions, the organization has thoroughly embraced its dual status as a scientific trailblazer and pop culture icon.

The agency further cemented its relationship with the publishing industry in 2011, when it announced a partnership with leading sci-fi and fantasy publisher Tor Books to produce a series of novels described as “NASA-Inspired Works of Fiction.”

The latest product of that union is THE RISING, a breathlessly paced young adult thriller from bestselling authors Heather Graham and Jon Land. The story centers on Alex Chin, a high school football star whose adoptive parents have been less than forthcoming about the boy’s past, and Samantha Dixon, an ambitious young NASA intern who harbors a not-so-secret crush on Alex. When Alex’s parents are murdered, he and Sam are thrust into a terrifying race to uncover the bizarre mystery of his true origin—if they can manage to outrun his parents’ seemingly otherworldly killers.

Given NASA’s involvement with the project, it’s no spoiler to say that Graham and Land’s science-fiction thriller is as heavy on science as it is on thrills. When the young heroes aren’t fighting for their lives, they’re trying to wrap their heads around quantum physics, astrobiology and other lofty techno-geek concepts.

The Big Thrill was happy to invite the duo to talk us through the finer points of deep research, co-authorship, and their high-flying collaboration with the world’s most iconic science institute. 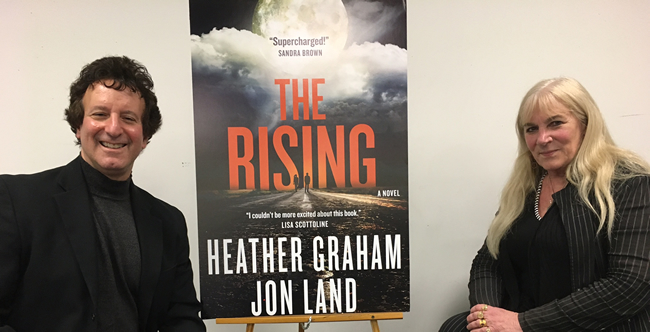 What brought the two of you together to this turning point: co-authoring a science-fiction thriller?

JON LAND: Tor Books had partnered with NASA on a series of science-themed books aimed at educating kids on what NASA is all about and to stimulate their interest in science. Since we’d wanted to work together on something for a while, this seemed like the perfect fit.

HEATHER GRAHAM: Bob Gleason, our editor at Tor, managed to set up these great trips to the Goddard Space Center for us. Amazing! I don’t think I would’ve had any interest in writing a book like THE RISING if I hadn’t been so inspired by meeting and listening to the scientists down there.

JL: I actually couldn’t make those trips and feel I really missed out on something. Then we decided to set the book out West, closer to NASA’s Ames Center for Astrobiology, and both of us can’t wait to get out there someday.

Can you tell us a little about the mechanics of your writing process?

JL: First, we have to give our publisher, Tom Doherty, [thanks] for being part of the process from the very beginning. The three of us mapped out an incredible amount of the book at the same lunch where the idea, the entire notion of us working together, was conceived. The development process continued based on a back-and-forth between us—talking out what was going to happen to the characters, along with where and when.

HG: Yes, we had a great time talking about them. I think we’re just incredibly lucky in that we have a great rapport and seem able to build on each idea the other throws out.

JL: Exactly! We understand what each of us does well and, maybe, not as well. Heather left the action scenes to me, for example, but the wonderfully natural way in which the relationship between Alex and Sam develops is all Heather. I’d write a block of pages, send it to Heather who’d polish and add the next block of pages. I’d give those pages my polish and then write the next section and so on.

THE RISING centers on a pair of fascinating characters: a high school football star raised by his adoptive Chinese parents, and a female science prodigy who serves as his ally, protector, love interest, and all-around foil. Can you tell us a bit about developing those characters? 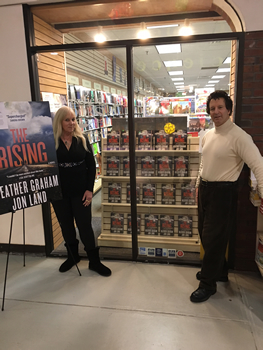 HG: I think it’s something we often come across in life—not so much love at first sight, but incredible admiration, and then caring more and more deeply as you come to realize just how wonderful another person is. Life can be so superficial. I think that it was important to us that Sam and Alex come together in a far deeper way—and that what talents and assets each has work to help them both grow.

JL: Wow, that’s a great question, and I echo Heather’s comments entirely. I’d also add that this is really a hallmark of her work and what has made her a master of romantic suspense. Not too far into the book (spoiler alert!), Alex loses the two closest people he has in the world. So part of his growing attraction to Sam is that she’s all he has left, and she sticks with him against his own protestations to get herself out of harm’s way. That reveals so much about both their characters and, for me, the real treat is watching Sam’s attraction to Alex growing from a simple high school crush to something much deeper than that.

HG: Sam’s growing up to be a very modern woman, determined, brave, and sure of herself—and yet ready to listen and learn. She can stand alone, but is happy to lean on someone she loves.

JL: She’s fiercely independent, disciplined, and very goal-oriented. But her loyalty, friendship, and ultimately love for Alex trumps all of that. The nature of her heroism is defined by her willingness to sacrifice what’s most important in her life so someone she’s very close to won’t be left alone. That’s what makes a great friend, the best possible friend, and the fact that Alex and Samantha start out as friends before they fall in love will help define their relationship in a way that assures it will endure for many books to come.

Science and technology play a key role in THE RISING, particularly in the storyline dealing with NASA’s Ames Research Center. What kind of research did you do?

HG: The fantastic trip to Goddard! It was incredible to have so many scientists who were really involved in everything going on there ready to help us and answer our questions. It was living a bit of a dream for a few days. And I think, too, something we’ll use more of in the future. We learned more about the incredible advances in medicine and weather forecasting and other sciences—all made possible through the efforts of scientists working toward a better knowledge of outer space and the universe.

JL: I did lots of more traditional research and also passed the book through a few experts, one of whom helped design a futuristic, organic computer chip for me and also helped out with some of the other more quantum-oriented science. See, the worst person to write a book heavy into science is somebody, well, heavy into science. Because what they write may be too reliant on technical jargon and not enough on story. I think we strived to include just enough science to fulfill the great Robert Louis Stevenson’s mantra that “it doesn’t matter to me if you believe what I’m writing is real, all that matters is that you do not disbelieve it.”

What’s the most valuable thing you learned from your co-author while working on THE RISING?

JL: That it’s okay not to have everything be a plot point. I had originally proposed that Samantha, who loves science and dreams of working at NASA, has parents who are vehemently anti-science. So to pursue her dream she has to sneak around and keep things from them. Fine for a hardcore thriller, but Heather suggested a lighter touch by making Sam’s parents marijuana farmers who grow weed for dispensaries. And I can’t tell you how much more effective that was than my idea.

HG: I learned how to let go and trust Jon when it sometimes came down to final checks and proofs. He’s actually way better than I am most of the time! Because we are usually working alone, we expect that we’ll always have a last look. Sometimes, it was super nice to think, wow, I don’t have to worry—I know that Jon has our backs!

And words of wisdom for writers who are considering co-authoring a work of fiction?

JL: Wow, that’s actually a tougher question than it sounds, because every pairing requires its own rules. I think, generally, the ideal pairings (like ours!) pair authors who complement each other’s strengths instead of sharing the same strengths. Also, with Heather and I, our decisions were always based on what content best serves the story. And, finally, you need a supportive publisher, someone like Tom Doherty, who supports the project enough to negotiate the minefield of dueling publication schedules and clashing egos. The latter was never a factor for Heather and I, but I can [imagine] how with other collaborations it easily could be.

HG: I think you have to love and respect each other’s work, first and foremost, but, of course, that’s never enough. Two people might be best friends who just might not work well together. I think I had only ever collaborated on a short story once before Jon and I started this—and that was with F. Paul Wilson. I adore him and his characters and stories and style, and that’s how I feel about working with Jon. Know that your ego will take a few blows—because you’re capable of admitting the other person is right. Also, be ready to explain and push a point when you think you’re right. Our biggest problem at first was being too nice to each other! 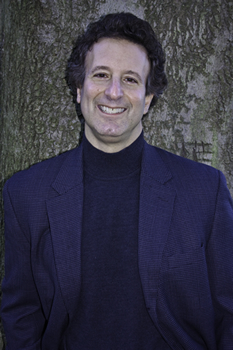 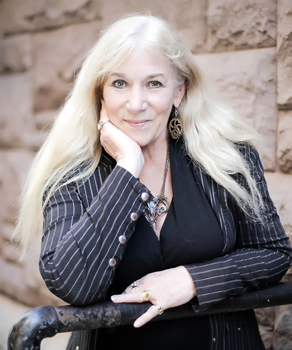 New York Times and USA Today best-selling author Heather Graham majored in theater arts at the University of South Florida. After a stint of several years in dinner theater, back-up vocals, and bartending, she stayed home after the birth of her third child and began to write, working on short horror stories and romances. After some trial and error, she sold her first book, WHEN NEXT WE LOVE, in 1982 and since then, she has written over one hundred novels and novellas including category, romantic suspense, historical romance, vampire fiction, time travel, occult, and Christmas holiday fare. She wrote the launch books for the Dell’s Ecstasy Supreme line, Silhouette’s Shadows, and for Harlequin’s mainstream fiction imprint, Mira Books.

Heather was a founding member of the Florida Romance Writers chapter of RWA and, since 1999, has hosted the Romantic Times Vampire Ball, with all revenues going directly to children’s charity. She is pleased to have been published in approximately twenty languages, and to have been honored with awards from Waldenbooks. B. Dalton, Georgia Romance Writers, Affaire de Coeur, Romantic Times, and more. She has had books selected for the Doubleday Book Club and the Literary Guild, and has been quoted, interviewed, or featured in such publications as The Nation, Redbook, People, and USA Today and appeared on many newscasts including local television and Entertainment Tonight.