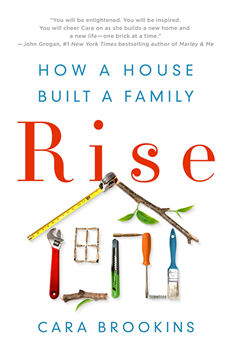 Cara Brookins’ memoir has three sentences alone on a front page. They read: “Our task was both extreme and simple. My family needed sanctuary. So we built it.” And build it they did.

The family needed to escape domestic violence. They required a new place to live. Cara had to keep her four children safe. Give them peace. During a Thanksgiving holiday they retreated to a cabin in the woods. While there, they entertained themselves by building a model house of twigs held together with sewing thread. By the time the weekend was over they began to think they could build a real house. One that was theirs. A safe haven in which to heal.

RISE, HOW A HOUSE BUILT A FAMILY is the story of that build and the strength they found along the way.

How did you come to write this book?

When we were building I never had any intention of writing about it. We were embarrassed to be in the financial and emotional state we were in so we told very few people what we were doing. My coworkers didn’t even know that I was building the house myself and my kids didn’t tell most of their friends. Domestic violence isolates women and children. Most victims have been pulled away from family and friends and are very much alone in the world.

After we finished the house, people who heard about the project always told me I had to write about it. A top agent with William Morris called me after one of his authors (who I met at a conference) told him the story. He had a tough job selling me on the idea though. I really didn’t want to write about my biggest mistakes and worst fears. They were tough memories to revisit and I’ve never been one to dwell on the past. At that time we were still afraid, too. We weren’t sure what would happen if my ex read the story.

Did you keep a journal while building your home?

No, but I did email progress notes to my mom and dad and an aunt, so those notes were ultimately essential in recalling my timeline.

You have eight fiction titles. How did you transition to narrative nonfiction?

RISE was a memoir from the start. That first agent wasn’t able to sell the early version of RISE and that’s a good thing because it was a surface view of us building the house without the raw details underneath. I spent six years jumping between RISE and fiction before I finally figured out how to tell our story. By that time my emotional distance probably helped a lot. To give myself additional distance when I felt hopelessly stuck, I wrote the entire story as a novel. That gave me a new perspective to wrestle story elements into place. It’s more difficult to see character and plot arcs in your own children and your personal history than it is to artificially create them in fiction. Once I was able to nail down these essential elements in the fiction version, I was able to discover them in our real lives and then able to re-write the story once again as a memoir.

In your publishing career you’ve done independent, micro publishers, and small presses to a book being sold at auction. What does that feel like?

The publishing industry is tough, but I’m a pretty determined person. I had every intention of sticking with it until I had books with a major house. But even so, I never imagined one going to auction. It was so much fun to have the major publishing houses calling me to pitch. Such a role reversal after pitching to agents and editors for years! The auction was also surprisingly scary in a different way than a novel would have been. RISE is deeply personal and it took a while to get used to the idea that a whole lot of people were going to read it.

What is your daily writing routine?

My writing routine for the past twelve years has been about the same, I get up for my day job at 5:30 a.m. I’m still working as a senior computer programmer analyst. I develop software systems primarily for a city police department to manage property room, crime scene, and special investigations division. That means I sacrifice most of my sleeping hours to write at night. About ten years ago I realized I rarely got more than four hours of sleep and I started saying it just wasn’t a sustainable schedule—I still say that! I would prefer to get more sleep, but I’m going to make writing my full-time career one way or another. Did I mention I’m incredibly determined?

In writing there’s always a learning curve. Is there anything you’d do differently?

If there’s one thing I wish I’d done differently in my writing career, it would be to view myself as an entrepreneur much earlier. As soon as I understood I was running a business, I was able to create a strategy instead of just crossing my fingers over a new stack of proposals. Unfortunately, the lack of planning early on leaves me with an incredibly diverse set of books that are nearly impossible to market effectively. Moving forward I’m paying a lot more attention to the business side of what I’m writing.

What conferences do your regularly attend?

I’ve gone to Bouchercon and ThrillerFest almost every year since I discovered them. It’s essential to connect with other writers. Most professions have more direct contact with coworkers, so we have to make a greater effort to find our tribe. No one should go it alone in this business and I honestly believe the only way to succeed is with the support of other writers. An author friend introduced me to my current agent and she’s the one who took RISE to auction. Friends blurbed my books and introduced me to their friends for blurbs. And of course you connect with readers at conferences and improve your social media profile by making appearances. 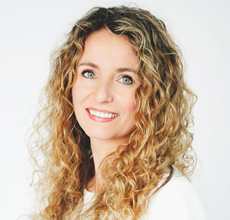 Cara Brookins is the author of the eight published books and has been speaking at events since 2004. Her works include the adult suspense novel Little Boy Blu, the YA Timeshifters trilogy, Treasure Quest, and the middle grade Gadget Geeks and Doris Free novels. Her memoir Rise, How a House Built a Family is based on a series of traumatic events that led her and her four children to build a 3500 square-foot home from the ground up with their own hands. Rise sold at auction to St. Martin’s Press and will be available in January of 2017.