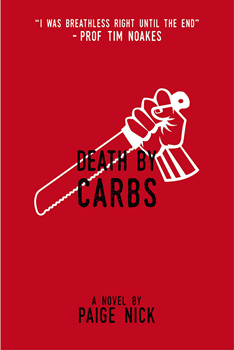 DEATH BY CARBS revolves around dieting and how it affects people for good or ill. The dedication is “to anyone who has ever struggled to lose weight, and knows how murderous it can be.” What attracted you to this as a theme for a murder mystery?

I’ve been trying to lose weight for as long as I can remember. Haven’t we all? But that wasn’t what attracted me to this subject. I became fascinated by the idea of all these people that have it in for Prof Noakes. The more I thought about it, the longer the list grew, and the funnier I found it. So that was the itch I had to scratch. I needed to find out who wanted him dead enough to actually go out there and do it?

Professor Tim Noakes, who popularized the Banting diet in South Africa, is a big celebrity here just as he is in your book. In fact I read a newspaper headline about him while I was reading DEATH BY CARBS. On the first page of the book, we are introduced to Detective September who is investigating Noakes’ murder and cheating on the Noakes diet with donuts. Yet Professor Noakes not only went along with a humorous book around his diet and his death, but he even blurbed it: ‘I was breathless right until the end’. How did you get him on board?

For some crazy reason, I only decided to ask The Prof for permission once the book was written. So I had a lot riding on his response. But he’s a real gentleman and really understands marketing. When I first got in touch to explain that I had written a book about him and wanted his permission, he said he would never get in the way and I should go ahead. I told him he dies on the first page, so he may want to read it before he gave me permission. At that he said I’d better come in and meet him. 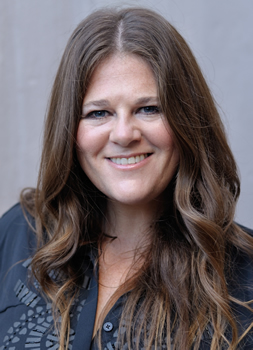 When he read the book he really enjoyed it and only asked me to change two things in the manuscript. The first was that he noticed that I got his height and weight wrong in the autopsy in the novel, and he needed me to get his BMI right, so that his detractors couldn’t have a go at him about being overweight. The second was that the book was originally called Who Killed Tim Noakes?, and he asked me to change the title. It was a sensitive time, and his wife was concerned that some lunatic out there might see the title as a suggestion. The Prof was a great sport from page one to page one hundred and fifty one. And he even joined me at the launch.

Rather than a who dunnit, the book is a who didn’t dunnit. The ex-editor fired because he turned down Noakes’ first book, the diet co-authors who want the limelight for themselves, the dieter manipulating Banting Facebook fans, the snack food executive—all of them have motive, opportunity, and believe they did do it. How did you hit on such an interesting twist?

DEATH BY CARBS is a satire that takes on dieting, fads, and Facebook all in one go. The Banting For Life Facebook Page is hilarious as people stalk each other with multiple persona and motives as they mourn for their dead saint. I think many Facebook groups could generate this fervor. Is yours based on a real page?

When I hit on this idea and started researching it, I discovered more Banting pages on Facebook than you can shake a bread stick at. Some with hundreds of thousands of ardent followers. The members are all so passionate about their cause, it was a goldmine of funny stories, anecdotes and great recipes. In real life, those pages are incredibly useful, resourceful, and I tell you what, they’re great entertainment too.

The book has no heroes, but rather people dealing with jealousy, greed, relationships, and so on—in other words, ordinary people doing what ordinary people do. Do you prefer writing these sorts of characters, or is it just the way this book worked out?

I’ve never written a book like this before, so every step was an adventure. The characters became very real very fast and they took over, chatting in my head constantly, arguing, accusing each other, it was very entertaining to live with them, and all I really had to do was write down everything they were arguing about. I think they were so easy to write because they’re based on all those real people out there that I was reading about in the news and on those Facebook pages, quibbling, debating, supporting, and, of course, hating on the Banting lifestyle.

My favorite characters are the two men who accidentally obtain the corpse when they hijack the ambulance taking it to the morgue, and drive around with it trying unsuccessfully to decide what to do with it. The reader is delighted that they escape, and they, at least, never wanted to kill Noakes or struggle with his diet. Do you think that it’s only in South Africa that you could successfully convert such a serious crime into such a humorous situation? 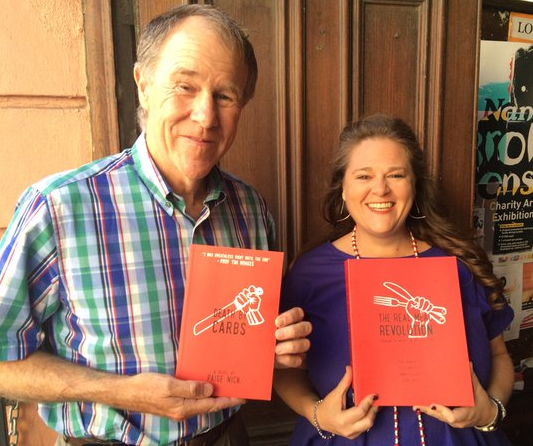 Ninety percent of the readers I encounter tell me that Thabo and Papsak are without a doubt their favorite characters in the book. And they were my favorite to write, too. The funny thing is that they weren’t supposed to be there through the whole book. When I first plotted the book, they were only going to be there at the beginning when they hijack the ambulance with the Prof’s body in it (don’t worry it’s not a spoiler, it happens in the second chapter) and then they were going to reappear at the end. But they were such wonderful characters and they kept getting into so much trouble in my head that I had to include them throughout. They are so uniquely South African, that they perfectly suited this book, with its load-shedding, and Banting wars.

I think there are gormless, hopelessly bad criminals all over the world, but these two are in a league of their own. And the wonderful thing about South Africans, I think, is our ability to laugh at ourselves. And thank goodness for that, considering the state we’re in. It’s either that or cry, and laughing is way more fun (and gives you abs).

What other projects do you have in the pipeline?

I’m busy with a new novel in a very similar vein to DEATH BY CARBS, but political satire. I’m hoping to have it finished by the end of December, and published early next year. But I need to move on it fast, because our political situation is like wildfire right now.

That’s for sure! In the meanwhile, pass another donut, and best wishes to all for the holiday season!