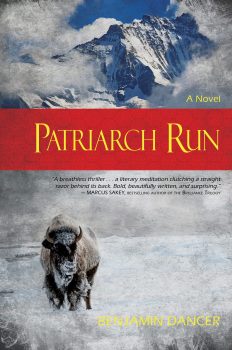 In our connected age, it’s usually easy to reach an author for an interview, unless that author happens to be leading a group of teens on a backpacking trip in the wilderness. When Benjamin Dancer returned to the things we take for granted—such as electricity, running water, and the internet—he answered a few questions about his new thriller, PATRIARCH RUN. Dancer’s book just happens to envision what could occur in a world where we might all be on a kind of extended backpacking trip if civilization’s infrastructure falters.

That’s a great question. PATRIARCH RUN won high praise from Lt. Col. Dave Grossman, the author of On Killing, for getting the psychology of combat right. The story also won praise from national security experts for its realistic depiction of an underreported, existential threat to America. That threat is what stands out most to me.

One of the things I learned in writing this story is that our civilization has unwittingly evolved to become absolutely dependent on a vulnerable critical infrastructure. What I mean by that is that if the power grid were to go down today and not come back up again most of us would die.

To contextualize a statement as bold as that it might be helpful to go back a hundred years to when there were only 76 million Americans. At that time, you didn’t need electricity to meet the basic needs of the population. Food was grown outside the urban centers, and just about everybody ate locally.

Fast forward to today. There are 325 million Americans and that number is growing. Many of our urban centers have outstripped the carrying capacities of their surrounding landscapes. As a consequence, food and basic goods are shipped over long supply lines, all of which are powered by refined fuels which, of course, are manufactured with electricity.

So how is it we’ve managed to expand, in the last 100 years, the carrying capacity of the planet from about 2 billion to about 7.5 billion people? Ironically, the answer is electricity. The advent of reliable, widely-available electrical power has made possible several key technologies that have allowed us to expand Earth’s carrying capacity. Those technologies include fertilizers, pesticides, mechanical irrigation, refined fuels for farm machinery and transportation, infrastructures for clean drinking water, infrastructures for sanitation, advanced medical care, etc. Everything in that list is made available through electrical power.

So imagine a large urban center devoid of electricity. No food. No safe drinking water. No sanitation. No transportation. What we’re talking about is an apocalypse.

What’s really scary is that there are several mechanisms of destruction that have a realistic potential of bringing about that apocalypse, including a sophisticated cyber-attack, which is what the bad guy is up to in PATRIARCH RUN.

Apocalyptic themes seem to have a continuing popularity. Why do you think we are so fascinated with the idea of how humanity might carry on?

I think most people understand at a very deep level that we could easily bring about our own demise. The collective power of 7.5 billion people trying to make a living and creating security for themselves is profound. The amount of resources required to sustain so many people is almost unfathomable. So we have made ourselves vulnerable. You could look at the vulnerability through the lens of sustainability, with issues like climate change. Or you could look at that vulnerability through the lens of national security, with issues like the threat to the grid or a nuclear holocaust. National security and sustainability are two sides of the same coin. We have unwittingly made our civilization quite vulnerable. People sense that. So perhaps they are attracted to themes that play out the apocalypse.

By the way, I do think it would be easy to avoid such an ill fate. If we pay close attention and are intentional about our collective behavior as a people, we could enjoy a long prosperity.

You said that you set out to write a story about fathers. Why is that important to you?

I wanted to tell a story about two types of fathers, one who sacrifices his family for his mission and another who sacrifices himself for his son. I think that’s the spectrum on which all of us, as parents, have to decide who it is we want to be.

In addition to writing, you work as a school advisor. Are there any sly ways that you encourage teens to expand their horizons through books?

I’m always looking for ways to get kids to read. They all love learning, even if they don’t all know it yet. I’ve taught The Hunger Games in a bow making class, where we crafted our own bows and arrows. I’ve also taught classes based on food and cooking with Michael Pollan’s books. I also use a good thriller to get kids engaged.

I plot the entire outline before I begin. I want to be able to visualize the whole world and all the characters before I write the first chapter.

I write alone in my office and in silence. I wake up at 4 am, when the house is quiet, and write until 7. Those three hours feel like three minutes every morning. Then I get the kids ready for school, and we all head off together. All three of them attend the school at which I work. We serve preschool through 12th grade at my school. 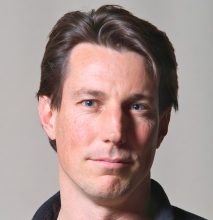 Benjamin is the author of the literary thriller Patriarch Run, the first book in a series that will include Fidelity and The Story of the Boy. He also writes about parenting, education, sustainability and national security.

Benjamin works as an Advisor at a Colorado high school where he has made a career out of mentoring young people as they come of age. His work with adolescents has informed his stories, which are typically themed around fatherhood and coming-of-age.

To learn more about Benjamin, please visit his website.