A Writer Who Defies Expectations 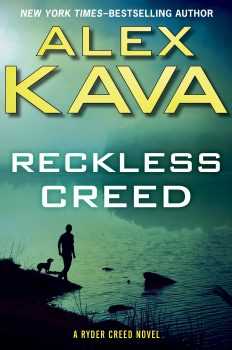 Alex Kava’s literary career is a beautiful paradox. In addition to great writing, a series of accidents, surprises, and unintended consequences have helped bring us some of the most beloved mystery thrillers being written today. On the eve of the release of her latest novel, RECKLESS CREED, Kava spoke to The Big Thrill about her surprising journey.

To begin with, Kava didn’t set out to write thrillers. In fact, genre was not a consideration at all.

“When I wrote my first novel, A Perfect Evil, I wanted to capture the raw emotions of a small-town community held hostage by a killer,” she says. “My killer was loosely based on serial killer John Joubert. I worked for a newspaper during Joubert’s killing spree in the fall of 1983. He kidnapped and murdered two Nebraska boys before his capture.”

Surprise number two: Although she worked on the paper, she was not a journalist but a paste-up artist and part-time copy editor. Still, being in the building, she learned more about the case than the general public. So when she decided to write a novel, she was able to use bits and pieces from the Joubert case.  By then she had already committed to writing after 15 years in marketing and advertising.

“I quit my job as director of public relations for a small college. I’d always wanted to write novels. I even had one in my bottom desk drawer that had received 116 rejections from literary agents.”

That novel remains unpublished, but she moved full steam ahead into the next, doing whatever she had to, to give herself time to write.

“I taught part-time, delivered the Omaha World Herald on the weekends, and ran up my credit cards to help pay the mortgage and living expenses while I wrote A Perfect Evil.”

With so much marketing experience, you might think she sold that novel easily. Well, not exactly, but she was sharp enough to see the lesson in her 116 rejections.

“There were too many comments in the margins that said stuff like, ‘This is too harsh to be a romance,’ or, ‘The suspense is good but you need to tone down the violence,’ or ‘Add some romance,’ ” Kava says. “I suspected that the literary agents expected a romantic suspense novel from Sharon Kava, which is my real name.”

Hence, Alex Kava: a name that could be male or female. Thirty-two queries yielded three agents who wanted to read the manuscript, and all three offered to represent “Mr. Kava.” That was okay, because Kava wanted her book read without any assumptions that might be connected with a female author.

In her own words, “I don’t want to be seen – or judged – any differently than my male counterparts.”

And it seems A Perfect Evil succeeded on that basis. No one misjudged it as a failed romance. In fact, one reviewer called Kava “the newest serial killer” author.

“Reviewers, bookstores, librarians, and then my publisher labeled my books ‘crime fiction,’ ‘psychological suspense, and/or ‘thriller.’ ” At the time, I was simply interested in writing a good story with a lot of twists.”

Aside from the irony of writing a great thriller without knowing it, Kava also didn’t intend to write a series when she created Maggie O’Dell. In fact she says she didn’t even read series novels back then.

“For my second novel, I actually handed in a synopsis for an entirely different standalone,” Kava says. I had already written about a third of it when my publisher said they needed a sequel to A Perfect Evil. I literally had no idea how to do that. But I had given Maggie a suicidal, alcoholic mother and put her in the beginning of a divorce. All of that created wonderful conflict for a standalone novel but I never realized I’d have to deal with it again. Looking back, I think that’s what kept Maggie’s character fresh and unpredictable. I threw her into situations to find out what she was capable of doing. And in a way, I was getting to know her right alongside my readers.”

Along her chaotic and almost accidental path to bestseller status, Kava evolved her own unique approach to writing FBI stories. For one thing, she uses several point of view characters.

“Characters who people Maggie’s world oftentimes return and have their own voices,” Kava says. “For example, Maggie’s partner, R.J. Tully, and her best friend, Dr. Gwen Patterson, have both played integral roles in the novels, more than most secondary characters. And those characters’ lives continue to grow and change along with Maggie’s throughout the series.”

It is also telling that in Kava’s books, the villains don’t just kill women and children. FBI profiler Maggie O’Dell doesn’t profile only serial killers, and those killers don’t restrict themselves to young female victims.

“I challenged myself to come up with other scenarios for Maggie to profile,” Kava says. “I try to choose male and female victims along with different weapons and very different motives.”

Indeed, Maggie O’Dell novels have featured priests as victims (A Necessary Evil,) a terrorist bombing at the Mall of America (Black Friday,) a killer using the Ebola virus (Exposed,) the underground cadaver market as a motive (Damaged,) a serial arsonist greedy for fame (Fireproof,) and a highway killer choosing prey at rest stops (Stranded.)

Kava makes her home in Florida and in Nebraska, but she’s not sure either local has influenced her writing, beyond giving her diverse settings for her novels. After 16 years in print she still loves the process of creating a good story. And what’s the best part?

“I love the brainstorming and coming up with the twists, but I think my favorite part is the research. With each book, I get to choose what I want to learn about next.”

Kava’s success may be in part the result of wonderful accidents and surprises, but she doesn’t advise other writers to follow that lead.

“We all want so much to be published or to stay published that we forget we might need a business plan,” Kava says. “Not just goals, but an actual plan. If not, we place our careers in other people’s hands – our publisher, our editor, our agent. No one is going to care more about your career than you alone.”

In RECKLESS CREED, the third novel in this series, K-9 handler Ryder Creed and his dogs, along with FBI special agent Maggie O’Dell, track a killer willing to use a deadly virus to achieve his ends. A dangerous strain of the bird flu is being released. It’s obvious that it can’t be the work of only one person, which only makes the threat even more frightening. But will they be able to save the day without become infected? That’s the question that will drive you through this suspenseful tale. And since it is Kava’s newest book we turned the focus of the interview on it, and its lead character.

You mentioned that today an author has to have a plan. Is that something that separates Ryder Creed, our newer protagonist, from Maggie O’Dell?

I knew when I created Creed’s character in Stranded that I wanted this guy to have his own series. With Maggie ,I was writing about things I didn’t know–forensics, murder, law enforcement. All stuff I had to research and learn. With Creed it was different. I’ve loved dogs since I was old enough to walk. Dogs were something I knew. Creed is someone I understood immediately, a kindred spirit.

Tell me a little about Creed. Would I like him if I met him at a cocktail party? Is he a hero? Does HE think he’s a hero?

You would definitely notice Ryder Creed at a cocktail party but you probably wouldn’t meet him unless you introduced yourself. He’d be the cool dude in the corner, looking aloof but secretly miserable about being at a cocktail party. Creed really is most comfortable in the company of his dogs.

I don’t think Creed would ever see himself as a hero and in many ways he’s a reluctant hero. But he has a way getting himself mixed up in others’ lives and helping them, rescuing them. He has an incredible sense of doing the right thing despite the risks to himself.

Is RECKLESS CREED a Creed story guest starring Maggie O’Dell or are they equally protagonists here? And why bring them together in your novels?

First of all, the Creed novels are very different than the Maggie novels. Maggie is usually hunting a killer. In the Creed novels the nefarious element is bigger than one killer – it’s a drug cartel (Breaking Creed), secretive research facilities (Silent Creed), or a domestic group of terrorists (Reckless Creed).

Ryder Creed definitely owns the Creed novels. It’s his world that’s interrupted. His family and friends that are the ones targeted. But Maggie O’Dell plays an important role. Because Creed is not law enforcement I knew I’d need someone for the investigative part. It’s a challenge to bring in Maggie each time, but there’s a nice tension, a chemistry, and also a relationship that’s building between the two of them.

Bringing Maggie into the Creed novels is also a way to bring my long-time readers to this series in what I hope they see as an honest and innovative way.

What kind of research did you do to become so knowledgeable about the use of K9s?

I said I love this series because I’m finally writing about something I know and love: dogs. But I had no idea how much I did not know about dogs. They are more amazing than I ever realized.

I devour books and articles about working dogs. The Cadaver Dog Handbook by Andrew Rebmann, Edward David, and Marcella H. Sorg has become my bible. Real experts have long been my favorite resources. I’ve talked to dog handlers and have a couple I can email with questions.

Last summer I went to a K9 Cop Conference in Nashville, which was a great and invaluable experience. I was able to meet and talk with handlers who work with and train scent detection dogs for TSA, the White House, the military, and police or sheriff’s departments along with private companies for personal protection.

Another great resource has been my veterinarian, who is also a personal friend. I like to say she gives me my dog-creds and keeps it real. She’s the one I go to if I want to know what a dog is actually capable of doing or advises me on what risks might be involved to the dogs.

How do you write a dog in such a way that he becomes one of the characters in the story?

They are probably the most challenging characters to write because so much has to be told through their actions and how they interact with Creed or the others. For me, the dogs – especially Grace and Bolo – have become my most endearing characters and definitely my favorite heroes. 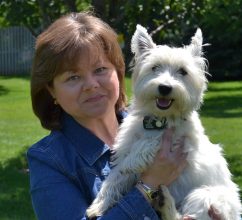 Her stand-alone novel, One False Move, was chosen for the 2006 One Book One Nebraska and her political thriller, Whitewash, was one of January Magazine’s best thrillers of the year.

Published in over thirty countries, Alex’s novels have made the bestseller lists in the UK, Australia, Germany, Japan, Italy and Poland. She is also a co-author of the novellas Slices of Night and Storm Season with Erica Spindler and J.T. Ellison.

October 3 - 9: "What is your favorite online tool?