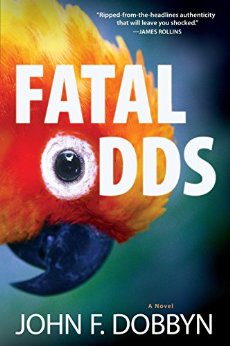 Some legal thrillers trap the reader in a courtroom, but the heroic attorneys in FATAL ODDS face international intrigue when they are dropped into the middle of a three-way gang war.

A jockey involved in a fixed race is charged with murder. Michael Knight and Lex Devlin catch the case, soon finding themselves caught in the crossfire between the Italian mafia and two Puerto Rican crime gangs. The setup offers a wealth of storylines, but the book itself is driven by the characters, starting with the main protagonist, Michael Knight, who was a prosecutor and assistant U.S. attorney in Boston before becoming an associate with a private law firm. All of which makes him uniquely suited to the cauldron of trouble in FATAL ODDS.

“I wanted him to have two ethnic backgrounds,” says author John F. Dobbyn.   “Irish on his father’s side and Puerto Rican on his mother’s side, so that he could blend into either community with fluency, as he has in each of the five novels so far.”

Michael is certainly a hero, but he’s not fearless, he’s not a weapons expert or even a hand-to-hand combat master. He may not see himself as heroic but his clients might disagree.

“His commitment to his criminal defense clients is without limitation or reservation,” Dobbyn says. “His word is absolute and unbreakable. That means that if he has to ride into hell, or walk into a bikers’ bar or the den of a mafia boss, or have a power lunch of the powerful and connected, in the client’s interest, it is not heroic. It is just keeping his commitment. Keeping his word.”

The gangs Michael faces are involved in the smuggling of endangered species. This illicit trade has become the second most profitable criminal activity in the world yet, like most of us, Dobbyn was unaware of this—until he noticed an internet article about it.

“I was overwhelmed by the depth of cruelty in which over ninety percent of the animals captured die in the transporting,” he says. “The suffering of the animals is matched only by the increasing enormity of the profits now funding every other criminal act, from drug dealing to human trafficking, by nearly every major international organized crime gang and terrorist organization in the world. And most amazing of all—I had never heard of any of it.”

Because the scale of animal trafficking is almost unknown there is practically no effort to stop it. Dobbyn hopes FATAL ODDS will shed some light on it. As an attorney himself, Dobbyn has a unique understanding of organized crime activity. His first job out of law school was as law clerk to a federal district court judge in Boston. He was in court every day while the U.S. Attorney’s office used undercover witnesses to topple some of the most frightening and interesting members of the organized crime world.

“As the neutral law clerk, I could talk to them all,” Dobbyn says. “I didn’t know it at the time, but it was an education that gave me a true-to-life background for fiction writing that I wouldn’t trade now for a Ph. D. I heard first-hand how things actually operate on both sides of the law. I met personalities that you couldn’t dream up. I was able to pick up everything from their patterns of speech to the cost of waking up to the real prospect of a violent death.”

The action in this novel takes Michael from the barrio of Jamaica Plain, Massachusetts, to the Amazon rainforest in Brazil. Settings are very important to Dobbyn, starting with the city of Boston, which is like another character in the story. Readers who know and love the city say they enjoy the virtual tours. Once his research takes him beyond Boston, Dobbyn’s wife joins in.

“Lois and I have traveled to nearly every out-of-state and out-of-country city used in a novel, including those in Ireland and England. Getting the locations spot-on is very important, especially for a reader who is familiar with them.”

Surprisingly, Dobbyn says his time in the Air Force may have been as important to his success as his time in courts.  For three years he directed fighter aircraft, where one small error on his part could have cost the lives of the pilot and the radar observer.

According to Dobbyn, “The key to avoiding a disaster was total, thorough ‘pre-preparation’. That, plus a heavy dose of focus and discipline, forged a habit that has been with me in everything I’ve done since—including teaching and fiction writing.”

Now five novels into this series, Dobbyn says the characters will keep growing and evolving as it continues. While you may be anticipating the future, you will first want to see how they survive and bring the bad guys to justice in FATAL ODDS. 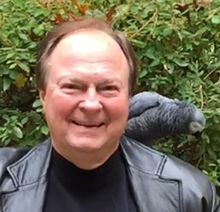 Following graduation from Harvard College and service in the United States Air Force, the author obtained a Juris Doctorate degree from Boston College Law School, and a Master of Laws degree from Harvard Law School. While teaching law as a professor at Villanova Law School, the author published 25 short stories in Ellery Queen’s Mystery magazine and Alfred Hitchcock’s Mystery Magazine. Four novels in the Michael Knight/Lex Devlin series have been published by Oceanview Publications – Neon Dragon, Frame Up, Black Diamond, and Deadly Diamonds, with the fifth, Fatal Odds, to be published on August 2, 2016.