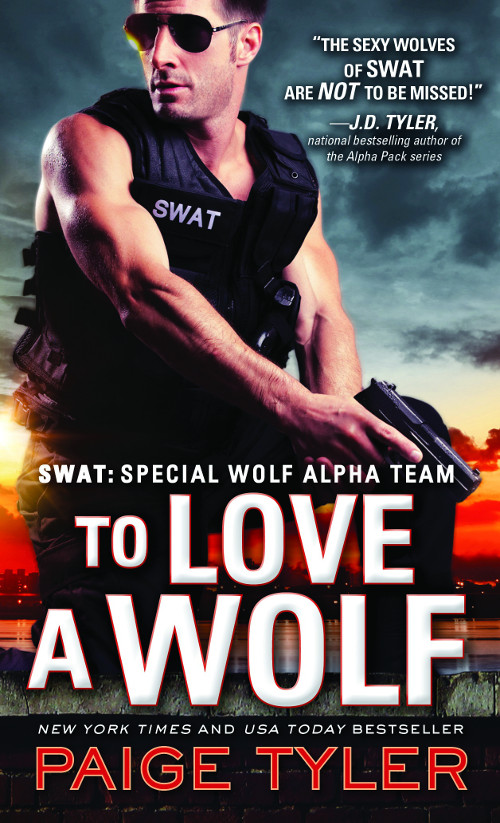 Beware the growl in the back of your throat…you could be a werewolf.

TO LOVE A WOLF brings to life the hidden world of a S.W.A.T. squad of werewolves as they combat the criminals of Dallas, Texas.

This fourth installment in Paige Tyler’s popular romantic suspense series, follows Landry Cooper, an explosives expert with a personal history, as he meets and romances an artistic soul, Everly, in a battle for truth and happiness.

Full of action, intrigue, and romance, readers who loved Hungry Like a Wolf, Wolf Trouble, and In The Company of Wolves, will be pleased to see how the S.W.A.T. squad has grown from untamed beasts to love-seeking soul-mates.

“Each one of them is simply a man looking for a woman who will accept them for what they are—a werewolf,” says Tyler. “They all realize it’s a tough sell, especially since the folktales say there’s only one woman in the world for each of them. We’re not talking about a one in a million woman here. For them it’s more like one in a billion. And if that isn’t enough for the pack to deal with, werewolves in our S.W.A.T. world aren’t turned from a bite or a scratch. Instead, they have a recessive gene that only turns on when they go through some kind of traumatic event. Experiencing those events with the guys helps the reader get closer to them. But at the same time, while they are a serious bunch, we use humor to make the guys more approachable. Some are wittier or snarkier than others, but they all have a funny side that comes out when they’re together.”

As well as delving into the team’s interpersonal relationships, TO LOVE A WOLF has plenty of what romantic suspense readers want—a killer love story—and the author and her co-writing husband, wouldn’t have it any other way.

“I absolutely love Cooper and Everly’s story, from their cute meeting to their super sexy and romantic first date, to the explosive scene where Everly tells Cooper that she loves him and accepts him for what he is—and everything in between. It’s impossible for me to pick a favorite scene,” Tyler says. “Everything about their story is special and near and dear to my heart.”

“Of course, I try to be unique, but we’re all influenced by other stuff we’ve read,” she says. “Brockman is in there, in terms of how I handle multiple points of view and plotlines. Armstrong in everything from the layered paranormal elements to the kick-butt heroines.”

Fans of the previous installments will also be pleased to know that Tyler had hoped for a series run all along.

“As soon as my hubby (who is my writing partner) and I started writing the first book in the series, Hungry Like the Wolf, we realized that the other characters literally jumped right off the page,” she says. “Of course, I didn’t run right out and mention that part to my publisher. I was worried I’d scare them off with such a crazy idea! But they know now, and it’s all good.”

And of course, Tyler plans to keep writing books in her other series’ as well.

“We just finished Book 6 in the X-OPS series and are now working furiously on the second book in our SEALs of Coronado series called Strong Silent Steal. It releases in June, but is available for pre-order everywhere now,” she says.

“We’re also working on the next Books for my X-OPS and S.W.A.T. series. To Love a Wolf, Book 4 in S.W.A.T. (Cooper is finally getting his story!) hits bookshelves on June 7th, while Her Rogue Alpha, Book 5 in X-OPS (Jason and Layla’s story) releases September 6th, and Wolf Unleased, Book 6 S.W.A.T. (Alex’s story) releases December 6th. All of them are available for pre-order now. While those books are hitting the streets, we’re already working on the next books in those series, as well as some other indie stuff coming out between now and November.”

Readers might marvel, how does Tyler maintain such a rigorous writing routine? The answer is, of course, through teamwork.

“The basic schedule right now is to alternate writing one book from our X-OPS series, then one book from S.W.A.T. every ninety days,” she says. “In between those we still do a little bit of our indie stuff, so we’re putting out an indie book about every ninety days as well as the New York stuff. We write a 90,000-word book like TO LOVE A WOLF in about seventy days.”

But this rigorous schedule doesn’t come without a cost.

“I’d be lying if I said it wasn’t hectic as all get out, and to get the job done we seriously write seven days a week,” she says. “Here’s the deal though: I wouldn’t be able to keep up this kind of schedule if it weren’t for my hubby. He’s the best writing partner anybody could ask for. We have a good system of working together to get the stories done. He focuses on the rough draft, plotting, action, and touches of urban fantasy, while I handle the character development, dialogue, and romance. We make a good team.”

Paige Tyler is a New York Times and USA Today bestselling Author of sexy, romantic suspense and paranormal romance. She and her very own military hero (also known as her husband) live on the beautiful Florida coast with their adorable fur baby (also known as their dog). Paige graduated with a degree in education, but decided to pursue her passion and write books about hunky alpha males and the kick-butt heroines who fall in love with them.