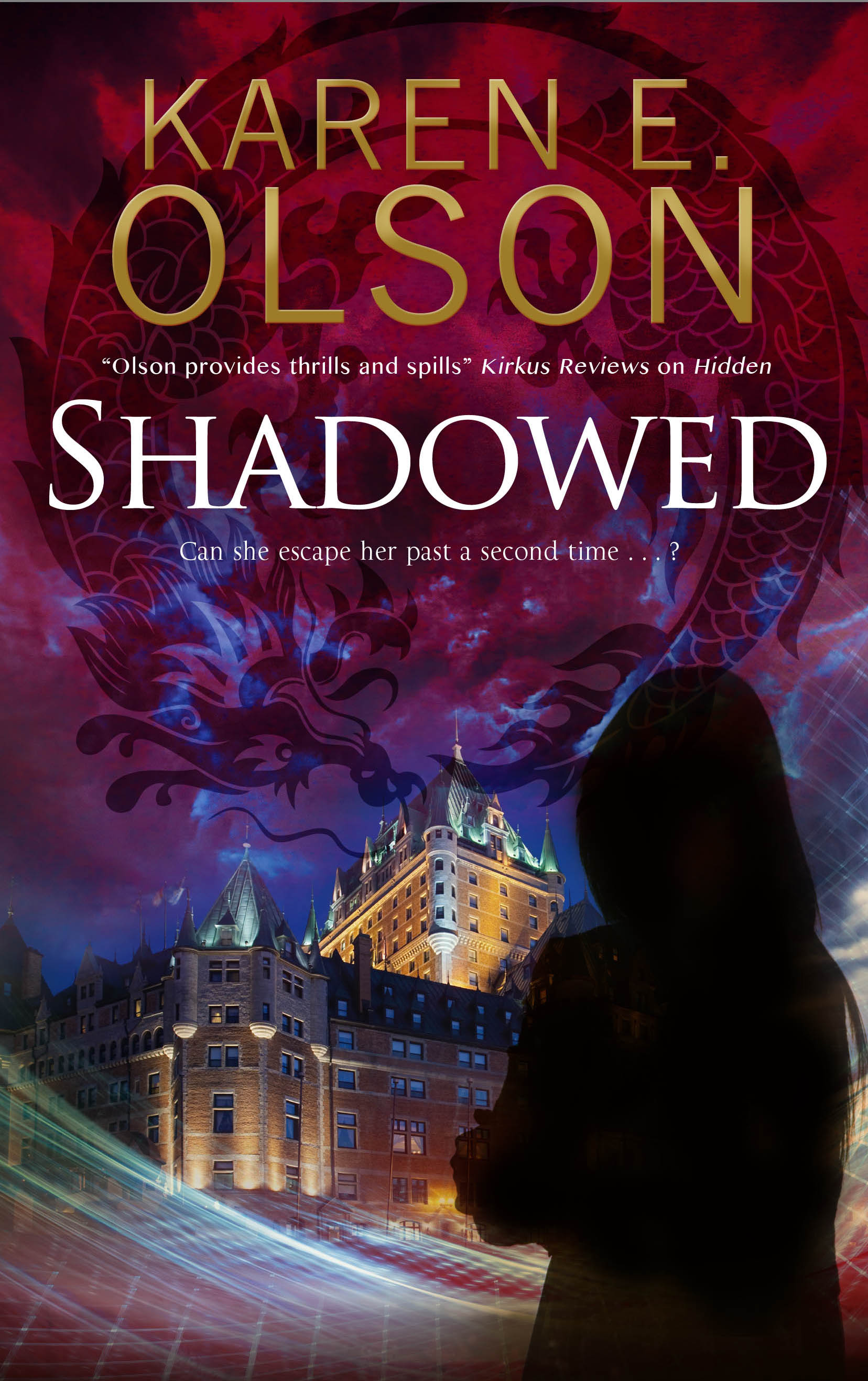 The first line of Karen E. Olson’s new novel SHADOWED is one of those that really grabs your attention: He is looking for me.

Readers will quickly discover Nicole Jones, the hacker heroine of Karen’s previous novel Hidden, is the narrator, and even though she’s living under a new identity on a remote island in Quebec, Canada, she’s discovered “someone is inside her laptop, watching her every move.”

From that chilling beginning, the novel follows Nicole, who’s now living as Susan McQueen, on her flight and quest to determine who’s after her. She’s soon to learn she can’t outrun her past.

In just a glance, it’s clear to see why Kirkus Review had this to say about SHADOWED: “The second in this electrifying series is an addictive page-turner with a stunner of a finale.”

In anticipation of the book’s publication, Karen answered a few questions for The Big Thrill.

Your heroine from Hidden returns, and she actually has a chilling moment that serves as the catalyst for the new book’s action. Can you tell us a little about that moment and about writing it?

I wrote HIDDEN as a standalone originally, but my editor thought Nicole would make a great series character, but I wasn’t exactly sure how I was going to take Nicole forward since I hadn’t planned a series. I had left her in a place where she could have been “lost” forever and no one would have found her (I’ve been to that little island in Quebec, and it’s very beautiful and remote). She needed a very good reason to leave and risk getting caught. I had been doing some research into remote access Trojans, which hackers can use to get into anyone’s computer through a variety of ways, the most common of which is a link embedded in an email. It’s easy to buy one of these online and they’re cheap, only about $40 or so. I began to wonder what would happen if the hacker got hacked and how it would make her feel and what she would do about it.

Can readers get a taste of that online? Is there an excerpt available?

The first chapter is posted on my website for anyone to read.

When readers met Nicole Jones, she was living completely off the grid, by necessity. That’s almost impossible to achieve these days. What appealed to you about that set up?

I do know of some people who do not have an Internet footprint, which is surprising in this day and age, but they do exist. Some people work under the table and use cash in lieu of credit cards. Not everyone has a smart phone or even a cell phone. While I think it’s difficult, the idea of the simple life, one that isn’t bogged down with debt and constant contact with everyone else in the world, is very appealing to me. Nicole needed to get away from it all, literally, so she wouldn’t get caught. Without any footprint, Internet or otherwise, she’s able to do that. And she’s not Nicole in the new book, but Susan. Another way she hides her identity.

You’ve written series before and no doubt became fond of your characters like Annie Seymour. How is it now settling into the mind and world of a new recurring heroine?

Nicole (or Susan or Tina, which is her real name) is a very different character than either journalist Annie Seymour or Brett Kavanaugh in my tattoo shop mysteries. Both Annie and Brett have great senses of humor, which wend their way through the books, but Nicole is much more serious, for obvious reasons. She’s far more complex, and I’m discovering new things about her with each page. I knew Annie, because she’s a journalist and that was my world for so long, and Brett is younger and uncomplicated. Nicole is constantly battling her demons and trying to do the right thing. She thinks she changed during her time on Block Island, but she’s discovered that people don’t really change and she struggles with that. That’s one of the things that I love about writing her. She always seems surprised at her own self discovery.

Based on the opening, we know Nicole is on the run again in SHADOWED. How do you go about setting the tone and urgency of a story like that? How is it different from writing a mystery?

It’s not easy. I go back and forth and move sections around a lot, to make it flow better. Writing suspense is harder for me than writing a mystery, where I’m just solving a crime and need to know whodunit. In suspense, maybe we know whodunit, but there has to be a constant sense of foreboding, offering up an edge-of-your-seat experience: will she get away, who’s after her, what’s going to happen next? The story needs to flow and keep that edge at the same time. The one thing I’ve always done, though, is make sure that each chapter moves the story forward. That’s the same.

What ongoing research are the Nicole books requiring? How do you go about research? Do you have consultants on various aspects of the books?

There is a lot of research and I think I’m probably on a lot of government lists because of the websites I visit. I haven’t really consulted anyone, but I’ve read books about Anonymous and by Kevin Mitnick, who is a former hacker. I’ve watched a lot of documentaries about hacking and the deep web, and I spend a lot of time reading WIRED online. The one thing I haven’t done is download TOR, or The Onion Router, which is how I could get into the deep web. I’m not sure I really want to go there and I’m not sure it’s necessary. I spend about half my time online, looking up things like bitcoins and the Silk Road, and half my time writing. I figure if I put something in the book that isn’t necessarily possible with technology right now, it very well might be at some point in the future.

Do you have a favorite reader response about Nicole or any of your characters?

While I’m not sure it’s a “favorite” response, I’ve had a few people tell me that they really want Steve to come back in future books. Steve is Nicole’s best friend in Hidden, a former geologist who wants to help her in any way he can. He makes a small cameo in SHADOWED, but I’m not sure if he’ll ever really be back in her life. But you never know.

Some authors have kind of a fixed arc for a character? Do you have a vision for how many books you’ll write about Nicole or do you see her adventures stretching ahead for a while?

Nicole’s adventures could continue indefinitely. I did envision a three book story arc, and I’m working on the third now, but the more I write, the more I know that Nicole’s story won’t end there and there will be many possibilities for more. Computer hacking is always in the news, and every day I see a story that might serve as a future plot.

Are there any secrets about Nicole that you haven’t revealed yet? Can you give readers a hint about what’s in store in the next book?

There are always going to be secrets surrounding Nicole. It’s hard to talk about the next book, Betrayed, because it all hinges on the end of SHADOWED, which so far no one seems to have spoiled. Let’s just say there’s a bit of a surprise ending that even I didn’t see coming until I wrote it. But I can say that her old nemesis Tony DeMarco is back, and someone she’s trusted may not be trustworthy.

The excerpt is mentioned above, but where’s the best place for readers to find you online and keep up with what’s coming next?

The best way to keep up with me is through my website, www.kareneolson.com. I’ve got links to my social media there (I’m on Facebook, Twitter, Goodreads, and Instagram) and I also send out the occasional newsletter. Anyone visiting my site can sign up for it there. 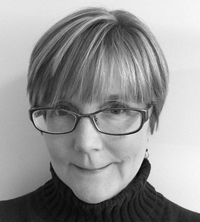 Karen E. Olson won the Sara Ann Freed Memorial Award for Best Debut Mystery and is a Shamus Award finalist. She has written the Annie Seymour and Tattoo Shop mysteries and now the HIDDEN suspense series. She lives in Connecticut.