A Search For Light in Dark Places 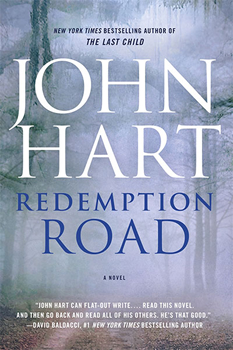 The wait is over for John Hart fans. Five years after his last book, Hart–the best-selling thriller author whose writing about the South has been compared to John Grisham and Pat Conroy–is back with the eagerly anticipated REDEMPTION ROAD.

So why the long gap between books? Hart says it took him that much time–including a year spent on a failed novel that he discarded after 300 pages–to find the character he really wanted to write.

“I began that fifth, failed novel without understanding what my hero wanted and valued, and how far he would go to achieve those things,” Hart told us. “It was, in retrospect, an exercise in hubris. After four bestsellers I was overconfident. If I just write, I told myself, then all elements for the book would, in time, resolve. That’s the lesson it took a year to learn: that without the right protagonist I had no foundation for the story.

“When I started fresh, I knew exactly who the main character was supposed to be: Elizabeth Black, who was a small character in that first failed attempt, but one I found endlessly fascinating, not just dark and wounded, but complex and strong and willing to sacrifice. Once I had that fundamental foundation–a character I understood completely–then the book came as the previous four had. The lesson is that we have to do the legwork first, not an outline in my case, but a relationship with the protagonist that is damn near personal.”

Like his previous works, REDEMPTION ROAD is set in the South (Hart’s native state of North Carolina) and features many of the themes that have won him such praise from fans and critics alike: flawed characters, broken families, troubled children, plus–in this book–a terrifying serial killer.

“If there’s a common thematic element to my books, it’s the search for light in dark places, the discovery through hardship of those qualities that make human beings exceptional, things like selflessness and hope, courage and love and family,” Hart says. “Some think I write dark stories, but that’s an unfair assessment. I put people through hell so they might find a bright, warm spark in all that blackness. That’s what the books are really about.”

One big difference in this book is he uses a female protagonist for the first time as his lead character. Police Detective Elizabeth Black must confront long-buried, horrifying secrets from her own past as well as the pasts of the people around her.  So why did Hart find Elizabeth so fascinating that she went from being a minor character in his discarded manuscript to being the central figure in this one?

“I enjoy wounded protagonists with a streak of selflessness and will and – if the stakes are high enough – a reckless disregard for consequence. Give someone enough of that, and it’s impossible to NOT watch them. They draw the eye, and fascinate. The reader can’t help but ask: why are they like that and what will they do next? I saw that spirit in Elizabeth.”

For Hart, it’s been a phenomenal success story ever since he published his first thriller, The King of Lies, in 2006. That was followed by Down River, The Last Child and then Iron House in 2011. All four became New York Times best-sellers, with over 2 million copies in print. He is also the only author in history to win the Edgar Award for back-to-back novels.

A former criminal defense attorney, Hart was so determined to be a fiction author that he quit the law to write full-time before he had ever sold a book.

“I was three years into practice when I decided to give myself the freedom of writing full-time,” he recalls. “With a stay-at-home wife and a new child, it was a frightening choice, but I knew enough about myself to know I don’t multitask well. I needed to wake and go to sleep calling myself a writer. I decided to escape the safety valve, and put myself in the position where failure was not an option.”

He was also motivated to quit the law–and write fiction fulltime–when faced with the dilemma of having to defend an accused child molester after the birth of his own first child.

“It happened a month or two after my daughter was born,” he says. “The man was guilty, and wanted to know how I would fix it. My disgust is reflected in the opening scene of The King of Lies (which I began immediately thereafter), and I challenge anyone to read the descriptive bits of that passage and doubt my extreme loathing for work as a criminal defense attorney.”

Who are some of the writers that inspired Hart back then to try his own hand at writing thriller novels? He says three authors stand out:

“Patricia Cornwell attended the same, small college ten years ahead of me. Her success was motivating beyond words. If one can do it, I thought, then so can another. John Grisham showed every unhappy attorney just how great the writing life could be, so he has always been at the top of the pile. Finally, there’s Pat Conroy, who taught so many of us the power of language and the effect of courageous writing, especially as it touches upon family or community or deeply held passions. I can still see The Prince of Tides as if I read it yesterday.”

What’s next? Hart is currently at work on a sequel to his highly-acclaimed The Last Child, which will look back at the two troubled young boys in the original book–Johnny and Jack–10 years later. “It’s been great imagining the young men they might have become,” Hart says.

As for his writing regimen these days, Hart said he tries to keep the research for his books to a minimum (“The trick is to get back to work fast, and not get sucked down the rabbit hole”), and does most of his writing in the morning.  “After lunch and nap (yes, always a short nap) I spend a few hours editing whatever word count I managed in the morning. My daily target is a thousand good words. I can sleep with eight hundred. Fifteen hundred makes me ecstatic.” 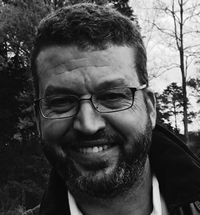 John Hart is the author of the upcoming REDEMPTION ROAD, and of four New York Times bestsellers, THE KING OF LIES, DOWN RIVER, THE LAST CHILD and IRON HOUSE. The only author in history to win the best novel Edgar Award for consecutive novels, John has also won the Barry Award, the Southern Independent Bookseller’s Award for Fiction, the Ian Fleming Steel Dagger Award and the North Carolina Award for Literature. His novels have been translated into thirty languages and can be found in over seventy countries. A former defense attorney and stockbroker, John spends his time in North Carolina and Virginia, where he writes full-time.