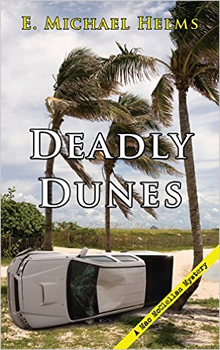 It’s not often that a writer is more heroic in real life than the characters he creates on the page, but E. Michael Helms is exactly that.  A Vietnam combat veteran, it was his harrowing all-too-true adventures that first brought Mr. Helms to the printed page and earned him the critical acclaim and devoted readership that has followed him over the course of his career.

Recently, I had the pleasure and honor of asking Mr. Helms about his heroic past, his tough-as-nails fictional alter ego, and other topics.

Your debut as an author was with 1990’s The Proud Bastards, a memoir of your experience as a Marine in the Vietnam War.  What are your reflections of that publishing experience?

That book was tough to write, and it was only after I sought help for PTSD in the mid to late 1980s that I was able to get it out. It began as journaling, part of the therapy I and other combat vets in our group underwent. I’d done some freelancing for a New York editor who oversaw several gun and ammo magazines, and also Vietnam Combat magazine. My “journal” had begun to take on a book form. I submitted a couple of chapters as standalone articles for the mag. He told me to send him the entire manuscript when I was finished. I didn’t know at the time that he also dabbled as a literary agent. He made a quick deal with Kensington/Zebra, and suddenly I was a published author

DEADLY DUNES is the latest in your Mac McClellan series.  What do you see as the advantages and disadvantages of writing a series?

I really enjoy the familiarity of the reoccurring characters, watching them grow into their roles as well as individuals. Not only the big players such as Mac and Kate, but also those  regulars who give the writer the option to let them take on bigger or lesser responsibilities within any given story. Each has his or her own life outside the limelight of whatever particular case Mac is grappling with at the time.

As for the disadvantages of writing a series, keeping all your ducks (characters and details) in a row, remembering the “who, what, when, and where” of each, can be a challenge. There are readers out there who will remind the author if he stumbles or fumbles with even the smallest character or factual detail. But it’s fun and keeps you on your toes to fact check as you write.

What’s next for Mac?

Maybe his toughest case yet; at least the strangest case he’s taken on. In Deadly Spirits (coming September 2016) Kate convinces Mac to join a local paranormal investigative group. Ever the skeptic, Mac begins to have doubts when a couple of group members fall prey to unseen—and unheard—killers. Will Mac be persuaded there really is something to “the other side?” We’ll have to wait to find out!

How are you and Mac McClellan alike?  Different?

Physically, fairly close. . We both have (had) blondish hair; Mac’s is showing signs of frost; what’s left of mine is gray. Both have blue eyes. Both combat vets, both wounded. We share roots in North Carolina. . And we both live by the Marine Corps creed of Semper Fidelis—loyalty and faithfulness are foremost in how we treat others, and expect to be treated in return.

We differ in that Mac was a career Marine with twenty-four years of duty under his belt, while I did three. I once considered making the Marines a career, but being severely wounded in Vietnam ended that.

Mac follows in a long line of great literary PIs.  What ones were your biggest influences and how did they influence you as a writer?

I’m a big Philip Marlowe fan. I think Raymond Chandler deserves the praise he’s received through the years. Dashiell Hammett is undoubtedly another master of the craft. Topping even Philip Marlowe, in, is Ross Macdonald’s Lew Archer. Archer mesmerized me from the get-to, and continues to. The Lew Archer series, to me, is the best ever written of the genre.

Every writer has their own unique process for getting the work done.  What’s your work day (night?) like?

Each book begins with an idea, whether it’s the classic “what if,” or a line of dialogue that keeps replaying in my mind, or something I heard or read in the news that sparks a tiny flame. The opening scene comes to me first, and for whatever reason, I seem to know how it will end. Then all I have to do is fill in the rest..

I usually plant butt-in-chair around10 a.m. or so. I check my email for writing-related business (correspondence from my agent, editor/publisher, etc.). I try to leave the other stuff in my inbox until later. Alas, I often fail

After breaking away from email, I always go back and re-read the previous day’s work, sometimes farther back. It refreshes my memory and, if I like what I wrote, inspires me to move forward. I also edit my previous session’s writing. I’m not an outliner, although I do jot down notes for ideas about scenes, characters, plot, etc., as they come. I also keep a calendar that I use to follow the storyline day by day. I summarize what happened to whom in what scene or scenes. On a really good day I’ll have five or six manuscript pages, sometimes more, to show for my effort. On a not-so-good day I might have a page or two. I always try to get something down, even if I have to toss most of it the next day. Around 4 or 4:30 I’ve had it. Happy hour beckons before supper.

I wrote a Civil War/Reconstruction novel a few years back, Of Blood and Brothers. While researching the book I visited many of the battlefields to get a “feel” for the actual terrain where the armies faced one another. Near Resaca, Georgia, is an out-of-the-way cemetery where the remains of many Confederate soldiers lie in eternal rest. While there, I couldn’t shake the feeling that I was being watched, and that I was definitely not alone. It was eerie, chilling, and thought-provoking. I’m convinced the ghosts or spirits of those fallen soldiers are still there. 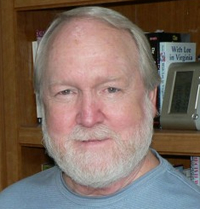 E. Michael Helms grew up along the beautiful beaches of the Florida panhandle, the setting for the Mac McClellan mysteries. His battlefield memoir of Vietnam, THE PROUD BASTARDS, has been called “As powerful and compelling a battlefield memoir as any ever written . . . a modern military classic,” and has been in print for 25 years. Helms is also the author of THE PRIVATE WAR OF CORPORAL HENSON, an autobiographical novel and sequel to his memoir; OF BLOOD AND BROTHERS, a Civil War/Reconstruction saga; and The Mac McClellan Mystery series. He lives with his wife in the Upstate of South Carolina near the Blue Ridge Mountains, where he continues to listen as Mac McClellan dictates his latest mystery.