Why You Should Write What You Love 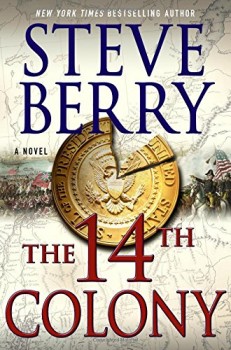 Berry once again mixes fascinating historical facts (the War of 1812, secret U.S. plans to invade Canada, the 20th Amendment for presidential succession and the Cold War) with fast-moving action in THE 14TH COLONY, his highly-anticipated new thriller about a desperate hunt to find hidden nuclear devices in Washington on the eve of the inauguration of a new President.

“We read that the cold war is returning, for some people it never went away,” Berry says about THE 14TH COLONY – the 11th book in his best-selling Cotton Malone series. “It deals with an ex-KGB agent who had a lot of regret and tries to extract a revenge. It deals with Canada, the only country to defeat us on the battlefield. And it deals with the 20th amendment. I wove that all into a ticking clock like a 48-hour adventure.”

Cotton Malone is an ex-Justice Dept. operative who runs a bookstore in Copenhagen and still finds himself plunged into dangerous international crises – but Berry describes his series hero as basically an “ordinary” guy.

“He was born in Copenhagen,” Berry said when asked how he came up with idea for the Cotton Malone character. “I was in Café Norden there and he just came in my brain: he’s going to live here, run a bookstore and stay in trouble. And I went home and wrote The Templar Legacy which was my breakout book.”

“I used my personality for him because I didn’t know more. He talks and acts like me – but I don’t shoot guns or any of those things he does. He makes mistakes, he screws up, and he has faults. He’s not a James Bond character – he’s a guy with ordinary problems, but he can do extraordinary things when called upon. I think that’s what people like: he could be your next door neighbor, but he has these abilities.”

THE 14TH COLONY also sees the return of Cotton’s love interest, the mysterious and fascinating Cassiopeia Vitt – who takes part in many of his daring adventures around the world and has become a huge fan favorite.

“I created her in Templar,” Berry recalled.  “I wasn’t sure if she would stay around, but I really liked her. For me, it would probably be better if Cotton was unattached. But her character has caught on. She’s modeled after my wife Elizabeth, basically Elizabeth’s personality. She’s not going anywhere. She can maybe even have her own book, and one day she might.”

Berry is a New York Times and #1 internationally best-selling author whose thrillers – which include The Patriot Threat, The Lincoln Myth, The King’s Deception and The Jefferson Key – have sold more than 20,000,000 copies in 51 countries. Before starting his writing career, he spent 30 years as a trial lawyer and also held elective office.

So why didn’t Berry decide to write legal thrillers like John Grisham or Scott Turow?

“A writer should never write what you know – that is very bad advice. Instead you write what you love. I was a lawyer and I could write legal thrillers, but I didn’t love that. I loved writing about action, history, secrets and conspiracies.”

Because his fiction is based on so much real life history, Berry spends 18 months doing research for each book. “Six months of preliminary research – that’s pretty intense. Mostly with physical books, 300-400 books per novel…..I don’t read all of the books, but I read large chunks. I research while I’m writing for the last 12 months.”

Two relatively obscure real-life facts – a little known history of U.S. hostilities with Canada (“We went after Canada twice, and we got our tails kicked twice”) and glaring flaws in the presidential succession rules laid out in the 20th amendment – play a key part in THE 14TH COLONY. “I stumbled across the amendment doing research for the Lincoln Myth and put it aside,” he explained.

And, even though he’s writing fiction, he believes it’s important to keep as close to real history as possible. “I try to keep my story 90 percent accurate,” Berry said. “I really strive for 90 per cent. As for the fictional part of the history in any of his thriller plots, he said:  “That 10 per cent is necessary to keep it moving.”

Not that all this writing success came easy for Berry. “My road to publishing was a very long road,” he recalled.  “It took twelve years until I sold. I wrote eight manuscripts, five made it to NY publishing houses and were rejected 85 times. Finally The Amber Room made it on the second time around in 2003.”

Now he tries to help other struggling authors with a series of writers’ workshops he and wife Elizabeth run across the country with the proceeds going to another one of his passions, History Matters – a foundation dedicated to historic preservation. Some 3000 writers have attended with $1M being raised. “I teach you in three hours what it took me 12 years to learn,” he said. “It is a very intense class. Everyone who has taken it has come out of it with their brains fried, but in a good way.”

So what’s next? A new Cotton Malone book, The Lost Order – which deals with a secret about the Smithsonian Institution – will be out in 2017. And he’s already started writing another thriller for 2018 which he describes as “a Cotton Malone novel with a twist.”

He’d also love to see a Cotton Malone movie or TV series. He specifically mentioned Michael Weatherly from NCIS as someone who’d “make a great Cotton Malone,” but adds:

“A lot of people could be Cotton. He’s just an ordinary kind of guy, not a Daniel Craig type of character. George Clooney could play him, that’s the kind of look I had envisioned. It would be cool to see him come to life on screen.”