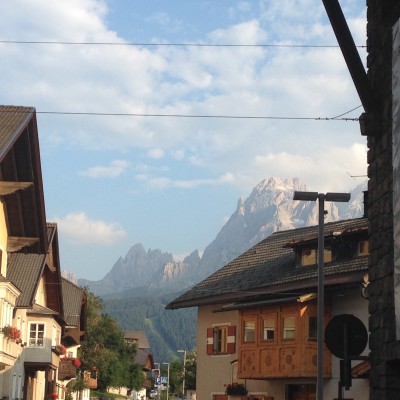 The spectacular Sesto, a destination in Italy

We stood in line for the vaporetto, four of two dozen tourists divided into two queues along the crowded dock. My twelve-year-old twins shifted from foot to foot, impatient to get going. The sun was blazing, the air was thick with the distinct Venetian scents of brackish seawater, warm bodies and aromatic delights wafting from nearby restaurants. We’d slept soundly the night before at a hotel near St. Mark’s Basilica, in a box-size room with impossibly high ceilings—the room had air conditioning, so no one complained—but it was day six of our self-designed seventeen-day European tour, and everyone was cranky from the heat.

Suddenly, one of the ticket booths closed with a resounding thud. Those who had been waiting in that line glanced around, their expressions reflecting first confusion, then anger. The next vaporetto to the parking garages off-island would leave in a few minutes. The remaining ticket seller simply shrugged in response to a British woman’s acidic complaint. Just another day in Venice, his expression said. Take the good with the bad.

And so we said good-bye to Venice on that sweltering Monday, our small rented Ford loaded with children, backpacks and bicycle paraphernalia, and made our way from the garage on Tronchetto northward, toward Sesto, Italy.  As the congested highways gradually climbed, giving way to mountainous roads with tight switchbacks that wound their way around secluded villages and castle ruins, I found I could breathe again.

This wasn’t our first time in Italy, but it was our first foray into the northern reaches of the country. I’d initially discovered the Dolomite Mountains in Donna Leon’s Brunetti novels. Her description of the treacherous mountain pass in A Venetian Reckoning caught my attention, but it wasn’t until later, when my cyclist husband showed me photographs of the region’s other-worldly peaks, that I wondered if this might be the place to set my newest Allison Campbell mystery, Fatal Facade. Allison Campbell, the protagonist of the series, is the Philadelphia Main Line’s premier image consultant. A dissertation shy of a PhD in psychology, Allison relies on her education, deductive reasoning skills and experiences as an outsider to help people reinvent themselves—and to solve crimes. She’d also spent the first three books on the East Coast of the United States. I knew it was time to take her out of her comfort zone, and I loved the idea of sending her to Italy. The Dolomites, with that region’s weave of cultures and forbidding landscape, seemed promising. Further exploration was warranted. 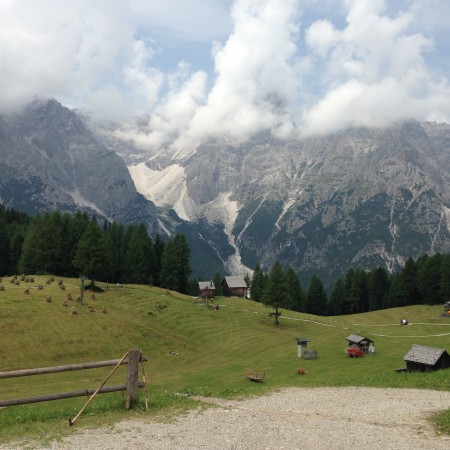 The Dolomiti, designated a UNESCO Heritage Site, are part of the Italian Alps.  Located in northeastern Italy along the Austrian border, the mountains, also known as the “Pale Mountains,” get their light appearance from dolomite, a limestone-like carbonate mineral. The peaks rise jaggedly and dramatically from the valley’s green meadows and dense forests in haunting formation.  I’d been to the Alps in Austria, France, Slovenia and Switzerland, but I had never seen such a varied mountain landscape. After the heat and crowds of Venice, the sheer breadth was a shock to the system. It was easy to understand why Leonardo DaVinci had painted the Dolomites as the backdrop to The Mona Lisa. Stunning.

On that July Monday, we continued north, navigating a series of steep climbs, perilous descents, and hairpin turns, and arrived in Sesto late afternoon. Sesto, or Sexten as it’s also called (many towns in the region have an Italian and a German name), is nestled in the far northeast corner of the Dolomites, in a region called South Tyrol, only a few miles from the Austrian border. Once the setting of battles between Italian and Austrian troops during World War I, the area is now a haven for skiers, cyclists, hikers and mountaineers, and it’s easy to see why.  The famous Parco naturale Tre Cime, home to the beautiful Tre Cime di Lavaredo (Three Peaks of Lavaredo Mountains), is located nearby, and miles of Alpine trails crisscross the peaks and the region. The picturesque valley, with its rolling pastures, meandering rivers and medieval churches, offers a sharp contrast to the hard-edged mountains beyond.  Dolomite customs, like the landscape, are varied, and include elements of Austrian and Italian traditions. In South Tyrol, the Tyrolean impact is clear, but the intermingling of Italian and Germanic influences creates a heterogeneous culture unique to the region.

We’d booked a residence in one of the many family resorts in the area (in nearby Moos) and were immediately greeted by the hotel’s only English-speaking employee, a young woman dressed in traditional Austrian dirndl.  While most residents of South Tyrol are bilingual, speaking both German and Italian, in our experience few spoke English, and we came across no other American tourists during our stay in the region.  In fact, the patrons of the hotel complex seemed to be primarily from Switzerland, France and most frequently Germany. Our hostess directed us to our quarters, a small three-room apartment that could have served as an Ikea display. The twins were smitten by the interlocking bunk beds and the numerous wall cubbies.

It didn’t take long to settle into a rhythm. 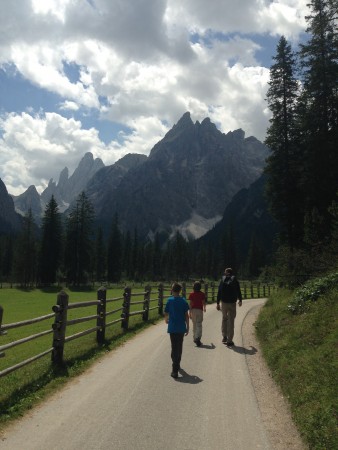 In the mornings we’d explore the numerous Alpine trails in and around the park.  Miles of well-groomed hiking and mountain biking paths made exploring accessible for a wide range of abilities. In fact, it wasn’t unusual to see octogenarians with walking sticks striding next to backpack-clad millennials. While some of the paths meandered between farms and over wildflower-dotted meadows, others led to climbing ridges, small pristine mountain lakes and/or panoramic mountain-top views. An outdoor paradise.

By noon each day we’d be hungry. Lunch would take place in one of the many rifugios, quite literally “mountain refuges,” the huts placed periodically alongside trails. These huts offer shelter and surprisingly good food to hikers—along with an unsurpassed view.  While some can be reached by car, other huts require a manual mode of transportation (or a lift ticket). Regardless of location, we found good service and local specialties like cheese and mushroom dumplings with parmesan and browned butter (the stinging nettle dumplings demanded an adventurous palate but were quite tasty), sausage and sauerkraut, and polenta.

After lunch, we’d hike back to our apartment and spend the afternoons swimming, exploring nearby towns, cycling, or visiting Innsbruck in Austria, only a few hour’s drive away. Evenings began with dinner at a local family restaurant. Although the owners spoke little English, and the only thing worse than our Italian was our German, between Google translate and a great deal of pointing we managed to communicate quite well.  What became clear quickly was that the proprietors enjoyed children, and they treated our twins like favored guests. Each night we were served homemade delicacies such as speck dumplings, steak with herb butter and pan-fried potatoes, local cheeses, ravioli con funghi, venison goulash and our go-to dessert, fried apple rings with cinnamon ice cream.

Nights wound down with a glass of the restaurant’s homemade grappa, after which we’d watch the sun set over the mountains while our twins played tag with their German friends at the hotel, several of whom remain their pen pals (email pals?). The days were long and simple.

I could have continued this routine for the remainder of our trip—the cool temperatures, dazzling landscape and warmth of the people felt intoxicating—but I had a book to research and a fictional body to bury. In two days we would be journeying west, to the French Alpine town of Chamonix, so time was running short. As a newly published author with a fledgling mystery series, I knew it was important to keep readers interested. A change of setting would provide a catalyst for my characters’ growth—not to mention deepen the element of suspense. We’d come to understand why Italians flocked to the Dolomites to escape the heat and crowds of the cities, and but my growing love for the area hadn’t supplied an answer: where exactly would I set Fatal Façade?

It all came together during a hike in Tres Cimes on our final full day. 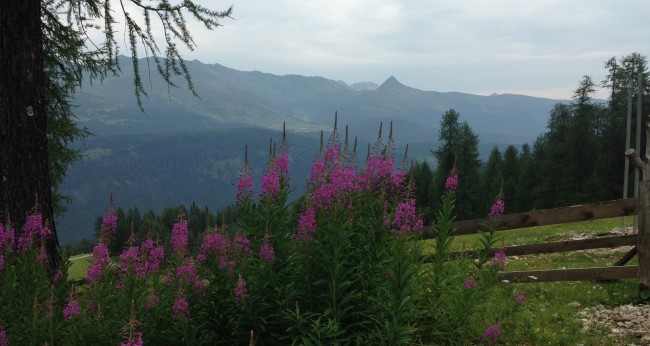 We awakened to an overcast, drizzly morning. A gray haze shrouded the mountains, and a thick fog had settled over the valley. Thunderstorms threatened to mar the later part of the day, but weather.com said the morning offered a window of clearing.  To take advantage of whatever time we’d have outdoors, we took the gondola lift from Bagni di Moso/Bad Moos to the Prati di Croda Rossa/Rotwandwiesen and watched as the valley fell away.

At the top, we followed a series of trails that led past a rifugio, a barn housing reindeer, and a child’s playhouse that had been built at the top of a ski hill. The path we’d chosen looped around a rocky precipice with a view of the expansive valley below and those rugged peaks in the distance. From there, we descended down into the woods.  The path split, rambled, and ultimately led deep into a forest thick with Scots’ pine, mountain ash and the occasional birch tree.  Ferns and undergrowth hugged the forest floor, creating fairytale enclaves and small, rocky knolls. My sons hopped large lichen-covered rocks, marveling at the quiet isolation. It felt like another world.

We eventually emerged into a vast pasture. Cows roamed what would in winter be ski terrain. The sun, now shining, cast a rose-glow over majestic peaks in the distance, but here, the jagged outcroppings were softened by sloping green meadows and fields of purple wildflowers. Near us, an older couple and a younger man cut hay. The men sliced their way through the field with scythes while the older woman, dressed in a black dress and head covering, raked. It was an idyllic scene, and we were reminded that the system of pasture/forest management and farming hadn’t changed a great deal since medieval times.

It was here, I knew, that my victims would meet their demise. The outcroppings and steep cliffs were perfect for an “accident,” and the ruins of castles passed along our travels could be relocated to take advantage of the pastoral environment. In South Tyrol, old met new, cultures mixed, the elderly and the young found respite side-by-side along these mountain trails—only hours from the hustle of Italy’s most crowded cities. Indeed, the region is a study in contradictions.  An American could surely solve a crime on this ancient soil.