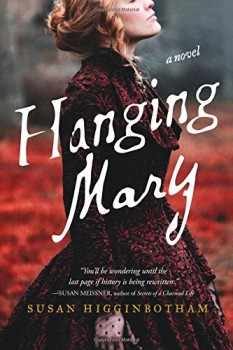 An award-winner for her historical fiction on such Plantagenet-era figures as Margaret of Anjou, Jane Dudley and Eleanor de Clare, Susan Higginbotham, an editor and attorney, turned her attention to the American Civil War for her suspense-driven sixth novel. HANGING MARY tells the story of Mary Surratt, a Southern-sympathizing widow who owned a boarding house in Washington, D.C., that became a meeting place for John Wilkes Booth and his co-conspirators. After Lincoln’s assassination, the question was, how much did Mary Surratt know? It was a question with fatal implications.

How long have you been interested in the story of Mary Surratt and what led to the decision to move your fiction from historical events in England to America?

I’ve been interested in the Lincoln assassination since I was a child, but I really didn’t know about Mary Surratt’s story until the film The Conspirator came out a few years ago. James Swanson’s book Manhunt intensified my interest, as did a couple of biographies of Mary–which reach entirely opposite conclusions about her guilt–and when it came time to propose my next book, Mary Surratt’s story was the one of several options that my editor lit upon. Since I grew up in the Washington, D.C., area, it was a treat to set my story in an area that was familiar to me.

How difficult was it to research the novel and where did you find the most useful documents?

Mary’s story wasn’t at all difficult to research–it was more a matter of sifting through all of the sources, which include trial transcripts, the evidence the government collected, memoirs, letters from Mary before she was widowed, and newspaper accounts. Nora Fitzpatrick, the young boarder who narrates half the novel, was a trickier matter, as I knew very little about her other than the bare genealogical facts when I started to do my research. Unfortunately for Nora, however, she spent the last ten years of her life at St. Elizabeth’s, the mental hospital in Washington, D.C., and I was able to get hold of her file, which includes a lengthy letter from her brother to the superintendent detailing her education and her ill-fated marriage. (Interestingly, he says not a word about Nora’s history as one of Mary Surratt’s boarders!) It, and a couple of comments he made about Nora’s personality, gave me a key to her character.

Did you decide from the beginning to vary the viewpoints and how difficult was that to execute?

Yes, I did. I wanted to balance Mary’s viewpoint with someone who was more neutral and detached, although as my story developed I found Nora growing closer to Mary. I didn’t find it particularly difficult to execute, having done other novels with dual narratives–although I’ll leave the reader to decide whether it was a success! The main challenge was keeping Nora occupied between her documented activities, so I invented a love story for her and allowed her to meet her future husband and stepdaughters.

When did you feel you’d reached a conclusion on the guilt of Mary Surratt in the conspiracy to kill Lincoln, and are there any lingering unanswered questions?

I had a viewpoint when I began writing, and that really didn’t change over the course of the novel. As for the lingering questions–there are many of them! When did Booth change his plan from kidnapping to murder, or did he indeed have murder in mind all along, as some have claimed? Was the Confederate government involved in the scheme? Was Louis Weichmann, a boarder of Mary Surratt who was one of the star witnesses against his landlady, telling the truth at the trial, or did he lie to save his own neck? I’ve heard passionate arguments on both sides.

What was the biggest revelation to you in how this conspiracy unfolded?

What astonished me was how open the conspirators and those in their orbit were. When Mary Surratt went to deliver a message to Lewis Powell at his lodgings, for instance, she had a whole gaggle of people in tow with her to witness her going inside his boardinghouse.  Likewise, when Booth sent a message to John Surratt, he did so via a telegram to Louis Weichmann, which was brought to him by another boarder, Eliza Holohan.

How did you calibrate the suspense when writing about events leading up to one of the most famous assassinations in modern history?

I pretty much just let the events carry the story along. Fortunately, while everyone knows what Booth was up to on the evening of April 14, relatively few know what was going on at Mary Surratt’s boardinghouse a few blocks away, so that helped matters a great deal.

Knowing the tragedy that awaited them, did you ever feel an impulse to steer the characters toward different choices?

I certainly did. Especially Lincoln–whenever I read a book or see a movie about him, I find myself muttering when he and Mary get into the carriage on April 14, “Don’t go to the theater! Don’t go to the damn theater!”

Do you anticipate some people who have strong feelings about John Wilkes Booth will disagree with your depiction?

Possibly, but having written a novel, The Stolen Crown, that departed from the fashionable depiction of Richard III as a romantic hero, I can deal with just about anything in that line.

My next novel will be the story of two half-sisters who find themselves on opposite sides in the Civil War–Mary Lincoln, who needs no introduction, and Emilie Helm, whose husband fought and died for the Confederacy. 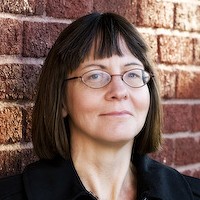 Susan Higginbotham is a prize-winning author who has published historical fiction and biography. When she is not engrossed in a book or sitting by a computer screen, she enjoys traveling, wandering around cemeteries, awaiting on her cats and dogs, and collecting nineteenth-century photographs.