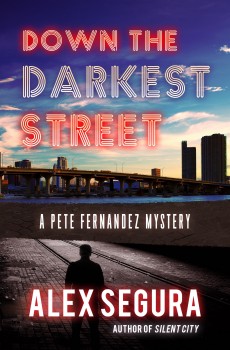 Reporter Pete Fernandez’s life is in ruins when he makes his return in Alex Segura’s DOWN THE DARKEST STREET, the follow-up to his debut, Silent City.

As the book opens, Fernandez’s best friend is dead, his newspaper is career lost, and his ex-girlfriend is staying with him while her own marriage falls apart.

Despite those problems, Fernandez is drawn into an investigation involving a missing girl and is soon put in the path of a vicious and calculating killer who is “cutting a swath of blood across Miami.”

While the prospects are grim at the outset, Segura says his new novel “tells a tale of redemption, survival and the sordid backstreets of Miami — while asking the question that many are too scared to answer: When faced with pure darkness, would you fold or fight?”

Segura, a Miami native and critically acclaimed comic-book script writer, recently answered a few questions for The Big Thrill about DOWN THE DARKEST STREET.

Readers who encountered Pete Fernandez in Silent City got to know his troubles and his struggles. What new dimensions did you discover in writing this second adventure?

We find Pete in a rough spot at the beginning of DOWN THE DARKEST STREET. He hasn’t fully recovered from the evil he faced at the end of Silent City, and it’s starting to wear on him. His life is in shambles, and we accompany him as he tries to, somehow, get it in order. The Pete that readers see here is deeper and more self-aware, while curious and brave.

Tell us a little about the Miami setting. How much does the city shape the storytelling in your work?

The city is an integral part of the story. I don’t know if these books could be set anywhere else. I grew up in Miami, so I’m biased, but I think it’s one of the most compelling and interesting places in the world. It’s bursting with history, culture, people—it’s just a unique place, and so much more than what people get from TV or other interpretations. I wanted to convey the Miami I grew up with: the suburbs, the dark alleys and the working class people that make the city move. Miami also has a long history of crime and corruption, which plays a part in both books.

My goal, always, is to project a sense of place. The P.I. novels that got me excited as a reader featured vibrant and memorable settings—from Marlowe’s L.A. to Tess Monaghan’s Baltimore, to the Boston of Pat Kenzie and Angie Gennaro

Plot is a big part of mystery and thrillers. Do you outline carefully before beginning a story?

I usually start a novel with a rough idea in my head and start writing, to get the muscles moving and a sense for what’s to come. By then, I know where the book is going to end and what the main character arcs will be, but I’m not exactly sure how they’ll get there. A few chapters in, I start leaving myself notes in the manuscript—some are general, some are more immediate, and some are about what’s to come down the line. Sometimes, those notes get organized into a formal outline. Usually, I get mostly done with the outlining and dive back into the writing. I keep it all in one document, too, so I’m really writing through the outline and changing things as I go. It’s a little more organic and certainly less formal, but it works for me.

Who are some of your influences as far as plotting and weaving an intricate tale?

I really value writers who not only tell well-crafted stories that can surprise you with twists that spring from a structured and compelling story, but do it with a style and voice that’s unique and different—authors like Megan Abbott, Laura Lippman, George Pelecanos, and Reed Coleman, to name a few.

On the thriller side, what do you find exciting as a reader? What keeps you turning pages, and how do you try to inject that into your work?

The authors that get me jazzed as an author also motivate me as a reader, because I want to have the same effect on readers with my own work. I’m pulled in by original, compelling characters, and a good setting.

In my own work, I try to make my characters feel real and have genuine reactions. I like to see what happens when “normal” people are thrust into abnormal or unusual situations. I also try to make sure that victories are earned and defeats come with a cost. It’s easy to have your hero get into a bare-knuckle fight and then wake up the next day without a scratch. But that’s not realistic, and it pulls the reader out of the experience. As an author, my responsibility is to bring the reader into a world in which they feel invested and engaged, and then maintain that feeling throughout the story.

Does your comic book work influence your prose work? Certainly some of the goals are the same. You want an engaging plot and you want readers to keep turning pages, right?

Right, you want your story to resonate, no matter the medium. Comics are a collaborative and very visual medium, unlike prose. When writing a novel, I’m holed up in my office typing in isolation. With a comic book, I’m writing a script that will then be interpreted by an artist and analyzed by an editor. There are more cooks in the kitchen. It can be a lot of fun because you get to riff on ideas as opposed to just staring at a wall. On the other end, with prose, you’re in complete control and it’s your vision. Even while editing, you’re changing things based on your vision. If something doesn’t work, it’s on you.

Because comics are so visual, you have to be very mindful of words and being compact. There’s no need to explain something that the reader will see in the art. I think that’s a good lesson in terms of novel writing, too. Keep your words clear, be concise, and don’t get bogged down in descriptions and flowery language. It also helps me to think visually when writing a prose scene – “How would this play out as a movie or on the comic page? What should I describe first?” It makes the work feel more alive and in motion, I think. I owe a lot of that to comics.

Do you see more books about Pete? How much can a series character grow and change?

Dangerous Ends, the third Pete Fernandez novel, hits next year and I’m well into the fourth, so we have some more Pete on the horizon. I’d originally envisioned it as a trilogy, but the fourth book appeared to me as an almost fully-formed idea, so I couldn’t pass it up. After that, we’ll see. As much as I love a long series, it gets harder to maintain credibility with your audience if your hero continues to survive dangerous moments. The protagonist has to change and they have to, hopefully, get smarter and better. So, I’m not sure what the answer is. I do know that I want Pete to evolve from book to book. Each book should push him forward—and push his supporting cast forward, too. 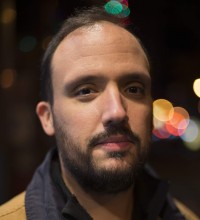 Alex Segura is a novelist and comic book writer. He is the author of the Miami crime novel SILENT CITY, the first in a series featuring Pete Fernandez. SILENT CITY and its sequel, DOWN THE DARKEST STREET, out this year via Polis Books. He has also written a number of comic books, including the best-selling and critically acclaimed ARCHIE MEETS KISS storyline, the “Occupy Riverdale” story and the upcoming ARCHIE MEETS RAMONES. He lives in New York with his wife. He is a Miami native.