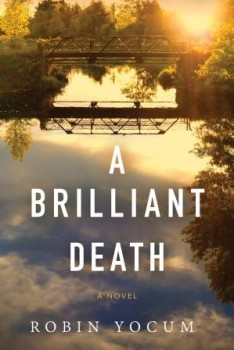 One of the pleasures in doing interviews for The Big Thrill is getting the chance to meet new and interesting people, even if that meeting is over the net rather than face to face. Robin Yocum is my latest interviewee.

Robin, you’ve done quite a few jobs, especially in your formative years. Pumped gas, mopped floors, baled hay, and all the rest. Did any of them help you with your subsequent writing career?

I always had a job when I was a teenager. I don’t know if any of those jobs helped me with my writing career, but they sure motivated me to get an education.  My dad worked at Weirton Steel, in West Virginia, and arranged for me to take a tour when I was a junior in high school. I think he did it to motivate me. If that was his plan, it worked. It was loud and hot and dirty, and I thought it was the most dangerous place in the world to work. I remember seeing a ladle of molten steel being poured and some guy standing a few feet away eating his lunch. I wanted nothing to do with that mill.  If I screwed up at school, Dad would say, “That’s fine. Just keep it up, funny man, and instead of going to college you can come work next to me in the mill.”  That was motivation.

It’s important to note that I’ve used the Ohio River Valley as a backdrop for two novels, and it’s also the setting for a third, which is due out later this year from Seventh Street Books. The industrial Ohio Valley of my youth makes for a rich setting. I use many of the people I knew from the valley as inspiration for my characters.

I am incredibly envious of your having met John Glenn. What was he like?

I interacted with John Glenn several times as a reporter for the Columbus Dispatch. He was a U.S. senator from Ohio during my eleven years at the paper. During every encounter, Glenn was always gracious and humble.

However, my first meeting—and it was very brief—came in the spring of 1971.  I was a freshman in high school and walking down the alley to school when I saw a group of people in Bea Helmick’s back yard. Bea was a widow who lived seven doors down from us. She had a flat-topped garage upon which had been installed an air pollution monitor. Brilliant and Steubenville had been deemed two of the most polluted communities in the United States and the government was getting involved and trying to reduce the pollution.

As I neared, I recognized one of them as Glenn, the famous astronaut who was the first American to orbit the earth. The previous year he had run unsuccessfully for the U.S. Senate.  Still, there was no name bigger in Ohio than John Glenn, and there he was, looking concerned and nodding as one member of the group explained the monitor. We made eye contact and I waved; he winked and raised an index finger—a mini wave.

When I got to school I told my buddies, “I just saw John Glenn.”

Clearly, I hadn’t thought this out. The answer was going to sound ridiculous. “In Bea Helmick’s back yard.”

They laughed. “What is God’s name is John Glenn doing in Bea Helmick’s back yard?”

I’m sure they didn’t believe me, but in my book it counted as an official meeting.

What did it feel like watching your first book leave the nest? Did that change with later books?

I had two nonfiction books published before my first novel, Favorite Sons, was released in 2011. It’s always a kick to open the box from the publisher and see a new book with your name on the front. I hope that never stops being fun. It was definitely different with Favorite Sons. I had been a newspaper reporter for 13 years and I was cognizant of the fact that I was always writing about the accomplishments of others. I wanted to write a novel because it would provide me with an opportunity to start with a blank sheet of paper and create something that was uniquely mine—my ideas, my imagination, my words. For that reason, Favorite Sons will always be special to me, but I was anxious to get back in the game and complete the next book.

Interestingly, I wrote the first draft of A BRILLIANT DEATH several years back. When no one showed any interest in publishing it, I put it on the shelf and started working on other projects. My agent, Colleen Mohyde, read the manuscript a few years ago and urged me to give it a rewrite. She felt I had progressed as a writer and wanted me to take another run at it. I did, and she sold it right out of the block.

A BRILLIANT DEATH is set in your hometown. How much did you have to change, geographically or historically, in writing the story?

More than just set there, the book is named after it.  It’s set in Brilliant, Ohio. To locate Brilliant on a map, find the point where Ohio, Pennsylvania, and West Virginia meet, then come down river about thirty miles.

I visualized every scene from the Brilliant of my youth. I didn’t have to change it dramatically, but I tweaked the geography a bit to suit my needs. For example, early in the book a funeral takes place at the Church of Christ. However, mentally, I situated the church where Our Lady of Fatima Catholic Church used to sit. There also is a scene that takes place at a park north of town, which doesn’t exist. That’s the beauty of fiction. The geography can be whatever I want it to be. Still, anyone from the area who reads the book will recognize the town as Brilliant. It was such a great place to grow up.

Unfortunately, the entire Ohio River Valley has been devastated by the collapse of the steel industry. Between the demise of Weirton Steel and Wheeling-Pittsburgh Steel, the valley lost 60,000 jobs, and that doesn’t include the jobs lost in the industries that supported the mills or the businesses that set up in the area because they wanted access to the steel. Brilliant has a power plant just south of town, so it has held up better than many of the communities up and down the river. Overall, it’s a sad situation.

Are the Kaminskis based on real people?

The Kaminskis are not a real family, but I use my family and the people I knew growing up for inspiration.  When I was growing up in the Ohio River Valley in the late fifties and sixties, it was still a place of first-generation immigrants, primarily from Eastern Europe, two of whom were my great grandfathers. One was a dour German named Ullrich who made his only son drop out of school after the fourth grade to work in the glass factory, and the other, Grandfather Barto, was a gregarious Hungarian who mined coal, made his own wine, and once spent three days unconscious on the living room couch after getting kicked in the head by his mule. My frugal great grandmother was not about to waste money on a hospital bed when he was perfectly fine being unconscious on the couch. Eventually, he awoke and went back to work.

Having heard that story, it doesn’t surprise me that A BRILLIANT DEATH is awash with humor. That can be a dangerous quantity, especially in crime books—what’s your viewpoint?

I think humor works in a crime/suspense novel as long as it comes naturally. In A BRILLIANT DEATH, some of the humor is situational—such as the cemetery scene—and some is the natural banter between good friends. Even in tense situations, such as the scene where Mitch is in the attic, there is room for the funny side. There is a lot of me in my protagonists, which is why I prefer to write in the first person, and I would like to think I have a good sense of humor.

It also struck me that the humor had a distinctly British feel to it in parts. Am I dreaming that?

It’s interesting you think that. Perhaps I am subliminally channelling my inner John Cleese, stemming from many nights of watching Monty Python’s Flying Circus during my college days. 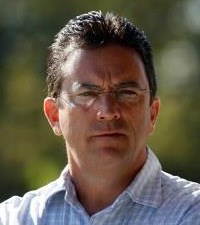 Robin Yocum (Westerville, OH) is the author of the critically acclaimed novels FAVORITE SONS and THE ESSAY. FAVORITE SONS was named the 2011 USA Book News’ Book of the Year for Mystery/Suspense. It was selected for the Choose to Read Ohio program for 2013-14 and was a featured book of the 2012 Ohioana Book Festival. Yocum is also the author of DEAD BEFORE DEADLINE . . . AND OTHER TALES FROM THE POLICE BEAT and INSURED FOR MURDER (with Catherine Candisky). He is the president of Yocum Communications, a public relations and marketing firm in Westerville, Ohio. He is well known for his work as a crime and investigative reporter with the Columbus Dispatch from 1980-1991. He was the recipient of more than thirty local, state, and national journalism awards in categories ranging from investigative reporting to feature writing.

To learn more about Robin, please visit his website.