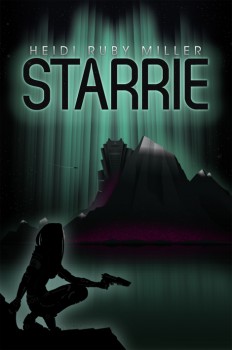 Due to some business travel to Fairbanks Alaska I had the chance to read STARRIE by Heidi Ruby Miller in two sittings on the same day. And let me just say, I’m glad I had that opportunity. STARRIE is one ripping fast book and a well told story. I loved it! It was a perfect diversion as I looked out the airplane window across the billowing clouds and Alaskan mountains

Miller uses research for her stories as an excuse to roam the globe. With degrees in anthropology, geography, foreign languages, and writing, she knew early that penning fast-paced, exotic adventures would be her life. She’s put her experiences and studies to paper in her new, far-future novel. She took a short break from her travels to talk to The Big Thrill about STARRIE.

Please tell us about STARRIE.

Where did the character, Starrie come from? Is she based on a real person? Totally fictional? Or a secret version of yourself?

I doubt I could go through the abuse Naela did and come out of it so strongly. She reminds me a little of Aeryn Sun from Farscape with a dash of Elizabeth Jennings from The Americans, but with a better sense of humor than both.

As I read the story I was impressed by the tightness of the writing. How do you recommend new writers achieve good clean prose?

Like I tell my writing students at Seton Hill, know your intent for each scene—ideally, you will be showing characterization while moving the plot forward. A few words can be more powerful than an entire page, so make them count by eliminating redundancies, unnecessary gestures and facial expressions, and constant internal questioning by the POV character. Chapter outlines or summaries are a surefire way to keep each scene on task for me.

I grew up reading comic books and choose-your-own adventure novels, and watching Star Wars, Battlestar Galactica, and 2001. Science fiction made me feel that there was more out in the universe than just this little world, and it made me feel hopeful about the future, in awe of the cosmos.

This is your third book in the Ambasadora universe, are there more to come?

Book 2: Scarred by Light is almost complete. I have detailed chapter outlines for Book 3: Transformed by Light, and two other standalone novels.

Who are your favorite science fiction authors, or for that matter authors in general?

Even reading Arthur C. Clarke as a teenager, I found comfort in growing older from his stories because he showed that life wasn’t over at seventy or eighty or one hundred, not by a long shot. Madeleine L’Engle expanded my mind before that. During my college years, Douglas Preston and Lincoln Child spoke to the budding archaeologist in me. My new author obsession, thanks to my husband’s suggestion, is Alan Furst. His writing is incredible.

What advice would you give to a new writer, a few chapters into their first draft?

Sketch out the rest of the novel, chapter by chapter, so you don’t end up with mid-book blues and so that every time you sit down to write you know where you’re going and making the most of your session. Also, resist the urge to edit as you go. Make notes about changes, then continue writing the story as though you’ve already made those changes. You can deal with them during a proper rewrite.

And now for the question that leads us to the deep inner soul of Heidi Ruby Miller. You get up in the morning on a lovely summer day and walk to the front door to take a morning walk. When you open the door, instead of your front yard, there is a gaping hole that descends farther than you can see, a narrow spiral staircase leads down into the darkness. The sound of distant voices whispers up out of the abyss. Some do not sound happy. What do you do? 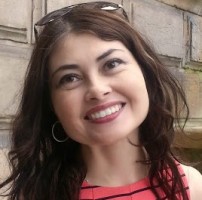 Heidi Ruby Miller uses research for her stories as an excuse to roam the globe. With degrees in Anthropology, Geography, Foreign Languages, and Writing, she knew early that penning fast-paced, exotic adventures would be her life. She’s put her experiences and studies to paper in her far-future AMBASADORA series and into her two new thriller series.

In between trips, Heidi teaches creative writing at Seton Hill University, where she graduated from their renowned Writing Popular Fiction Graduate Program the same month she appeared on Who Wants To Be A Millionaire. AMBASADORA was her thesis novel there, and the multi-award winning writing guide MANY GENRES, ONE CRAFT, which she co-edited with Michael A. Arnzen, is based on the Seton Hill program and was named #5 in The Writer magazine’s Ten Most Terrific Writing Books of 2011.

She has had various fiction and non-fiction publications, as well as various jobs, including contract archaeologist, foreign currency exchanger at Walt Disney World, foreign language teacher, and educational marketing director for Frank Lloyd Wright’s House on Kentuck Knob. In 2012, Heidi created the Dog Star Books science fiction imprint for Raw Dog Screaming Press and was the managing editor for the line for three years. Recently she was the Director of Professional Writing Relations for the Pennsylvania Literary Festival, an event she co-founded in 2014.

Her formal memberships include The Authors Guild, International Thriller Writers, Pennwriters, Littsburgh, and Science Fiction Poetry Association. She is fond of high-heeled shoes, action movies, chocolate, and tea of any sort. Heidi lives near Pittsburgh with her award-winning writer husband, Jason Jack Miller, and a sweet little kitty.

To learn more about Heidi, please visit her website.