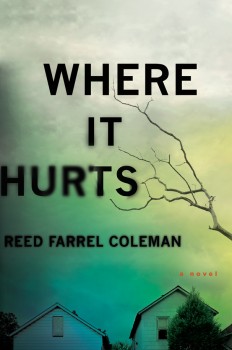 Reed Farrel Coleman is a seasoned veteran when it comes to dishing out quality crime fiction. Stories that not only entertain, but also set up shop in your mind for some time. Coleman’s characters–from the part-time PI Moe Prager to his take on Robert B. Parker’s Jesse Stone to his latest hero, Gus Murphy – are flawed, genuine men who struggle with their demons but still manage to scrape their way toward surviving. They’re broken but true, with relatable problems even in the face of unexpected dangers. Coleman’s poetic and workmanlike style has presented readers with stark realities and the people that populate them for decades.

His latest novel, WHERE IT HURTS, is no exception. When we meet Coleman’s newest protagonist, he’s trying to prop himself up after hitting a deadly bottom, still reeling from a series of unforeseen tragedies. But when an ex-con asks him for help solve a murder, Murphy must power through his own haze of grief to help someone else, and possibly return to the world of the living.

We had the chance to sit down with Coleman to discuss WHERE IT HURTS and what’s next.

Reed, thanks so much for doing this interview. I have to be upfront–the Moe books have been a huge inspiration to me as a writer. I’m sure I’m not alone in this. How tough was it to end the series with The Hollow Girl? I’m assuming you knew going in this was going to be the finale–did that help, or make it harder to say goodbye?

Thanks, Alex. To say my work inspired you is perhaps the greatest compliment a writer can receive. As far as ending the series … yes, I knew the end was at hand around the time I was finishing Hurt Machine, the seventh novel in the series. Moe was getting older and was now recovering from a serious illness. He was getting to a point where the only thing he could flash with any authority was his AARP card. So in conceiving the end of the series, I wanted to do one book that showed fans of the series who Moe was before he was a cop, before he was world weary and tainted—Onion Street—and one to show him completing the circle of his adventure—The Hollow Girl. It made goodbye easier because I could prepare for it to be over and I could end things on my own terms.

Your new novel, WHERE IT HURTS, is the first in a new series featuring ex-cop Gus Murphy. The book is dark and shows us a man who hit his absolute bottom in Gus. What can you tell us about the origins of the book and what people can look forward to when it arrives next month?

The series was one of those perfect storms for a writer. I had the idea for the character, setting, and plot all at once. Gus is a retired Suffolk County cop who one day is sure he understands the world and the next day discovers he knows nothing about it. His world blows apart and now he has to relearn how to live. The setting is Long Island, but not Gatsby’s Long Island. It isn’t the Gold Coast or the Hamptons. It’s the Long Island I live on, the blue collar, middle class Long Island. The Long Island I learned about when I drove a home heating oil truck for seven years. The one where people sometimes have to choose between heat and food in the winter.

The book also feels very noir, in the best possible way. Did you set out to write a darker book, featuring a more down-on-his-luck protagonist? Can you talk a bit about why?

I don’t preset what I’m going to do. That’s one of the reasons I don’t outline. I let the book be what it wants to be. But given the subject matter of the plot and the seriousness of the crimes, it was destined to be a dark book. I do believe, however, there is a strong sense of hope in it as well. In the end, the critics and readers will make up their own minds about that.

What are some of the challenges an author can face when launching a new series? Any specific ones you dealt with in relation to Gus? Anything unique about this experience when comparing it to Moe and your previous multi-book characters?

The challenges are legion. For one, you want to do some of the things you did in your other successful series, but you don’t want to repeat yourself or make your new character a thinly veiled copy of your old protagonist. Setting, tone, etc. are all tough choices because once you’ve mad those choices, you are stuck with them for better or worse. Inevitably there are some similarities between Moe and Gus and some obvious differences. But the biggest difference is in their evolution as men. Moe always had a slightly jaundiced and skeptical view of the world whereas Gus goes from one world view to another in the course of a single day due to a singular event.

As you’ve shown in your past work, location is an important character. Can you talk a bit more about the setting for WHERE IT HURTS?

Peter Spiegelman says, and rightly so, that setting is the soil in which to grow your characters. So in some sense, characters must be of the place. They shouldn’t be interchangeable with different settings. For instance, Moe or Gus would see utterly out of place in Daniel Woodrell’s Ozarks as would Ree Dolly be lost in Coney Island or in Suffolk County. Gus is native to Smithtown in Suffolk and he is of the place. I hope the readers sense that. And I believe most people, even most New Yorkers, have no clue about Long Island. One of my goals is to make people see the Long Island I see and experience it, through Gus, the way I experience it.

You’ve got a few Jesse Stone novels under your belt now, and to say they’ve been well received would be an understatement. Like many of us, you’re a fan of the great Robert B. Parker’s work, so I imagine the gig was a little daunting. Going into it, what were you hoping to add to the mythos? What were some of the challenges?

To be frank, I wasn’t daunted by it. If I was younger or less far along in my own career, I might have been paralyzed by the task. I believe that writing is hard enough without throwing obstacles in your own path. If I focused on the legacy of Bob Parker and the popularity of Jesse Stone, I think I would have made my life and my job much harder. Instead I tried to do what I always try to do, which is to write the best book I can. I knew I wouldn’t try to do a direct imitation of Parker because it would come off as just that, an imitation. So my approach is to leave his characters intact, but to shift the focus to a much tighter lens. I wanted to give the sense of what the characters were thinking and feeling, which wasn’t what Bob Parker focused on in these books. I also wanted to open up Paradise, Mass as a setting.

Jesse’s interesting when compared to Parker’s Spenser, who’s much more together and aware of himself. How would you compare writing Jesse to Moe? How are they alike or different?

Moe was flawed, but very thoughtful and philosophical. He was a man who wore his heart on his sleeve. I like to say that the only thing Jesse Stone wears on his sleeve is his sleeve. They are both dedicated to their work, but they are very different men.

What else inspired WHERE IT HURTS?

I always keep The French Connection in mind when I begin a new series. Why? Because it so perfectly matched character, to setting, to tone, to narrative. That’s always my goal. Sometimes I get closer than others. I think I get pretty close with WHERE IT HURTS.

What’s next after the first Gus book?

The last of my Gulliver Dowd novellas, Love and Fear, will be released in 2016 as well. I just finished the next Gus book, What You Break. It should be released in January of 2017.

Reed Farrel Coleman, author of the New York Times–bestselling Robert B. Parker’s Blind Spot, has been called a “hard-boiled poet” by NPR’s Maureen Corrigan and the “noir poet laureate” in The Huffington Post. He has published twenty-one novels, including nine books in the critically acclaimed Moe Prager series. He is a three-time recipient of the Shamus Award for Best Detective Novel of the Year, a winner of the Barry and Anthony awards, and is a three-time Edgar Award nominee. An adjunct instructor at Hofstra University and an instructor for MWA U, he lives with his family on Long Island.