An Anthology of Thrilling Fiction for Teens 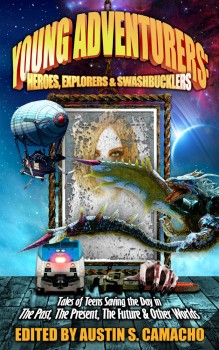 Austin S. Camacho is one of those daring writers who have made the leap into the publishing business. He’s a longtime author of suspense fiction–he’s written five novels about Washington D.C. private eye Hannibal Jones and four in the Stark and O’Brien international adventure-thriller series, as well as the new detective novel Beyond Blue–but he’s also the editorial director of a Maryland-based small press called Intrigue Publishing. Founded three years ago by Camacho and two partners, Intrigue has a growing list of mysteries, thrillers, and Young Adult novels penned by up-and-coming authors. And now Intrigue is publishing a collection of short stories for teenagers, an anthology edited by Camacho and titled Young Adventurers: Heroes, Explorers & Swashbucklers.

Although other presses have published YA anthologies, Young Adventurers offers a uniquely wide sampling of genres, from spy stories to horror to science fiction and fantasy. The collection’s first tale, “Piney Power,” by New York Times bestselling author F. Paul Wilson, describes a supernatural episode from the teenage years of Repairman Jack, Wilson’s popular antihero. “Sidetracked,” by Jeffrey Westhoff, tells the story of a teenage apprentice spy who tracks Russian operatives, and “The Girl Who Slipped Through the Mirror,” by Kevin Singer, is a horror story reminiscent of Stephen King. The anthology’s second half is devoted to science fiction and fantasy tales, including a story about dragon hunting titled “The Wreck of the Blue Plover,” by David Turnbull.

The collection reflects the eclectic tastes of Camacho, who studied psychology at Union College in Schenectady, N.Y., before joining the U.S. Army. He enlisted as a weapons repairman, but soon found a more appropriate calling when the Army trained him to be a broadcast journalist. One of the highlights of his military career came during Operation Desert Storm when Camacho went to Israel to videotape the Patriot missile crews battling the Scud rockets launched from Iraq. Nowadays, he continues to handle media relations for the Defense Department as a civilian. In addition, Camacho is deeply involved with writers’ organizations–he’s a past president of the Maryland Writers Association, a past vice president of the Virginia Writers Club, and an active member of Mystery Writers of America, International Thriller Writers, and Sisters in Crime.

Why did you create this kind of YA anthology?

We wanted to publish a book that would be as appealing to the young male audience as possible. Our research showed that they still want lots of action, with a teen protagonist who can save the day, but otherwise tastes were all over the map. So we thought, “What if we give them all of it?”

Your own novels are aimed at adults and focused on the detective and police procedural genres, and yet you’ve fashioned a YA anthology that has lots of science fiction and fantasy.

I’m a big fan of the way sci-fi and fantasy seem to come out when they’re aimed at kids. Like video games, the themes are universal. Nobody ever says, “I’m a Final Fantasy fan so I won’t play Metal Gear Solid.” As long as the story is about heroes being heroic, who cares if it’s in the jungle, another dimension, or outer space?

Once you selected the theme for Young Adventurers, how did you choose the contributors?

We put out a general call for submissions and flooded the social media channels. Of course, we did ask our own YA authors (both Jeffrey Westhoff and C.A. Verstraite gave us wonderful stories) and I personally asked F. Paul Wilson because I wanted a marquee name to set the bar high for the others. But most of the stories came from LinkedIn writer groups and Facebook. And we ended up with twice as many really good stories than we could use.

What makes Intrigue Publishing different from other small presses and the traditional Big Five publishers?

We seek out great writers who have created great books, and we work our butts off to get them into the hands of readers. Unlike most small presses, we always pay an advance, always pay royalties, and never take a dime from our writers. Unlike the Big Five, we only buy the rights to a property for five years at a time and we are not just searching for blockbusters. If the work is good and the writer is willing to learn and work with us, we put ourselves behind them 100 percent.

How does your experience as a military public affairs specialist influence your second career as a writer and publisher?

As a writer, the most important thing I learned from my public affairs career is that you can’t wait for inspiration. You sit down and write because there’s a deadline. It also taught me to write tight — that small words and short sentences usually tell the story best. As a publisher it taught me that everybody needs an editor and that, just because you like what you’ve written, that doesn’t mean lots of people will want to pay to read it.

Many authors believe that, in some ways, it’s harder to write an outstanding 3,000-word short story than it is to pen a great 100,000-word novel. (I think that’s true; I’ve sold seven novels but only one short story.)

I totally agree! In a really great short story, every word counts, and most of them do more than one job. The short story writer has to make me know those characters very quickly, without a lot of backstory. Pace is vital and you don’t have the luxury of taking time for a long setup. I’m a novelist by nature, and the few short stories I’ve written were torturous to squeeze out.

Young Adult fiction seems to be undergoing an evolutionary explosion, branching into dozens of genres and subgenres. Why do you think YA has become so popular, among both teenagers and adults?

It may be that adult novels have become too adult. I think there’s an adult audience out there that wants to pick up a book and know there’s no graphic sex, no serious violence, and limited bad language. Plus, people like to share experiences with their kids and reading the same books is one of the few options left for that. And sometimes we want to put aside the futuristic philosophy for a good old space opera, or pretend for a while that we believe in magic, elves, or monsters, without a plausible explanation.

What’s next for you? Will Intrigue Publishing come out with more anthologies if this one is successful? And what about your own fiction?

Young Adventurers is indeed an experiment, but if it works we’ll put out a sequel next year, and test the water in other genres we publish (crime fiction, romance, urban drama). As for my own fiction, we just released my next Hannibal Jones novel, The Pyramid Deception–my private detective interviewing a witness when she’s gunned down right in front of him! I also have the next Stark & O’Brien adventure thriller back from the editor for rewrite, and I’m plotting another mystery. The cycle never ends because, as much as I enjoy the editorial process, I just have to write. 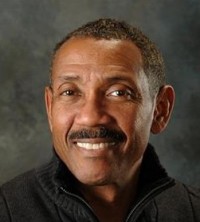 Austin S. Camacho, editorial director for Intrigue Publishing, is also the author of six novels about Washington D.C.-based private eye Hannibal Jones, four in the Stark and O’Brien international adventure-thriller series, and the detective novel Beyond Blue. His short stories have been featured in several anthologies, including Dying in a Winter Wonderland – an Independent Mystery Booksellers Association Top Ten Bestseller for 2008 – and he is featured in the Edgar-nominated African American Mystery Writers: A Historical and Thematic Study by Frankie Y. Bailey.

Mark Alpert
About the Author: Mark Alpert, a contributing editor at Scientific American, is an internationally bestselling author of science thrillers. He is the author of nine science thrillers.His first novel, Final Theory, was published in 23 languages and recognized by Booklist as one of the year’s best crime novel debuts. His next novel, THE COMING STORM, will be published by St. Martin’s Press in January 2019. For more information about his books, visit www.markalpert.com