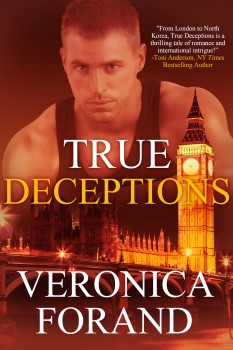 Author Veronica Forand has added a great deal to the romantic suspense genre, with her own life journeys being the perfect backdrop for creating exciting locales and characters that emanate a wealth of emotions.

As she branches out into a new genre of fiction, she speaks with us about her newest release—a suspenseful tale with romance at its core. In this exclusive to The Big Thrill, Forand talks about the travels and meetings that have caused her to better understand the various cultures that exist in this world, and how to share that knowledge with her readers.

You have done extensive traveling. How have these journeys helped in the development of your writing career?

The best part of traveling is learning more about people and how different cultures can affect a person’s outlook. For the most part, I’ve discovered that parents want the best for their children. People fall in love. People disagree over small things, like making too much noise in the apartment next door, and over larger things, such as how to handle immigrants coming into an area. Happiness can be found everywhere, and so can anger and jealousy.

Having traveled to many landmarks and museums, I now head to areas where locals congregate to absorb their stories. A place is not the sum of its buildings, but the collective experience of its people. When my family travels, we’ve been fortunate to view areas away from the more traveled tourist stops. I remember sharing dinner with the French family I lived with in Paris. Their son was worried about taking the entrance exam for university. It was the only thing the family focused on until he received his acceptance. Years later, I shared a dinner with a family in Seoul. The biggest issue in their house was getting their two children into university for a chance at solid careers. Hence, same concerns, different cultures.

I’ve also traveled to Germany, where a dear friend lamented over how the War still lingers in the minds of the older generation and hinders the accomplishments of the country’s youth. He wished he’d been born in Austria, a place where he felt a man could be proud of his homeland without reminding everyone of the atrocities of the past. Understanding a place from the point of view of the people there, and not just from the food served or the monuments erected, influences how I see that part of the world.

When I write, the faces and the attitudes of the people I’ve encountered over the years influence my characters. They should never be a caricature of a place or ethnicity. They should reflect their upbringing, experiences, education, and their own personal mettle. Four people from a small African village with a population of two hundred should have some similarities, but also distinct personalities, hopes, and dreams. My biggest challenge in writing is to make sure all the faces are distinct; the lives unique.

Was Romantic Suspense always a genre you personally preferred?

I’m a huge fan of classic Robert Ludlum as well as Susan Elizabeth Phillips. Thrillers and romance. Love is a crucial part of most people’s life stories, but their stories are varied and often full of drama and heartache. When a love story is woven with intrigue and danger, the adrenaline rush makes for a great journey. Trying to put all the pieces together in a way that makes falling in love amid bullets and blood realistic is the real challenge.

Is there another genre that sparks the imagination? And will you be writing in that area in the future?

My current work in progress is a legal thriller. I’m enjoying the challenge of maintaining a quick pace while providing enough courtroom scenes to keep the story grounded in some reality.

You have been a court-appointed attorney. Did this particular career help with the creation of plotlines?

As a court appointed attorney, you don’t get to choose your clients. This changed the way I viewed the legal system. Everyone needs representation to make the system work. It’s not always pretty, but it’s better than most. My current book contains a conflict between a defense attorney and her client. She doesn’t believe in his innocence, but is forced to represent him. I’ve been in that situation a few times.

When did the passion for writing first come about?

I’ve always written stories in notebooks and on the backs of envelopes when bored, but I never thought about publishing anything until my children headed to school and I joined a local writing group. I received a huge amount of support and information. Without them, I would never have found the confidence to submit to an agent and sell my books.

Give a sneak peek to readers of your new novel, TRUE DECEPTIONS.

TRUE DECEPTIONS is about Simon Dunn, an MI6 operative who lives undercover as an arms dealer. His knowledge and involvement in transactions that would otherwise be underground gives the United Kingdom an advantage in stopping shipments to enemies in transit, or arming allies outside the law. Simon is assigned a computer analyst, Cassie Watson, who has zero field skills. She doesn’t want to be away from her desk, and he doesn’t want her on his team. His biggest mistake is to start caring for her, because his focus shifts away from his work and on protecting the tall blonde from dangers lurking within his agency, and outside of it.

Did you have a particular mentor when it came to writing?

Although I read about the writing process of authors, such as Stephen King, Nora Roberts, and James Patterson, my best mentors came from within my writing group. These writers manage to create amazing books while holding down full time jobs and raising families. Not only were they willing to look over my early drafts, but they were there to share my failures and my successes along the way. I owe them a great deal.

If you could have been the one to create a specific classic character in fiction, who would it have been, and why?

I wish I had written Sherlock Holmes. He’s a protagonist who is not sympathetic or likeable. His flaws can overwhelm him and, yet, readers finds themselves rooting for him nonetheless.

What’s up next for Forand fans to experience?

TRUE DECEPTIONS, of course, comes out October 19th. And I’m currently writing that legal thriller that leaps head-first into organized crime in Boston, Massachusetts. It’s a fun departure from my romantic thrillers.

If you could have lunch with one author, alive or dead, who would it be, and why?

I would want to have lunch and talk with James Patterson. Not only are his books widely read and enjoyed, but he’s consistently one step ahead of the publishing industry with his marketing and sales ideas.

As for Veronica Forand’s ideas, she continues to be right on track when it comes to well-plotted novels and characters that live on in the mind long after the reader has closed the cover. 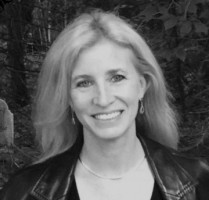 Veronica Forand is an attorney and an award-winning writer of romantic suspense. She’s lived in Boston, London, Paris, Geneva, and Washington, DC and currently resides near Philadelphia. An avid traveler, she loves to roam across continents with her husband and kids in pursuit of skiing, scuba diving, and finding the perfect piece of chocolate.

To learn more about Veronica, please visit her website.