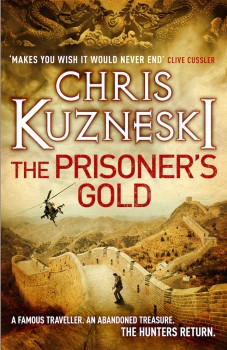 Chris Kuzneski is the author of numerous international bestsellers. As a former college football player at Pitt, a former teacher, and someone who self-published his first novel before the literary establishment took notice, his rise among the ranks of the writing world is a testament to the fact there is no set path to success as an author. His books have sold millions of copies around the globe, and there is no reason to believe his latest will be any exception. Kuzneski was kind enough to answer some questions about his most recent release, THE PRISONER’S GOLD, and give readers of The Big Thrill a little insight into both the book and its author.

Congratulations on your latest novel, THE PRISONER’S GOLD. This is the third novel in the Hunters series. Can you tell us a little about this book and how you chose its central storyline?

Thanks, I’d be happy to. THE PRISONER’S GOLD focuses on Marco Polo and the treasure he supposedly left in China before returning to his native Italy. Although most readers are familiar with Polo’s name and major exploits, few people know about his imprisonment in Genoa and the close friendship he had with fellow inmate Rustichello da Pisa. I wanted to explore a few “what ifs” that sprang from that relationship. GOLD opens in 1298 A.D. in a Genoese prison cell, with Polo recovering from a savage beating at the hands of the guards. In his delirious state, he reveals a little bit too much information about his time in China—information that eventually gets into the hands of the Hunters. Using firsthand details from Polo himself, the Hunters head to modern-day China in hopes of finding the fortune he left behind.

Your protagonists are a team of well-financed experts tasked with tracking down lost and stolen treasures. Do you think the appeal of having characters with specialized backgrounds are easier or harder to write?

Both! In some ways it’s easier because my characters were asked to join the Hunters for a specific reason, so a lot of their DNA is built in to the roles they fill. The team leader, Jack Cobb, is former military. He believes in precision and discipline—the type of things you’d expect from an elite soldier. Sarah Ellis is ex-CIA. She eventually found her calling as a world-class thief but doesn’t view herself in those terms. She sees herself as an acquisitions expert, someone who can get anything if the reason is right. Hector Garcia is an FBI-trained hacker, able to do things with ones and zeroes that Stephen Hawking couldn’t comprehend. Then there’s Josh McNutt, a sniper/weapons expert who has seen more carnage in his life than the others combined. A pretty interesting group, right? Well, now comes the hard part. How do you make these characters unique? I mean, ex-soldiers are featured in half of the action series today, so what makes Cobb and McNutt different from the characters in Tom Clancy’s or Clive Cussler’s books—or even the characters in my Payne & Jones series? Like I said, that’s the hard part: figuring out how to make your characters stand out in a crowded marketplace.

Your first novel in the series, The Hunters, is being made into a major motion picture. What can you tell readers of The Big Thrill about the movie? And what have you learned about the process itself?

The first thing I learned is that I should probably let the movie’s producers (and my attorney) read my answers before you publish them. Seriously, you wouldn’t believe how many confidentiality agreements I’ve had to sign over the past two years. Believe it or not, I think I even signed an agreement that prevents me from telling you how many agreements I’ve actually signed!

However, since I’m feeling kind of rebellious, I’ll fill you in on the basics without getting anyone’s approval. My book was optioned two years ago, shortly after it was released. The main producer (Piers Tempest) is a fan of my work, and he assured me early on that he would value my opinions throughout the process, which is one of the reasons I’ve had to sign so many agreements. Unlike some authors who get cut out of the loop immediately, I’ve been included in most major decisions.

Since I have little experience with screenplays, we decided that we needed to hire a veteran scribe to adapt The Hunters. Thankfully, we lucked out and got one of the best in the business. His name is Robert Kamen, and his films have made billions of dollars. He created the Karate Kid series, the Taken series, the Transporter series, and worked on the Lethal Weapon series as well.

Once Kamen was attached to the project, our next goal was to get a director. The producers ended up hiring John Moore, who is one of the best visual directors in Hollywood. His first major hit was Behind Enemy Lines. In recent years, he has directed Flight of the Phoenix, The Omen, Max Payne, and most recently A Good Day to Die Hard. I’m a huge fan of cinematography, and there’s something about the way that he shoots his films that I truly love. I can’t wait to see what he does with the script!

As for the process itself, the word that immediately comes to mind is slow. Everything—financing, scouting, casting, and so on—takes forever. Particularly casting. I was warned early on by the producers, but I never knew how much went into casting. Not only do you have to find actors who are interested in your project, but you have to find actors who are all available at the same time. And will play nicely with others. And don’t cost too much. Or need top billing. Or about a thousand other considerations. Making things even more challenging is the plan to make a franchise out of my series. That means you have to find actors who are willing to commit to multiple films, which slows the process down even further and eliminates half your casting list before you even get started.

That said, it appears we’re almost ready to roll. Filming will begin in early 2016 in Eastern Europe, and I plan to be there, freezing my ass off as my book comes to life in front of me!

The hunt for treasure has a long history in literature and commercial fiction. Why do you think the appeal seems to be so timeless?

Why? Because new treasures are being found every year! Just recently a train loaded with priceless cargo was discovered in Poland. I got a huge kick out of that story because it’s eerily similar to the events in The Hunters. In my book, it was World War I not World War II, but the basic premise was the same—a train with treasure was hidden from advancing troops then forgotten by time. It makes me wonder if the explorers read my book before they started their search. If so, I think I deserve half the treasure. That’s only fair, right?

What’s next for you? Can you tell fans about your current work-in-progress?

You mean after I return from Poland with my share of the treasure? I’m actually working on a really cool project that I’m not allowed to talk about. I know that sounds like a copout, but I swear my hands are tied on this one. In fact, it’s so hush-hush my attorney doesn’t even know what I’m working on!

THE PRISONER’S GOLD is available this month. Like his other works, the book promises to be a rip-roaring adventure tale, and by all indications Mr. Kuzneski is not about to slow down when it comes to providing thrills anytime soon. 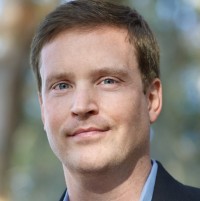 Chris Kuzneski the New York Times bestselling author of eleven thrillers: THE PRISONER’S GOLD, THE FORBIDDEN TOMB, THE EINSTEIN PURSUIT, THE HUNTERS, THE DEATH RELIC, THE SECRET CROWN, THE PROPHECY, THE LOST THRONE, SWORD OF GOD, SIGN OF THE CROSS, and THE PLANTATION. His novels have been translated into more than twenty languages and have sold millions of copies worldwide. The first book (THE HUNTERS) in his new series is currently being made into a major motion picture. It will be released in 2016.