Agro-Terrorism: “A Match Made in Hell” 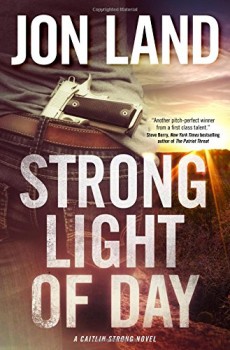 Picking up the latest novel in the Caitlyn Strong Texas Ranger series is like checking in with an old friend: you can’t wait to begin where you left off, and you’re always a bit sad when the visit comes to an end. Which is proof positive that Jon Land deserves the accolades he’s earned from readers, reviewers, and his peers.

Interviewing Land about his latest novel, STRONG LIGHT OF DAY, was just as fun as reading one of his books. See for yourself:

As with most of your books, in STRONG LIGHT OF DAY there are many “spinning plates”—conflicts—put into play. For example, the missing students, the rancher’s herd, the SEALS ’ find, just to name a few. Which was the first plot point that came to you? And in what order did the others follow?

Great question to start off. And the answer is none of the above. The first plot point was the notion of a nightmarish genetic anomaly created by exposure to a genetically produced pesticide—I got that from an article in The New York Times. As soon as I saw that, a lightbulb flashed in my head, spelling “agro-terrorism.” Some research followed where I determined this was something the Russians really did look into doing during the Cold War. So now I have the reconstituted remnants of an old Soviet plot, which gave me one set of bad guys. For the other, I looked to a greedy petro-chemical magnate whose miraculous discovery turns out not to be so miraculous at all. Other things sprang from there, like the disappearance of the high-school students on a field trip.

But here’s the simple truth: I didn’t know exactly how all the individual strands were going to connect when I conceived them—in other words, the pieces of the puzzle kept coming, but I had no idea initially how they were going to fit together.

That’s part and parcel of my writing process.

To your mind, why are Russia’s territorial ties with Afghanistan such a meaty plot point?

Well, you had one generation of baddies—the old Soviet Union—usurped and replaced pretty fast by the next generation of baddies in the form of  Bin Laden and al-Qaeda. As a kid falling in love with thrillers, it seemed like every book involved Nazis or neo-Nazis. The Russians took their place during the Cold War and then Islamic radicals replaced the Russians. So the use of Afghanistan in STRONG LIGHT OF DAY is about marrying a terrorist strategy with Russian political hardliners. Call it a match made in hell.

Big Agra is also scrutinized in STRONG LIGHT OF DAY. What research did you do to come up with the “what if” factor of a pesticide-gone-wild?

Most of it centered on the unintended consequences of how something genetically based affects other species. The pesticide in question was remarkably effective in preventing crop loss due to one insect species, but in the process literally made a monster out of another. The thing that scared me the most was how little we actually know about the effects of these super-chemicals. Anytime you mess with nature, something bad is likely going to happen. We’ve seen this time and time again in fact and my using it as a fictional plot point is kind of a cautionary tale.

What moves in the recent geo-political dance seem (sadly and ironically) in step with the STRONG LIGHT OF DAY’s plot?

Wow, that’s a good question and one I’ve never thought about. Well, first and foremost would be the extent to which our relationship with Putin’s Russia has deteriorated. And the weakness of Russia’s economy and, apparently, its military as well creates a kind of desperation to remain relevant on the world stage. I never could have written STRONG LIGHT OF DAY in its current form ten years ago or even five probably. I also think the book deals heavily with the Zero sum game of keeping the lights on and fuel in the tank when weighed against harm we’re doing to the environment and ecosystem. Look at all the damage fracking has done in North Dakota, causing earthquakes and all. Or how about the coal refuse that poisoned an entire river in North Carolina last year? I didn’t create those—what I did was to create is a variant on them that plays as a metaphor as well as a plot point.

What was the hardest thing about writing about the kidnapping of a whole classroom of high-schoolers?

The fact that I had no idea why the villain risked everything to save them until the very end when one of my last readers gave me the final twist! Well, that and the fact that once I committed to it, I opened a big can of worms. I owe Caitlin Strong a big debt for the closing. She was the one who figured out how the kidnapping actually happened and where the kids were taken. Beyond that, though, this particular plot point gave me the opening to take a fairly major character in a bold new direction. To challenge my characters emotionally in a way they haven’t been challenged before.

What role does research play in the development and validation of your scenes and plots?

Oh, it’s crucial. I live by the old Robert Louis Stevenson axiom that it doesn’t matter to be me if you believe everything I’m writing about; what matters to me is that you don’t disbelieve it. The trick is to give the reader just enough reality, the savory crust, so he or she doesn’t question what’s underneath it. I also live by the credo that when describing a scene, always know where the light is coming from. And one of a writer’s primary responsibilities to the reader is to describe what that light shows, what the characters see, accurately to the point that someone from West Texas is nodding as he or she reads the scenes in STRONG LIGHT OF DAY set in West Texas.

From start to finish, what is your writing process?

As I intimated before, I don’t outline. I write by the seat of my pants, believing that if I don’t know what’s going to happen next, the reader can’t possibly know what’s going to happen next. I live with an idea, a general concept, for months before I start writing but I really don’t know where I’m going, or how I’m going to get there, until I dig into the story and let it lead me where I need to go. To me it’s about instinct and experience. I trust my instincts and I’ve done this often enough now to have the confidence to know that elusive puzzle will fit together in the end. Because here’s the thing, the bottom line: more than a writer, more than an author, I consider myself to be a storyteller. The story is everything and if you keep that in mind, you’ll always have the reader in the palm of your hand.

This is the seventh book in the Caitlin Strong series. What do you feel is the key to keeping a series fresh?

No doubt about it: continuing to challenge your characters. As you know, I age my characters chronologically—I think doing anything else is being disingenuous to the reader. That’s the thing I love about Cort Wesley Masters’s two sons. When I started the series, Dylan and Luke were just boys. As they’ve gotten older, though, their development has become crucial to the flow of the series, both structurally and emotionally.

The great John D. McDonald once defined story as “Stuff happening to people you care about.” Well, one of my favorite parts of STRONG LIGHT OF DAY is watching how Caitlin and her mostly boyfriend, Cort Wesley, deal with a revelation about Luke’s character. The last book in the series, Strong Darkness, opens with his older brother being beaten within an inch of his life. Everything jumps off from there in a way similar to the fact that the revelation about Luke, involving why he wasn’t kidnapped on that field trip with the other victims, becomes vital to both the structure of the book and its emotional core. And always being able to define what the emotional core is keeps the series fresh.

Caitlin is a fifth generation Texas Ranger. Obviously, this legacy hangs heavy on her shoulders. What do you do to keep her from using it as an emotional crutch or professional liability?

I think it’s more the opposite of that. Such a legacy puts a tremendous amount of responsibility on those shoulders to live up to her legendary ancestors. And let’s not forget the fact that she’s a woman striving to succeed in a male-dominated world. But that doesn’t matter to her and Caitlin is hardly one to rest on her laurels. She has a gunfighter’s mentality and an old-fashioned notion of justice, pretty much the same code that the other Texas Ranger Strongs lived by.

The most fun I have with this series is always crafting the flashback sequences to one of her forebears in a sub-plot that inevitably ties into what she’s dealing with in the present. That’s just a blast from a plot standpoint. From a character standpoint, it lets us see that, sure, times have changed but not good and evil. Good guys are still good and bad guys are still bad, although the lines tend to be a bit more blurred. It’s Caitlin’s job to sort one from the other, just like it was the job of all the Strongs that wore the Ranger badge before her. Let me put it this way: Times change, but heroes don’t.

What is your next project, and when can your readers see it in print?

March will see the publication of my second nonfiction book, Takedown, which follows a celebrated undercover drug officer who returns to his old haunts from his position as a small-town police chief to bring down one of the biggest drug gangs in the country. And June will see publication of The Rising, my collaboration with the great Heather Graham, 2016’s ThrillerMaster. It’s the first time both of us have featured teenagers, high school seniors in this case, as heroes and also the first time we’ve each written science fiction. But the early buzz on the book has been off the charts and I’m as excited as I’ve ever been professionally. Not bad for an old vet, right? But that’s the amazing thing about this business: You never know when the next brass ring is going to appear.

Jon Land is the USA Today bestselling author of the 37 novels, including seven titles in the critically acclaimed Caitlin Strong Texas Ranger series. The most recent prior to STRONG LIGHT OF DAY, Strong Darkness, won the 2014 USA Books Best Book Award and the 2015 International Book Award in the Thriller category. That followed Strong Rain Falling, which won both the 2014 International Book Award and 2013 USA Best Book Award for Mystery-Suspense. Land is a 1979 graduate of Brown University, lives in Providence, Rhode Island.

The October 2015 Edition of The Big Thrill