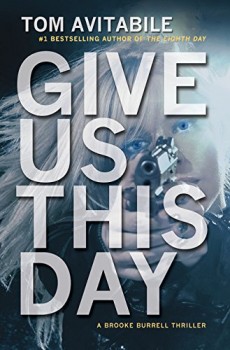 Tom Avitabile, author of the popular Bill Hiccock series, is back with a new and exciting tale featuring former FBI agent, Brooke Burrell. In this series opener she finds her planned return to Hawaii turned upside down when an assignment she took to make some cash while her husband is deployed at sea explodes. Witnesses are dying, evidence is vanishing, and the masterminds behind it all are about to take down a whole city. So much for Brooke Burrell’s early retirement.

The Big Thrill recently checked in with Avitabile to discuss his book and what lessons he’s learned from his experiences as a writer.

Tell us a little about GIVE US THIS DAY. Is it part of a new series?

Yes, it is the first novel of the Brooke Burrell series. Brooke appeared in The Eighth Day, the first Bill Hiccock novel, as a minor character. In the next two books in the series, The Hammer of God and The God Particle, she had larger roles and the reader sees deeper dimensions. They see beyond her steely, professional law enforcement persona as she embraces her long-denied emotional side. She also rises to become the most-trusted operative of the president of the United States, a position actively sabotaged by the “old boy network” that’s still on life support, shuffling with walkers down the halls of power.

What lessons did you learn from your previous series that helped you to craft this story?

I learned that in a character-based action thriller, a female protagonist has to be built organically from the ground up. It’s not enough to develop the perfect action hero, with skill sets, wit, and emotional depth and then hang a female name on character and change all the pronouns to her and she. That would be easy, but incredibly dishonest and I believe blatantly transparent to any woman reader.

Therefore, Brooke’s wiring has to be different than a male’s, and although they may ultimately take the same action, the same physicality, it has to be for different reasons, intentions and motivations. I am pleased to say that early positive reviews and blurbs from leading authors like Lisa Gardner and Olivia Rupprecht seem to imply that I have achieved that goal.

How do you go about conducting research for your thrillers?

My plots, content, logistics, and dynamics are pulled from my two lives: my former career as a consultant for the House Committee on Science Space and Technology, and my rich fantasy- and wonder-filled existence.

What is your favorite part of the writing process?

The unconscious part. When characters determine their own fate. When I read what I wrote six months ago in a manuscript and I don’t recognize it, or would not be able to identify it in a court of law as having been written by me, that’s when I feel I’ve succeeded. That’s when I think I write the best, free of all filters, rules, and self-conscious ego that so often tries to burrow into one’s writing.

What do you hope readers will take away from GIVE US THIS DAY once they’ve finished it?

That they can’t wait to read Brooke’s next adventure, Forgive Us Our Trespasses.

Tom Avitabile, a Senior V.P./Creative Director at a New York advertising firm, is a writer, director, and producer with numerous film and television credits. His extensive background in computers and engineering led him to work with the House Committee on Science Space and Technology. Tom’s powerful imagination, fed from his experiences in Washington, allowed him to conjure up not only possible security threats, but also real life scenarios relating to how the government and individuals would respond to the high-tech assaults that are featured prominently in his three book “thrillogy.” These novels chronicle the exploits of Science Advisor to the President, “Wild” Bill Hiccock. The first techno-thriller of this series, The Eighth Day, became a Barnes and Noble #1 bestseller. In his next thriller, The Devil’s Quota, Avitabile departs from the high-tech genre and sheds daylight on an evil international syndicate, a story of sexual deviation, greed, human trafficking and corruption.