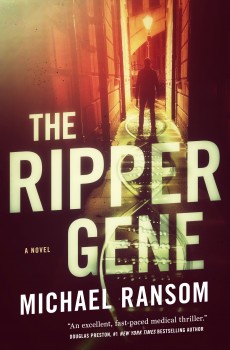 Michael Ransom’s THE RIPPER GENE, as strongly suggested by its title, is the fictional existence of a pattern of DNA that indicates someone has the potential for extreme psychopathy.

The reader is guided through the story by the protagonist, Lucas, who is not your average sleuth, but an FBI profiler with a scientific background—expect to come across scalpel-edged forensic and medical detail.

The entire backdrop of the novel cleverly forms a sinister commentary on the nature of a killer: is murder a biological predisposition, beyond conscious control? Pretty dark stuff, but more fascinating as a result.

Ransom’s clever writing manages to impart more emotions beside those of the spine-tingling variety. Early on in the book, there is personal loss, which adds a layer of sadness that helps to develop the main character’s motivation. Anger also abounds, along with resulting profanities; for some there may be a little too much heated language, but for others this may positively add realism, tension, and grit.

The book will make you think, which I strongly suspect is the author’s intention, seeing as he is a man of science and reason. Fortunately, a gene for murder doesn’t really exist—unless the author knows something we don’t…

I was lucky to speak to him about the creation of the book and his entry into the world of thriller writing.

As a respected academic writer in the world of precise science, what gave you the incentive to step into the muddy waters of thriller fiction?

I’ve always had these dueling desires to enjoy the best of both worlds: to conduct experiments and write up precise scientific articles on the one hand, and to write creative poetry and prose on the other. In high school I’d compete in the annual Math and Science tournament, then turn around and participate in the regional writing competition. In college I double majored in Chemistry and English, receiving a Chemistry degree from Mississippi College while studying humanities at University College London.  After college I turned down a full scholarship to medical school, and instead took creative writing classes in the MFA program at the University of Idaho.  And once I finally committed to a PhD thesis in Pharmacology at the University of Pennsylvania, I began writing my first novel.  For as long as I can remember, I’ve always swung back and forth between the two kinds of writing, and have come to appreciate that I’m probably a bit more of the exception than the rule.

The book is written predominantly in the first person. Did you settle on that perspective for any particular reason?

Yes, one of the earliest decisions I made about THE RIPPER GENE was to write it in the first person.

All of the short fiction I’d written to that point, as well as my first five-hundred-page manuscript, had been written in the third person.  I switched to first person the moment I decided I’d write a mystery because it seemed absolutely natural to me— if you write from only a single perspective, then your reader can only sense, experience, and “know” what your main character uncovers during the due course of the story. Thus the first-person’s restricted viewpoint seems very well suited for helping the author control the level of suspense and unfurl the solution to the mystery at a controlled rate. First person also made it easier to create a very strong voice for my narrator, which I considered critical when trying to establish a new series around a potentially interesting character, like my neuroscientist-turned-FBI-profiler Lucas Madden.

While first person facilitates a level of control for the author, it also means that the main character doesn’t always “see” the crimes being committed… in fact, he/she usually doesn’t.  And yet, they must happen.  So the author of a first person mystery has to create a story within a story, but then generate action and dramatic tension for the narrator in ways indirectly related to the main action.  While that restricted viewpoint makes plotting a bit more challenging, I still think first person is the most effective way to relay a mystery to readers, to pull them into another world and make them care what happens.

The protagonist Lucas was a scientist who has entered the world of crime fighting. I can’t help but wonder if you share any aspects of Lucas’ character?

Our scientific backgrounds are probably the most obvious trait we have in common.  Giving Lucas a history as a molecular geneticist enabled me to carve out a somewhat “rounder” character with a credible backstory regarding his cloning of the ripper gene. There are a few other similarities, such as Lucas also being a humble, ruggedly handsome, first-born son of a preacher from Mississippi…but that’s about the extent of the [very modest] similarities between novelist and protagonist.

It was far more important for me to create a compelling character who would have the stamina and personality to doggedly pursue the mystery in THE RIPPER GENE, no matter where it led. I researched the various iterations of the Behavioral Analysis Unit in the FBI to give Lucas a mix of traits that would befit a modern-day FBI profiler. Outside his scientific and professional background, I also wanted to give Lucas a complex backstory that had resulted in a tangle of antagonistic relationships with friends, family, and colleagues in the present-day. To balance that more difficult aspect of his character, I also exposed a softer side that he exhibits only rarely: alone with his younger sister, caring for his beloved nieces, or even playing with his dogs Watson and Crick. Ultimately, I knew I wanted a “scientist-turned-profiler,” but beyond that, I just wanted to create a fictional detective that had as many believable and interesting facets as possible. I think that FBI agent Lucas Madden—with all of his damage, history, heroism, self-doubt, and inner demons—is the kind of deeply-layered, conflicted detective who fits the profile I was trying to create.

Looking back at the whole process of writing THE RIPPER GENE, how would you describe the experience?

The entire experience was long but rewarding, and the only things I’d change would be 1.) starting sooner and 2.) spending even more time on it each day.  The concept of THE RIPPER GENE crystalized for me when I read an intriguing research article in the journal Science and began asking the classical writer’s question “What if?” over and over.  I conducted a lot of research into the FBI, including actively participating on an entire day’s tour of the New York FBI Field Office as part of Thrillerfest.  Most of what I learned during research was fun, but some of it was scary as well, because you have to research the bad guys, too.

I did use a chapter-by-chapter outline during the actual writing of the novel, but was completely comfortable deviating from the plan whenever the writing took me in a different (and more interesting) direction.  I tried drawing up character sketches too, but in my experience it felt too much like playing Dungeons and Dragons rather than truly helping me write a story.  So, I didn’t use that approach for long and instead let the various characters’ actions and words define them and their backstories as needed.

The hardest part of the process was the revision, because it’s brutal and demanding and unforgiving…but at the end of the day, the revision process is what made all the difference, and helped the book reach publication.  In a word, however, the entire process of writing THE RIPPER GENE was nothing more or less than absolutely “fulfilling.”

Do you plan to write more thrillers, or are you thinking of branching out into other genres?

I do plan to write more thrillers, and I also plan to branch out into other genres.  I always work on several projects in parallel, until one takes off… so I’m currently farthest along on two fronts: 1.) a modern-day biomedical thriller with a scientific premise based on some of the newest genetic engineering discoveries of the last few years, and 2.) a literary coming-of-age mystery that takes place in the 1980’s Deep South.  For now I’m just excited to see THE RIPPER GENE in print and to finally feel like a bona fide part of the International Thriller Writers community! 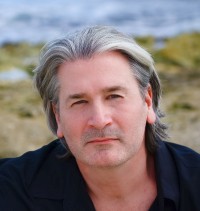 Michael Ransom is a molecular biologist and a recognized expert in the fields of toxicogenomics and pharmacogenetics. He is widely published in scientific journals and has edited multiple textbooks in biomedical research. He is currently a pharmaceutical executive and an adjunct professor in the Department of Pharmacology at the University of Pennsylvania School of Medicine. Raised in rural Mississippi, he now makes his home in northern New Jersey. The Ripper Gene is his first novel.

The Gates of Evangeline by Hester Young