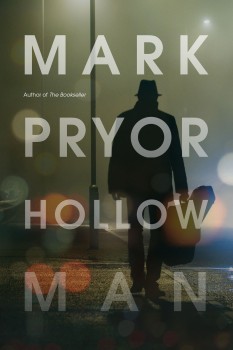 With something like four percent of the people taking psychopathy tests scoring “psychopathic,” you might be inclined to wonder why the world isn’t harsher than it is. Fortunately, most socio- or psychopaths find meaningful work as CEOs, politicians, lawyers, and in other demanding high-profile roles where a lack of empathy can come in handy.

In HOLLOW MAN, Mark Pryor takes us into the mind of one such character and shows us what can happen when personal controls fail and the wheels start to come off.

Dominic’s world is tightly managed, to the point of being manipulated. He fakes his way through human interaction so well, his peers in the district attorney’s office are oblivious. He uses his side gig as a guitarist to hook up with college students who are afraid of hurting the presumably emotional artist when their crushes wear off.

None of which suggests he’s going to actually care when a beautiful young woman presses her way into his life then cries wolf. And Dominic doesn’t care. But he’s intrigued enough to step off his carefully crafted track and see where this unexpected development takes him.

Where it leads him is on a rough ride through some of Austin’s less-traveled roads and into the criminal mind of a man who knows both sides of the game.

In this interview for The Big Thrill, Mark Pryor gives us a peek at Dominic, at Austin, and at his own more empathetic place in the world.

With a successful series in play, what drew you to write a stand-alone?

This book was a long time in the making, actually, with the seeds being sown right around the time I was writing The Bookseller, the first in my series. But I never really sat down to work on it, I think because I couldn’t quite put my finger on the main story line or even get a full picture of Dominic, my protagonist. But it all came together one day when a friend told me about this guy in Austin who rents out trailers and collects the money in cash, driving around the worst parts of town with a van full of used dollar bills once a month. The fuse was lit, and I couldn’t help but start writing.

I found Dominic’s acute self-awareness of his sociopathy interesting and, oddly enough, easy to empathize with. Did he come to you as a fait accompli? Or did you have to work to make him a dark protagonist we could root for?

He was absolutely the most fascinating character to write, and one of the reasons the book took so long was the research I did into his “condition.” Frankly, the more I learned, the more scared I became of him! As far as putting him on the page, I really did have to stop and think about what he’d do and say. You have to understand, I’m the guy who watches videos of those soldiers coming home and surprising their wives and kids, and I tear up every single time. I don’t have the stiff upper lip every Englishman is supposed to have, so creating someone so free of emotion was a challenge, but an exciting and illuminating one.

That said, you’re absolutely right that I had to make him someone we could root for. And given his nature, I had to do that pretty quickly. He gets some bad news early on, in fact that whole first day is pretty crappy for him, so I think maybe the reader gets to see his human side, such as it is, right away. It helps, too, that he’s narrating so he gets to be a wee bit manipulative from time to time, which earns a little sympathy from the reader (whether justified or not!).

Dominic’s POV gives us an immersive yet detached view of Austin. Does that reflect your own experience as a non-local, at least when you first arrived in the city?

Yes, absolutely, that’s a great way to put it. You know, we kind of came here on the fly, moving from Dallas for my job, so we didn’t get much of a chance to research the place. And having lived in quite a few cities and countries in my life, I definitely have kind of a detached experience, certainly to begin with. Not so much now. I love living here and when my wife and I wonder about where else we might like, we generally agree that Austin is about as good as it gets.

Austin has an image that’s almost the opposite of noir, what with its being a musical university town with a bustling economy. What was it like setting a dark story there?

I hadn’t thought about it in those terms, but I suppose it does have a rather positive, happy image. Remember, though, that I’m a prosecutor and have done more than a hundred ride-alongs with the cops, so I’ve seen the darker side of the city many, many, times. I can picture, for example, the trailer park that features in the book—not because I’m describing an actual trailer park, but because I’ve been to so many like it with the cops.

Austin is featured in HOLLOW MAN and Hugo Marston traipses from one European hotspot to the next. Are cities mere canvases for your stories or do they affect them more than that?

I think they are integral to my stories. For Hugo, Paris, London, and Barcelona have played central roles in the sense that they are hurdles for him to overcome—the language, the locations, even the food. And if a good story is about creating and overcoming conflict, then everywhere he goes Hugo has one extra piece of conflict, one more obstacle than if he were operating in Austin, for example. Some people have outrageously suggested that I set the books there just so I can travel myself, for research. Naturally, I’m horrified by such outlandish accusations and can assure everyone that my visits to Europe are mere by-products of my books, moments to be endured and learned from, nothing more.

Back to the question, I would say that it’s sort of the same for Dominic in HOLLOW MAN. He not only has to fit himself into humanity, but he has to do it in a place where he already sticks out—he’s an Englishman in Texas. This is a man who wants to present himself as normal, but who isn’t. Austin is a comfort to him with its music scene, but even that becomes a hostile battleground, a place for conflict and a driver of the story.

There are some obvious parallels between Dominic and you, what with your role as an assistant district attorney and being a U.K. native. How far do the parallels go? Can we find you playing guitar now and then on SoCo? (Notice, I’m not asking whether you’re a psychopathic lawyer.)

I am very grateful for that, thank you! No, as explained, puppies make me gooey and I get misty-eyed at weddings, so I’m no Dominic. I also don’t play music, or even go to many live events—my wife is a huge music lover, so whatever I listen to generally comes through her. And ask me to sing at your peril.

I’ve thought about the parallels and I think a lot of it has to do with that old saw, “Write what you know.” When creating a sociopathic musician, I needed to counterbalance two unknowns with something easy and familiar, like the job. Of course, I don’t think it was that calculated, just because Dominic’s job fits perfectly with the story. And him being English, well, I have a weakness for fish-out-of-water stories, and so it was fun to put a boarding-school-educated Dominic into cowboy boots in the Texas heat. I, myself, tend to wear sandals.

HOLLOW MAN is billed as a stand-alone, but you found an interesting way to shift Dominic out of his usual job at the start of the book. It begs the question: could he be back as an ADA in a later book? Which is another way of asking, what’s next for you?

A number of people have asked me if there will be a sequel. I will never say never but I can’t imagine what the story would be. The essence of HOLLOW MAN is the revelation of his state, and his descent into criminality. I would worry that another book about him would end up as just another psychopathic-killer story, and I worked very hard to avoid that with this book. But, like I said, ideas blindside me all the time, so I won’t make any promises.

Otherwise, I’ll keep up with the Hugo Marston series, I’m working on book six right now. I hope there will be many more over the years, as I enjoy writing them so much. I’ve also got another stand-alone rattling around in my head, it has to do with a father and his son being tracked across west Texas by a very bad man. It’ll be crime fiction, of course, but it’s also about the relationship between the two, how it changes and deepens, with adversity. Think The Road, with less apocalyptic devastation and more quotation marks! 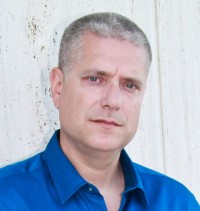 Mark Pryor is the author of the Hugo Marston novels The Bookseller, The Crypt Thief, The Blood Promise, The Button Man, and The Reluctant Matador. A native of Hertfordshire, England, he is an assistant district attorney in Austin, Texas, where he lives with his wife and three children.

Rob Brunet
Rob Brunet’s STINKING RICH asks, What could possibly go wrong when backwoods bikers hire a high school dropout to tend a barn full of high-grade marijuana? Dubbed “deviously funny” by Canadian Mystery Reviews, the novel was listed on Crimespree Magazine’s Book Picks for 2014, and named one of the year’s top debuts by MysteryPeople. Brunet’s short crime fiction has appeared in Ellery Queen Mystery Magazine, Thuglit, Shotgun Honey, Out of the Gutter, Noir Nation, and numerous anthologies. He loves the bush, beaches, and bonfires, and lives in Toronto with his wife, daughter, and son.