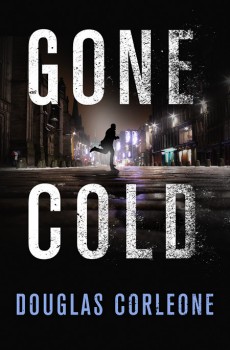 Douglas Corleone followed an unusual route to becoming an author of legal thrillers. Diving deeply into the wave of courtroom mysteries flooding bookstore shelves in the nineties, he was inspired to become a lawyer. Fiction morphed into fact and Corleone practiced criminal law until he edged toward burnout and took up the pen himself.

Now, with GONE COLD, his seventh novel between 2010 and 2015 and third in the Simon Fisk series, Corleone finds himself toiling just has hard but having much more fun, and doing it on the shores of Hawaii instead of pounding the heated pavement of New York City on his way to court. Along the way, he garnered the Mystery Writers of America First Crime Novel Award and was a finalist for a Shamus.

With the latest Fisk just released, the previous one now out in paperback, and the first of his Paul Janson stories based on the Robert Ludlum character on the shelves, Corleone has his hands full. Fortunately, he found the time to sit down for a few minutes with The Big Thrill.

You started your career as a criminal defense lawyer in New York City. What inspired you to make the transition to fiction and what was that process like?

Ironically, the legal thrillers of the 1990s—especially those of John Grisham, Steve Martini, and John Lescroart—inspired me to become a criminal defense attorney in the first place. Once I began practicing law, I returned to those novels and realized they’re fairly silent on the day-to-day lives of criminal lawyers—and for good reason. Practicing criminal law (in New York City at least) generally entails a lot of crowded subway rides between boroughs and sitting around courtrooms for hours while you wait for your cases to be called. The other difference is that the clients in those novels are innocent, which isn’t usually the case in real life. The only novel that really comes close to what it’s like to practice criminal law in a big city is The Lincoln Lawyer by Michael Connelly. I think Michael Connelly’s being a non-lawyer was an asset to him in crafting Mickey Haller—he not only captured the routine but the weariness most of us feel after a few years (something lawyers who write fiction might not want their protagonist to admit in a novel). By the time I quit the law, I was already tired of practicing, so the process was liberating. Writing Kevin Corvelli was a blast. It was later—when I had to balance writing with the business of writing—when I started to miss the handshakes and retainer agreements, even the prison visits.

How did your legal background shape you as a novelist?

Practicing law is good preparation for writing a novel. In addition to the priceless material I collected, I’d developed strong organizational skills and a knack for keeping facts straight in my head. That helps immensely, especially when you’re tackling more than one project at a time.

What is the genesis of U.S. Marshal Simon Fisk?

Two years before I started writing the first Simon Fisk thriller, Good As Gone, I read a one-page article on an investigator who works out of Tampa. He exclusively helps the parents of children who’ve been abducted by their non-custodial parent and brought overseas to countries that don’t recognize U.S. custody decisions. I printed the article and stashed it in a filing cabinet. Two years later, when my editor asked to see something new, I immediately dug through that filing cabinet looking for that page. I reread it, confirmed that I loved the idea, and within a few days I had a synopsis for the first novel to feature Simon Fisk.

GONE COLD is an international thriller, following Simon as he races across Ireland and the UK as he hunts down a young woman who may (or may not) be the daughter he lost years earlier. What was the research process like to prepare for writing such a wide-ranging novel?

Fortunately, when I was practicing law in New York, I had the opportunity to travel a lot. I fell in love with Europe and visited a number of different cities within a few years. My favorite city in Europe is Dublin. So when it came time for Simon Fisk to finally get a potential lead on his daughter, I knew it had to come from a pub in the Temple Bar district of Dublin.

Your debut novel, One Man’s Paradise, featured defense lawyer, Kevin Corvelli. How much of you is reflected in Kevin?

More than I’d like to admit. But the me reflected in Kevin Corvelli is the thirty-year-old me. I’m sure if I reread the Kevin Corvelli series today, I’d see much less of my current self than I did when I wrote it. Kevin Corvelli is a cocky, hard-drinking Manhattanite who suffers from culture shock when he moves to Hawaii. I’ve now lived in Hawaii for seven years, I rarely drink, I have three small children, and being a full-time writer has instilled in me far more humility than any former lawyer wants or needs.

Arguably, Kevin and Simon represent opposite ends of the legal system. What are the challenges and rewards of writing characters from such different perspectives?

Writing Simon Fisk after Kevin Corvelli was a tremendous challenge. I’d more or less been in Kevin’s shoes at one time in my life, but thankfully, I’ve never been in Simon’s. Writing from the perspective of a man who lost his wife and only daughter was emotionally draining. Sometimes it was difficult to figure out what drove Simon to continue to get out of bed in the morning. But when I did figure out what drove Simon, I knew he was a rare individual and that his tough-as-nails exterior was mostly a façade. The reward was the satisfaction of learning I possessed at least some range in creating main characters. Kevin Corvelli was more of an anti-hero, and not everyone loves anti-heroes.

In addition to Simon Fisk and Kevin Corvelli, you are also now writing the Janson novels based on Robert Ludlum’s character. How did that involvement come about?

I’ve been a fan of Robert Ludlum’s work for as long as I can remember. I’d discussed his work with my agent countless times. So when the current editors of the Ludlum books told my agent they’d read my work and wanted me for the next Janson novel, we jumped at the opportunity. It was one of the rare occasions in this industry when all the stars aligned.

What are the particular challenges of writing installments in a series created by another author?

You feel a real obligation to that author’s fans. I reread the Paul Janson novels and the first three Jason Bourne novels in order to get a real feel, not only for his main characters, but for his antagonists. The fictional Consular Operations is, in my opinion, one of the greatest creations in thriller fiction. Robert Ludlum’s Cons Ops novels (like Bourne and Janson) are truly unique to the espionage genre.

In your real life, you’ve made the move from Manhattan to Hawaii. What brought about such a drastic change in your residence and how has that impacted your writing?

I dislike winters, probably more than most people. I often became depressed during east coast winters. I actually moved to Hawaii without having ever been to the islands before. But it didn’t take long for me to decide I’d made the right choice. The move very much impacted my writing in that I’m much more productive when the sun is shining. And Hawaii provided the setting for my first three novels.

What’s up next for Douglas Corleone?

I’m currently working on a thriller set in New York City. I’m also ghostwriting a novel. Once I finish those projects, I’m planning on writing a screenplay. 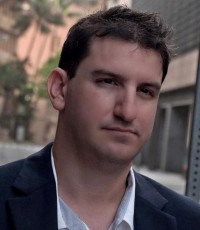 Douglas Corleone is the author of contemporary thrillers. His debut novel ONE MAN’S PARADISE, introducing hotshot defense attorney Kevin Corvelli, was a finalist for the 2010 Shamus Award for Best First Novel and winner of the MB/Mystery Writers of America First Crime Novel Award.

A former New York City criminal defense attorney, Douglas Corleone now resides in the Hawaiian Islands where he is at work on his next novel.