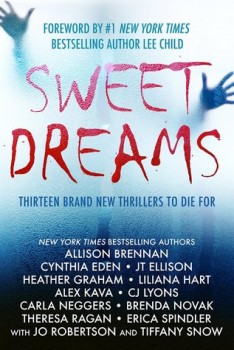 Thirteen great new thrillers for $9.99 is a sweet deal. Now you can get that deal while contributing to a very worthy cause. Just grab the SWEET DREAMS Boxed Set (Thirteen New Thrillers by Bestselling Authors to Benefit Diabetes Research).

This limited edition collection is a dream-come-true for avid readers. But how did thirteen brand new novels and novellas written by New York Times and USA Today bestselling authors end up in one giant e-book? That was the work of Brenda Novak and her charity, the Online Auction for Diabetes Research. Novak, a bestseller in her own right, had personal reasons for curating this boxed set and contributing the money it raised to the Diabetes Research Institute.

“When my son was diagnosed with Type 1 at the age of five,” Novak says, “I knew I wanted to do all I could to fight the disease that threatened his health on a daily basis. That’s why I started my annual online auctions for diabetes research, which I ran for ten years.”

Last year, the first boxed set Novak curated, A Sweet Life, raised $100,000 for diabetes research. This year she’s back to raise more. Novak created a “wish list” of the biggest names in the genre and reached out. The authors in the boxed set all replied that they’d be happy to help.

“I explained that I thought we could raise more money with brand new work, and they were generous enough to contribute despite the added work that would cause,” Novak says. “I’m still in awe of the fabulous reception I received. These ladies—and Lee Child, who provided the incredible foreword for SWEET DREAMS—are some of the most generous and socially-conscious people on the planet.”

Theresa Ragan’s reaction was typical when Novak asked her to participate.

“My first thought was, how can I possibly squeeze in another project?” Ragan says. “And then my second thought was, how thrilling it was to be asked to be included. I couldn’t possibly pass up the chance. I am honored.”

Ragan contributed her newest suspense, Dead Man Running. It kicks off when an accused murderer escapes prison in a body bag and sets out to prove his innocence.

The stories in SWEET DREAMS cover the spectrum of thrillers. Novak purposely left her request to the authors wide open. She says her fundraising philosophy is to make everything a win/win.

“I feel like I managed that with this project by telling the authors to write something that’s connected to their other books,” Novak says. “That way they can win over new readers who will purchase and read their backlists.”

Heather Graham took advantage of the chance to write about some old friends her fans will know.

“My characters—Danni Cafferty and Michael Quinn—had only made one other foray out of their mainstream Mira stories,” Graham says, “and that outing was for a International Thriller Writers’ short story book and lots of fun as well. Quinn teamed with F. Paul Wilson’s Repairman Jack for FaceOff.”

Michael Quinn is accustomed to dealing with the deadly, the dangerous, and the extreme—but a haunted spinning wheel? And on the eve of his wedding? In Graham’s story, Toys In the Attic, he’ll have to risk his life, limb, and soul for love to save Danni Cafferty from the cursed creation if he’s ever to get them both to the church on time—and alive.

Graham called it a privilege to be involved in a project for a cause this important. And even though the stories are all thrillers, the cause borders on science fiction. All funds will go toward development of the futuristic BioHub, a mini organ that senses blood sugar levels and delivers insulin in response, in real time. That would do away with the severe highs and lows most diabetics suffer. 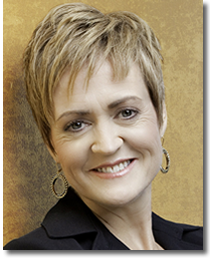 And, according to Novak, “It could end all the finger pokes, shots, and expensive pumps. It could preserve the diabetic’s quality of life for years and years.”

That’s why New York Times bestselling authors like C.J. Lyons were willing to invest their time and talent in this project. As Lyons explains, it takes her almost as long to write a novella as a full length novel because working out the story and character arcs is the time consuming part of her process.

“Once I know the character’s journey, the rest is fairly easy, but until then it’s always a start and stop struggle,” Lyons says. “Bad Break took me around two months to write.”

In this story, workaholic FBI Agent Lucy Guardino takes her daughter on vacation. The last thing she expects is to become embroiled in a murder—or for her teenaged daughter to play amateur sleuth with disastrous consequences.”

Carla Neggers, who is thrilled to be part of a project to support research into diabetes, says her novella Secret Hideaway hopefully will be a fan pleaser too.

“I’ve had countless readers ask for a story with twins Ellen and Maggie Galway, the daughters of Texas Ranger Jack Galway and his wife Susanna, who appear in The Cabin and Stonebrook Cottage,” Neggers says. “I’d been working on Secret Hideaway on and off for a while, and it’s a pleasure to have it be a part of such a great collection, with so many wonderful authors.”

When her twin sister disappears, Ellen Galway enlists the help of a Texas Ranger. Secret Hideaway is a story of love, danger and revenge.

For Erica Spindler, SWEET DREAMS presented a unique opportunity for her to introduce an exciting new series, The Lightkeepers, which will launch in February 2016.  In Random Acts, the series prequel, we meet Detective Micki Dee Dare, a reformed southern belle turned kick ass cop, who must uncover the link between a series of bizarre and seemingly random murders in New Orleans. Her fans will be glad to know that Stacy Killian and members of the Malone clan will make appearances too.

“The cool thing is, I’m using my blessings to give back,” Spindler says. “That’s important. And in the process I might find a few new readers.”

Jo Robertson contributed Without Malice, the first book in an all-new series.  She says she loved getting to know never-before-seen characters, but none of the other SWEET DREAMS authors was new to her.

“I was completely honored,” she says of being asked to contribute. “Not only does the project fill a much-needed role in diabetes research, it’s a pleasure to be counted among such talented writers.”

The stories are unique, but when asked if it was hard to surrender a full-length work for a charity the authors responded with one voice.

As Cynthia Eden said, “Actually, I didn’t think of it as ‘surrendering’ the tale.  I wrote this story hoping that it could be used to help others. I am so glad that the proceeds will go to diabetes research because several of my family members are diabetic. I want to help them—I want to help as many people out there as I can. So it wasn’t ‘surrendering’ to me—it was more like I was just doing my part in the fight.” 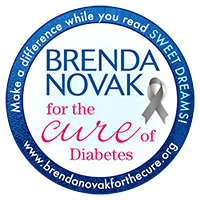 Eden invites readers to enter a world of darkness and obsession in her new romantic suspense tale, Until Death.

Allison Brennan also presents her fans with new characters in the anthology. Well, sort of.

“Aim to Kill is taken from the second manuscript I wrote—a book that will never see the light of day,” Brennan says. “But the premise was good, and I loved my heroine. Unfortunately, the story fell apart and when I originally wrote it I didn’t have the skill or insight to fix it. When Brenda asked me to write something, I thought about this story—and knew that I could make it work.”

She added Matt Elliott to the mix, the D.A. of Sacramento County who has been in several of her books. When disgraced former cop Alex Morgan is shot saving the life of California’s Lieutenant Governor, she doesn’t expect to be caught in the middle of a deadly conspiracy, an FBI sting, an old rivalry … and cold-blooded murder. Aim to Kill takes off from there.

The list of great stories in SWEET DREAMS goes on and on! From J. T. Ellison comes the long awaited prequel to her Taylor Jackson series. Crossed, the story of a madman trying to create his own end-of-days apocalypse, introduces Lieutenant Taylor Jackson to the young, troubled FBI profiler Dr. John Baldwin.

J. J. Graves and Jack Lawson investigate a ritualistic murder while on their honeymoon in Dirty Deeds by Liliana Hart.

From Alex Kava comes Before Evil, the prequel readers have been waiting for, and the case that destined Special Agent Maggie O’Dell to a career of chasing killers.

One bonding trip to Vegas, and Sin City will never be the same after Turn the Tables, the prequel to the Kathleen Turner Series by Tiffany Snow.

And we must not overlook Brenda Novak’s own contribution, Hanover House. It features Evelyn Talbott, a psychiatrist who studies serial killers at a revolutionary new medical health center in remote Hilltop, Alaska. Evelyn’s determined to unlock the mysteries of the anti-social mind, even if it kills her—and being surrounded by men who feel no remorse means it just might.

The only bad news is that this history-making digital collection of all new novels and novellas by bestselling authors will only be available for two months. He or she who hesitates could miss an amazing literary opportunity. Luckily, SWEET DREAMS is available pretty much everywhere e-books are sold, including Amazon, Barnes and Noble, Apple, Kobo and Google Play.

Don’t miss your chance to make a difference while reading thirteen wonderful stories from some of the best thriller writers in the industry.