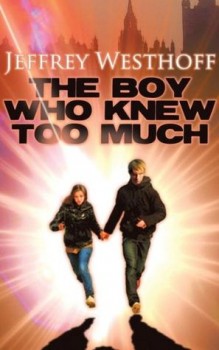 Many of us who love reading thrillers started reading them in our teen years if not sooner. Jeffrey Westhoff was one of those readers and with the publication of THE BOY WHO KNEW TOO MUCH, has written a book he would have wanted to read back then.

So what started a newspaper feature writer on the path to write a young adult novel? It began with a misheard question.

Westhoff acted on the idea right away. As he was driving home he remembered the man he saw in Lucerne while on a trip to Europe as a teenager. He was absolutely certain the man was a spy. Westhoff posed a question to himself: “What if I came across that man dying in an alley five minutes later, mortally wounded by an enemy agent?” The book spun off from that question.

In brief, while on a school trip to Europe, Milwaukee teenager Brian Parker hopes for a taste of the glamor and excitement of his favorite spy novels. What he didn’t realize was that he would get more then he bargained for. Stumbling across a dying spy catapults Brian into a desperate chase across the continent. He faces a deadly path but reading all those spy novels has taught him a few tricks; and it just might save his life.

On Westhoff’s website, he said, “When I started THE BOY WHO KNEW TOO MUCH, I wanted my hero [Brian Parker] to be a teenage connoisseur of spy novels who falls into an actual espionage plot while on a trip to Europe. He would use his knowledge of spy fiction to stay one step ahead of the bad guys.

Westhoff believed it would be “more fun to invent clever escape ploys for Brian and then say he read them in a book. At one point I realized that if Brian was going to refer to these books, I had to come up with a set of titles, know their characters, and have a vague idea of what happens in each book.” Using Kingsley Amis’ chart for the Ian Fleming books as an example, Westhoff created a similar chart for his Foster Blake books.

Westhoff did a ton of research for THE BOY WHO KNEW TOO MUCH. Memories of his trip were augmented by travel guides and maps. Toulouse and the Pyrenees required even more research since he had never been to either place. Additional research was spent to determine the correct weaponry and to answer the dozens of smaller questions that had to be answered.

“When I started researching the book, I realized library resources would help me learn about weapons system and train schedules and geography and the European tech scene, but no written source would tell me what it was like to be a sixteen-year-old girl in Toulouse, France.”

Through the Internet, Westhoff was able to connect with a young lady who shared what her life was like. He decided to use her obsession with Pink Floyd, but changed the name to the Ramones. “I figured giving her an affinity for an American punk band might make her warm a little sooner to the desperate American boy who turned up on her doorstep. I listened to a lot of Ramones while writing about Larissa. That was fun.”

While he might not have known a great deal about being a teenager in Europe, Westhoff knew enough to reject the advice “use short words” when writing for a younger audience. “The moment you question your reader’s intelligence is the moment you start insulting them,” he said. He added that the conversational writing style he developed as a film critic served him well in writing THE BOY WHO KNEW TOO MUCH.

“I was thirteen when I started reading Ian Fleming, so I assumed anyone interested in my book would be at that reading level. I treated THE BOY WHO KNEW TOO MUCH as a spy thriller that happened to have a fifteen-year-old hero. I did make allowances: There would be no sex and the violence wouldn’t be extreme. Otherwise I treated it as the spy novel I wish I had read when I was Brian’s age.”

What’s next for Brian Parker? “I originally considered THE BOY WHO KNEW TOO MUCH a standalone story. Writing a sequel opens up the Die Hard 2 question: How can the same thing happen to the same kid? But everyone who has read the book has asked about a sequel, particularly my publisher. The trick is reuniting the key characters. I think I have worked out the how, but not the why.

“In the meantime I am working on a new book, one I believe could launch a series. It is another spy story, but aimed at younger readers.

“I have also written a short spy story called Sidetracked that will appear in a YA anthology called Young Adventurers: Heroes, Explorers & Swashbucklers this fall. My story features a teenage girl and takes place during the Cold War.”

Westhoff dedicated THE BOY WHO KNEW TOO MUCH to Ian Fleming, Elleston Trevor (AKA Adam Hall), and Robert Louis Stevenson, each of whom was a strong inspiration for the book.

“I have written a Valentine to my teenage years when I voraciously read one spy novel after another and daydreamed about being a spy. Although the book is classified as YA, I believe it will also appeal to middle-aged James Bond fans. After all it was written by one.”

Jeffrey Westhoff has served as a film critic, feature writer, reporter, and copy editor in his career as a journalist. Jeffrey wrote his first novel, The Boy Who Knew Too Much, while working as a freelance writer. He was a film critic for more than 25 years. During that time he met or interviewed five of the six actors to play James Bond (all except Sean Connery). Pierce Brosnan once wished him a happy birthday. He has contributed to RogerEbert.com and also wrote book reviews for the Chicago Sun-Times.