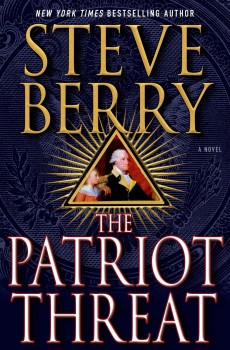 It’s Americans’ favorite time of year: tax season. With a tax code at tens of thousands of pages and an entire industry built up around helping ordinary citizens figure out exactly how much they owe, paying income tax has been among our most maligned of patriotic duties for nearly a century.

But what if federal income tax is, in fact, illegal?

Such is the bold question at the heart of Steve Berry’s latest thriller, THE PATRIOT THREAT. Once again, series hero Cotton Malone undertakes a globetrotting adventure to uncover the truth behind an explosive historical secret.

The government of the United States draws ninety-one percent of its total revenue from personal and corporate income tax. The tax codes that allow the government to levy the tax are built upon the 16th Amendment to the Constitution, but what if that amendment was never properly ratified? And what if proof of that failure fell into enemy hands? THE PATRIOT THREAT offers just such a scenario, built—as with all Steve Berry adventures—upon real, but little-known historical facts. Discrepancies in the amendment’s wording and cryptic warnings from the Secretary of State who presided over the process in 1913 could point to as many as twelve states’ ratifications being void, nullifying the amendment, eliminating the government’s ability to collect income tax, and bankrupting the country in one fell swoop.

When an exiled member of the North Korean elite, Kim Yong Jin, stumbles across documents that could destroy the United States, he sees his opportunity to win back his place in power. And unlike most of characters throughout his career, Berry loosely based Kim after the real deposed heir to the North Korean throne—Kim Jong Il’s older brother and political exile, Kim Jong-nam. The fascinating real-life scenario leading to his exile gives the antagonist a plausible and strong motivation for his actions throughout the story. Lucky for America that Cotton Malone is on the same Mediterranean cruise as Kim. Backed by Magellan Billet agent Luke Daniels and director Stephanie Nelle, Malone must stay a step ahead of Kim and ferret out some hidden truths, long buried in the past.

Treasury agent Isabella Shafer is a new character helping out, potentially filling a void left by Cassiopeia Vitt (but not to worry, Berry says, Cassiopeia will return). Kim’s daughter—Hana Sun—is another character Berry says he enjoyed writing, a smart yet conflicted young woman who proves an interesting dynamic in the tale. Her presence also allowed Berry to examine the awful North Korean death camps, where 200,000 people are currently confined.

Berry’s books are known for keeping a breakneck pace, but this one is his fastest ever, the entire adventure taking place in twenty-three hours. With locations spanning from Venice to Croatia to Washington, D.C., Malone and the gang have their work cut out for them. The history is equally fascinating, as is par for the course with Berry. In addition to the ratification of the 16th Amendment, the mystery delves into the fierce rivalry between three-time Secretary of the Treasury Andrew Mellon and President Franklin Delano Roosevelt, as well as Haym Solomon, a little-known financier of the American Revolution to whose family may still be owed more than $300,000,000 (which is true). There’s also some fascinating secrets about the one-dollar bill and the symbolism of a painting that hangs in the National Gallery of Art (both in the book and in real life).

As with all of Steve Berry’s tales, they are not only well researched in the book department, but also when it comes to on-site research. Berry says that he may have traveled more for this one than any of his previous adventures. Not only did he sail on the same cruise that Malone, Luke, and Kim are on, but he also made several trips to the National Gallery of Art in Washington, D.C., as well as to the FDR Presidential Library in Hyde Park, New York.

Cotton’s next adventure will be out in Spring 2016. The 14th Colony will explore a dangerous hole in the 20th Amendment, a deadly Cold War mystery, and the secret of what should have been the 14th colony. It doesn’t appear that Berry is letting off the gas anytime soon.

But to get to 2016, Cotton has to solve this year’s adventure first. Can the Magellan Billet unravel Andrew Mellon’s riddles to uncover the truth of the 16th Amendment and prevent bankrupting the country? And when Malone actually discovers the truth, what will he do with that potentially explosive information?

THE PATRIOT THREAT has just been released. Grab your copy and discover what secrets are hiding in the IRS’s closet. 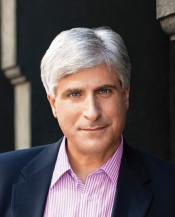 Steve Berry is the New York Times and #1 internationally bestselling author of The Patriot Threat, The Lincoln Myth, The King’s Deception, The Columbus Affair, The Jefferson Key, The Emperor’s Tomb, The Paris Vendetta, The Charlemagne Pursuit, The Venetian Betrayal, The Alexandria Link, The Templar Legacy, The Third Secret, The Romanov Prophecy, and The Amber Room. His books have been translated into 40 languages with 19,000,000 copies in 51 countries. They consistently appear in the top echelon of The New York Times, USA Today, and Indie bestseller lists.

History lies at the heart of every Steve Berry novel. It’s his passion, one he shares with his wife, Elizabeth, which led them to create History Matters, a foundation dedicated to historic preservation. Since 2009 Steve and Elizabeth have crossed the country to save endangered historic treasures, raising money via lectures, receptions, galas, luncheons, dinners and their popular writers workshops. To date, over 2,500 students have attended those workshops. In 2012 and 2013 Steve’s devotion to historic preservation was recognized by the American Library Association, which named Steve it’s spokesperson for National Preservation Week. Among his other honors is the Royden B. Davis Distinguished Author Award; the 2013 Barnes & Noble Writers for Writers Award given by Poets & Writers; the 2013 Anne Frank Human Writes Award; and the Silver Bullet, bestowed in 2013 by International Thriller Writers for his philanthropic work. A 2010 NPR survey named The Templar Legacy one of the top 100 thrillers ever written.

Steve was born and raised in Georgia, graduating from the Walter F. George School of Law at Mercer University. He was a trial lawyer for 30 years and held elective office for 14 of those years. He is a founding member of International Thriller Writers—a group of more than 2,600 thriller writers from around the world—and served three years as its co-president.

To learn more about Steve, please visit his website.