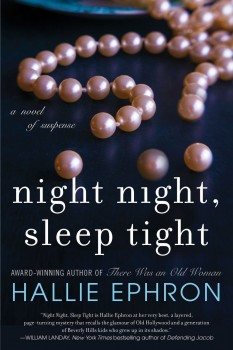 When Hallie Ephron was ten years old, living in Beverly Hills with her screenwriter parents and three sisters, an extraordinary event in her own community seized her imagination: Cheryl Crane, the 14-year-old daughter of Lana Turner, stabbed her mother’s lover, Johnny Stompanato, to death.

Young Hallie devoured all the information she could find about the case—“My parents never censored our reading; they just encouraged us to read and ask questions,” she said in a recent interview—and decades later it became the starting point for NIGHT NIGHT, SLEEP TIGHT, a thriller coming out this month.

NIGHT NIGHT, set in 1986, isn’t a retelling of the Cheryl Crane story, but a similar murder figures prominently in the background of main character Deirdre Unger. When Deirdre arrives in Beverly Hills to help her father sell his dilapidated house, she finds him dead in the swimming pool. At first, his death appears accidental, but soon the police are calling it murder—and Deirdre is a prime suspect. In search of the truth, Deirdre follows threads that lead back to 1958, when her best friend, Joelen Nichol, confessed to killing her movie-star mother’s boyfriend. Deirdre was in the Nichol house that night, and suffered a personal tragedy in the aftermath of the murder. The more she digs into the past, the more she suspects those distant events are related to her screenwriter father’s death.

Library Journal called NIGHT NIGHT an “entertainingly suspenseful read with its mix of movie stars, scandal, gossip, and mystery.” Booklist praised the author’s vivid recreation of old Hollywood in a “fast-moving tale, with building suspense and the price of fame at its center,” and Kirkus Reviews described it as a “page-turner with juicy Hollywood insider details.”

Hallie emphasizes that she didn’t know Lana Turner and her daughter, yet the story had a strong effect on her. “Of course, I wasn’t mature enough to fully grasp it, [but] I was in awe of Cheryl Crane. I thought she was courageous, heroic even, to take on a bully to protect her mother. And then, of course, she paid the price. Imagine, after that every person she met would know the story and what she’d done. She sacrificed her privacy and anonymity, precious commodities even in Hollywood where fame is so highly prized.”

The Hollywood era in which Hallie set the novel is one she knew well. “I grew up there in the 50s and 60s and went back from time to time. I saw the impact of the collapse of the studio system—my parents were screenwriters at 20th Century Fox and overnight they were out of work. By the 80s most of the studio had been bulldozed and turned into Century City. So it’s an interesting place and time period to set a story.”

NIGHT NIGHT wasn’t her first attempt to capture her childhood in fiction. “The very first serious piece I ever wrote was about growing up in Beverly Hills,” she recalls. “Of course it was autobiographical—isn’t everyone’s first writing effort? This happened and then this happened and then… I had a lot to learn about narrative arc, no idea what viewpoint was all about. When I came to write this new book I cannibalized some of the rich details that I’d put in that unfinished manuscript, and I added the entirely fictional plot of a Hollywood murder.”

When she turned again to writing about Hollywood, she embellished her fictional plot with many autobiographical details. “My parents were screenwriters, just like Deirdre Unger’s parents in the book. The story of Deirdre’s screenwriter father’s life—born in the Bronx, got thrown out of school, moved to NYC and got a job as a stage manager—that’s all my dad, Henry Ephron. Though he was a tennis player, not a swimmer.”

Her standalones, the Peter Zak books, and NIGHT NIGHT may seem to belong to different subgenres, but Hallie sees a common thread running through all her crime fiction. “I seem to return, over and over again, to the question of trust, and how can you know who to trust. It’s there again in NIGHT NIGHT. And my main characters in the standalones are women, ordinary women dealing with the usual craziness of families and life. I like to think I’m writing what Sarah Weinstein calls domestic suspense.”

Many novelists say they can’t read other people’s fiction while writing because it influences their own work, but as a reviewer, Hallie is always reading someone else’s book. Shaking off the mood of a novel she’s reviewing and getting back into her own writing is a problem “only when I’m reading a really fabulous book. And what a pleasure it is when it happens.”  She finds that reviewing frequently benefits her own books. “It’s always so much easier to see flaws in other people’s work, so reading with a critical eye helps me see the flaws in my own writing.”

What kind of book can we expect from Hallie Ephron next? She’s not sure. “I’ve just started a novel. I know it’s about dolls and sleep and loss. Beyond that, every day is a surprise.” 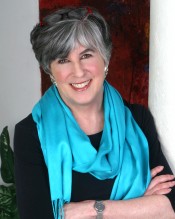 Hallie Ephron writes suspense novels she hopes keep readers up nights. A three-time finalist for the Mary Higgins Clark award, her new novel, Night Night, Sleep Tight (Wm. Morrow, 3/24/2015), is set in Beverly Hills in the 1960s and 1980s, where Ms. Ephron grew up. Her parents were screenwriters Henry and Phoebe Ephron who wrote such classics as Desk Set and Carousel. She is the third of four writing Ephron sisters (Nora, Delia, Hallie, and Amy.)

Ms. Ephron made a splash with her first suspense standalone, Never Tell a Lie. In a starred review, Publishers Weekly called it “stunning” and a “deliciously creepy tale of obsession.” USA Today: “You can imagine Hitchcock curling up with this one.” It was adapted for film as “And Baby Will Fall” for the Lifetime Movie Network.

She followed up with Come and Find Me, a story about a reclusive woman who thinks she’s found safety retreating behind locked doors and living on the Internet. When her sister disappears she has to brave the real world.

Her third suspense standalone, There Was an Old Woman, garnered rave reviews. Wet in the Bronx. It’s a story of trust and betrayal, deception and madness. In it, a young woman and a very old woman connect across generations in spite of, or perhaps because, they are not related. Washington Post book reviewer Maureen Corrigan: “For those who love Gotham and abhor gore, There Was an Old Woman is the perfect thriller lite.” New York Times, bestselling author Tess Gerritsen: “An absolute must read. I devoured this in one ravenous gulp.”

All three of Ms. Ephron’s suspense standalones were honored as finalists for the Mary Higgins Clark Award. Sarah Weinman named There Was an old Woman one of her “Top 10? for 2013.