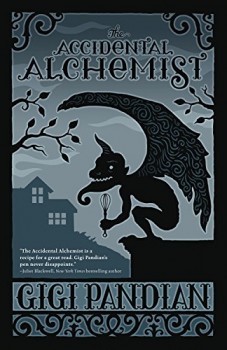 This urban fantasy thriller is based in Portland, Oregon­, an appropriately fashionable setting for the unusual and strange. And sure enough, after only a few pages, we soon learn this is going to be a tale that embraces the extraordinary. The protagonist, Zoe, seemed as surprised as I was to discover that the other main character was a diminutive French-speaking gargoyle with a penchant for fine dining. Next we find that Zoe herself is not quite the ordinary girl she first appears to be, but is actually significantly older, providing a rich backdrop for the story’s past and present.

As the plot unfolds, we follow the exploits and adventures of this very unusual pair of sleuths, who lead us, hand in tiny stone hand, on a very curious journey indeed. The narrative maintains a relatively light atmosphere amongst shades of darker things and sinister goings-on, but avoids fixating on the grim to conjure an enjoyable escapade.

I interviewed Gigi to gain an insight into the book’s creation and also for a sneak a peek into her diary of future plans.

What kind of readers do you imagine will most enjoy THE ACCIDENTAL ALCHEMIST?

Readers who want some humor and magic along with a “twisty-turny” mystery would enjoy the hijinks of a stone gargoyle mistakenly brought to life by a French stage magician, and an alchemist who accidentally discovered the Elixir of Life over three hundred years ago.

I began toying with the idea of a stage magician who doesn’t believe in mystical magic, and whose theatrical grandstanding turns out to be real magic that brings a stone creature to life. Parallel to the alchemy that surprised the magician is the journey of a woman who’s an herbalist, but only after she’s accused of witchcraft does she learn that alchemy is real. Though I explore the theme of accidental transformations, the book is also a lighthearted romp through Portland, Oregon.

I enjoyed the character Dorian. I am sure others will too. What made you decide he should be a gargoyle?

I’ve been fascinated by gargoyles since I was a kid, ever since my first trip to Europe when I was ten years old and tagging along with my professor mom on a summer research trip. I think of gargoyles as representing all things mysterious, and I seek them out in every new destination I visit. Long before I conceived of this book, I gathered my photos on the Gargoyle Girl blog. New York City is one of my favorite gargoyle destinations, so I’m eagerly awaiting going on a gargoyle walk when I’m in town next summer for my first Thrillerfest!

I’m a mystery writer, not a science fiction or fantasy writer, but several years ago I wrote a mystery short story featuring a gargoyle that observed a baffling crime. I never thought the story would become a full-length novel—until I realized that there could be a story in finding out how a gargoyle might be brought to life in a way that was more steeped in the traditions of mystery rather than sci-fi. I’ve always loved mysteries involving stage magicians who unmask false magic—such as Jeffery Deaver’s The Vanished Man, Daniel Stashower’s Harry Houdini mysteries, and Clayton Rawson’s Merlini stories—that’s where the idea came from for a rational magician to stumble across a small fragment of his repertoire that proved to be true alchemical magic.

As you have already mentioned, the story draws upon various arts and crafts, such as herbalism, alchemy, cookery, and even woodblock printing. Do any of these hold a special personal interest?

Nearly four years ago, shortly after my thirty-sixth birthday, I was diagnosed with invasive breast cancer. That experience forced me to reexamine my whole life. I was a city-dweller who didn’t know how to cook, and I was a mystery writer hobbyist in my spare time. I realized I didn’t want to waste my potentially short life. While going through chemotherapy, I found myself thinking about alchemy and the Elixir of Life.

Once I was well enough, I threw myself into learning how to cook the delicious versions of the healthy foods now necessary for me to eat. Learning to transform simple ingredients into something far greater than their parts became one of my passions, and I found myself exploring the broader theme of transformation in a draft of THE ACCIDENTAL ALCHEMIST. And yes, I wrote a draft of the book while undergoing cancer treatments, because I’d decided I was no longer a hobbyist. Writing is a time-consuming job, but it’s also the most fun I’ve ever had. Living with a high risk of recurrence, I let my characters work out my angst for me.

So although THE ACCIDENTAL ALCHEMIST is concerned with the arcane, it was inspired by real life incidents. Is this also true of your stories in general?

All of my novels to date have been inspired by real life experiences. My first series, the Jaya Jones Treasure Hunt mystery series, is about a female history professor in San Francisco who finds historic treasures across the world that are related to India’s colonial past. In real life, my dad was born and raised in India, and my mom is American. Both of them are cultural anthropologists, and I grew up traveling around the world with them.

My family and I never uncovered any historic treasures (at least not of the magnitude of the ones in my books), but those childhood experiences definitely inspired me to write those globetrotting adventures. I’m continuing to write that treasure hunt series in addition to the Accidental Alchemist mysteries. Those treasure hunts are too damn fun to give up. The next book in that series, Quicksand, comes out in the spring of 2015, and is based on an experience I had at the Louvre in Paris during an art heist.

I write short stories, too, but my short fiction isn’t based on real life experiences quite as closely. I tend to write locked-room short stories—those impossible crimes where the main mystery is how the crime was committed. My short stories are inspired by Golden Age of detective fiction puzzle plots.

Are we to expect more gargoyles or other fantastic characters in future books?

THE ACCIDENTAL ALCHEMIST is the first in a series, so there will be more books featuring Dorian the gargoyle. I pretend I’m an outliner, because I always have a roadmap plotted when I start writing. But in truth, once I sit down and begin to write, my characters take over. Therefore I’m not quite sure where the series will go. But I’m enjoying the ride getting there. 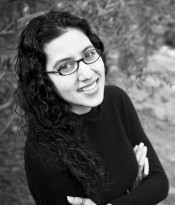 Gigi Pandian is the USA Today bestselling author of the Jaya Jones Treasure Hunt Mysteries (Artifact, Pirate Vishnu, and the forthcoming Quicksand) set in Scotland, India, and France, and a new series beginning with The Accidental Alchemist. Gigi’s debut mystery was awarded the Malice Domestic Grant and named a “Best of 2012” debut by Suspense Magazine. She loves writing locked room mystery short stories, such as her Agatha and Macavity-nominated “The Hindi Houdini.”