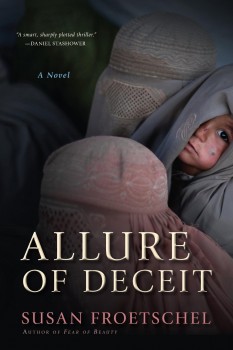 Susan Froetschel’s 2013 novel Fear of Beauty and its just-released sequel, ALLURE OF DECEIT, mark a strong departure from her previous mysteries, leaving more conventional settings behind and immersing readers in the daily life of a village in Afghanistan. Fear of Beauty, the story of an illiterate Afghani woman who must circumvent the rules of her society to learn the truth about her young son’s death, received numerous honors, including the Youth Literature Award from the Middle East Outreach Council, a best mystery-suspense award from the Military Writers Society of America, and a nomination for the Mary Higgins Clark Award.

ALLURE OF DECEIT continues the story of these Afghan characters. After a tech entrepreneur dies in a terrorist attack, organizations in developing countries scramble to grab the vast fortune that will be distributed through his posthumously-created foundation. The farming village of Laashekoh, Afghanistan, is chosen by a health team promoting reproductive rights as a recipient of the foundation’s largesse—although the local people feel no need for this outside interference. When a group of aid workers visiting the village goes missing, foul play is suspected.

Fraud, murder, and culture clashes fuel the conflict, but Froetschel describes ALLURE OF DECEIT as, above all, “a family saga” centered on the husband and wife who appear in both novels.

Would you tell us more about ALLURE OF DECEIT and its characters? Do many of the characters from Fear of Beauty make return appearances?

Fear of Beauty is the story of an illiterate woman, Sofi, who is desperate to learn the truth about her son’s death, and ALLURE OF DECEIT is the story of her husband, Parsaa, and his efforts to protect the village of Laashekoh, isolated and rural with a micro-climate ideal for farming, from change. Parsaa is a village leader who is relieved that U.S. troops have left Afghanistan, but must still contend with charities that try to deliver unwanted assistance. His son, Siddiq, who has a mind of his own, balks at leaving the village to attend school, and questions a village practice of shaming entire families for crimes committed by any one family member. A director of a huge charitable foundation manipulates funding and programs to figure out why her son was killed. Parsaa secretly visits a childhood friend for help understanding the persistence of aid workers, but the friend has ulterior motives.

Other characters in both books include family friends, and Leila, who is serving a prison sentence and despises Parsaa for exposing her role in a child-trafficking ring. She manipulates foreign charities, convincing them she is a victim of male oppression—from Parsaa.

The characters—the inhabitants of a remote village and foreign aid workers—represent a clash of cultures. All the characters lie to hide their true goals.

How did your interest in Afghanistan develop? What is it about this particular country and its culture that fascinates you?

I’ve been interested since the late 1970s when a good friend described his travels there and insisted it was the most hospitable land he had ever visited. By the late 1990s, reports emerged about the Taliban taking brutal control and public executions carried out by citizens who heaved stones at the accused, sometimes their own loved ones. It was a struggle to reconcile the accounts. After the 9/11 attacks and the U.S.-led invasion of Afghanistan, I began working for YaleGlobal, an online magazine, writing and editing about globalization, including the war.

I could not imagine how communities function with such high illiteracy rates, or how a country once described as so hospitable could withdraw so much from the world. Years later, I came upon a Reuters report that estimated that Afghanistan had about 75,000 members of the Taliban, most said to be involved for economic reasons—that’s in a country of 30 million people.

A few who are willing to be brutal can control many—a terrifying thought. The setting is thrilling and so too are the challenges confronting ordinary families. I wanted to tell stories of people who resist religious bullying and other social pressures

You write with assurance about the most intimate details of everyday life among ordinary Afghanis. How do you research your novels? Have you felt any trepidation in writing about lives so different from your own?

An idea popped in my head for a scene that eventually made it into Fear of Beauty, and I knew the plot was strong. Still I hesitated and wondered if I was the right person who could carry out the research and if my writing would do justice to these courageous characters. I went to Yale’s Sterling Library and paged through old picture books of Afghanistan and read about the history, the nomads, the beauty. And I followed the news and spoke to friends and refugees who grew up in south and central Asia. All I knew was that I had to try.

Some of your Afghani characters are surprised and insulted to be viewed as objects of western charity. Do you believe many westerners have a fundamental misunderstanding of the people in that region, what they value, and what they consider a good life?

We can have fundamental misunderstandings of the people who live next door or the other side of town. That said, westerners simply do not share the same set of assumptions. Before we can talk with others who are not like us or before we can help them, we should uncover the assumptions, determine which we share and which we do not. One of my favorite parts of Fear of Beauty is when an aid worker describes her home in Virginia as open and free, and the Afghan woman responds, “It’s that way here, too”— because for her, freedom means hard work and access to basics like shelter, food, and water. Part of my intention with these books is to highlight the privileges, comforts, and opportunities that so many of us overlook or take for granted.

Why did you choose the mystery/suspense genre to write about Afghanistan? Are you conscious of walking a fine line between giving readers enlightening information about a different culture and telling a good story?

As a reader, I relish strong, realistic, complicated plots with suspense, and so those are the stories I strive to tell. Yet writing about another culture or complex institution requires detailed explanations. You are so right that research cannot overwhelm the plot. Every detail should contribute to the plot and characters’ motivation and the tone. If it’s not adding to conflict, then those details should be stripped away. And that’s easy to do when writing from the point of view of characters who have not had the benefit of formal education. The readers know much more than the characters.

Were you surprised that Fear of Beauty was so well received in the U.S.? Have you received any particularly memorable responses from readers?

I was grateful that readers appreciated the research and the perspective of a woman whose country is at war.

The book certainly touches some readers. One woman wrote and said the book convinced her to leave her husband. She realized that that her marriage was not a true partnership. Families must juggle many priorities, and marriages suffer when there is a power imbalance and focus on the priorities of one individual.

The novels are optimistic, not bleak, with characters who think about what they want and are determined to achieve their goals.

What’s next for you? Do you plan to continue exploring the western relationship with Afghanistan?

Yes, there is at least one more novel after ALLURE OF DECEIT, and that one will focus on security. 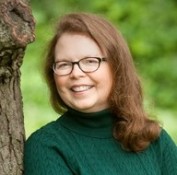 Susan Froetschel (East Lansing, MI) is the author of four previous novels—FEAR OF BEAUTY (also set in the same village of Afghanistan), ALASKA GRAY, INTERRUPTIONS, and ROYAL ESCAPE. In addition, she has written articles for the New York Times, the Christian Science Monitor, Barron’s, and many other publications. She has taught writing and journalism at Yale University and Southern Connecticut State University, and she currently writes and edits for YaleGlobal Online, based at Yale University’s Macmillan Center.