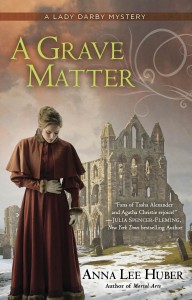 When it comes to historical suspense, there are authors who can effortlessly unearth the appeal of an era through beautiful locations and perfectly written characters. Everything from cultural points and societal issues to accents and wardrobes come together to make the reader feel as if he or she is standing beside the characters, perhaps looking into an empty grave while the night wind blows through the cracks of an old abbey, alerting everyone to the ghosts that roam the landscape. Anna Lee Huber does just that with flawless precision in each of her Lady Darby mysteries. So flawlessly, in fact, that while providing a great read, Huber also gives the reader a portal where he or she can effortlessly travel back in time.

A GRAVE MATTER is the third tale of Lady Darby, first introduced in the amazing novel, THE ANATOMIST’S WIFE. This is a woman who not only had to face personal risk, but also rose to the occasion and ended up being both heroine and sleuth. In A GRAVE MATTER, released this month, Lady Darby deals with her ever-blossoming relationship with a man named Gage, and solves a case of body snatching where the motive turns out to be far more complex than anyone will believe.

From the very first tale, Lady Darby was embraced by readers because of her strength and the passion she held for all areas of life; so it will come as no surprise that her creator shares that passion for everything from travel to music to Star Wars to an imaginative writing career that will expand in many directions, as she takes on new genres and characters in the coming years.

You write history so well—covering every aspect of a chosen time period. Are there other genres you wish to explore?

I adore Gothic suspense novels, especially anything by Mary Stewart, and I’m actually in the midst of writing one myself. It’s set during the Regency period, so still historical, but a definite departure from the Lady Darby series. I also have an idea for a contemporary mystery series with a bit of a paranormal twist. I haven’t written anything contemporary in years, but I’m hoping I can find time soon to try my hand at it.

Lady Darby seems so real. She is both strong and courageous, dealing with everything that her husband’s shame brought down upon her shoulders while living in an era where society certainly ostracized people for mistakes. Is she based on a specific person? How about the other characters?

Lady Darby is not consciously based on any one person, though I’m sure I’ve taken bits and pieces of her from people I know. On the one hand, she was very deliberately constructed, especially her back story, the skills she brings to investigations, and her awkwardness among society. But she also springs from some place in my subconscious I hadn’t even known was there. As soon as I started to write her story, her voice just flowed so easily through me. I’d never felt that ease with a character before. So I suppose a portion of her must be a part of who I am, or at least who I wish I could be.

As for my secondary characters, I never model them on a real person in entirety. My mind just doesn’t work that way. But I do steal parts of people, particularly their quirks and mannerisms. I often think it’s those nuances that can make a character really come to life—in my mind, as well as (hopefully) on the page.

You provide intricate details for the scenery and locations. Being from Ohio, I know you’ve traveled, but how do you make it feel as if your books were written by a European sitting in a café in the seventeenth or eighteenth century?

I believe the key to writing settings well is to always be conscious of who is describing it. You have to filter the scene through the eyes of your narrator, which in the case of the Lady Darby books is always Lady Darby. What would she notice walking into a room? What would she feel? What does it tell her about the person who owns it? I also believe that less is so often more. You don’t need to describe the entire contents of a room or every square inch of a property. Just give us the highlights, the things that make the strongest impression on the narrator. If your narrator feels firmly set in the scene then your reader will, too.

The Nun of Dryburgh, the First-Footer on New Year’s Eve in Scotland, and other myths and legends that you touch upon are amazingly well researched. Have you always been a fan of history? Are there other time periods that you wish to focus on one day?

I find history fascinating. Next to music, it was always my favorite subject in school. I love uncovering strange and obscure facts and folklore that really make a time and place come alive. I tend to gravitate towards more modern history—eighteenth century and later—but I am interested in the time period when Rome was conquering the Celts. The first novel I attempted—which shall never see the light of day—was actually set in southern Germany during the first century a.d. As far as more modern history, I’m particularly intrigued by the Jacobite Rebellions; the American Revolution; the Regency Period, including the Napoleonic Wars; and World War I. Who knows? I might write something set in all those time periods someday.

It is obvious that there is a Jane Austen–like tone to your novels. Is that particular wordsmith one of your favorites? And are there others you would call out as being icons of yours?

Definitely! Jane Austen is on my list of Top Ten authors, probably Top Five. Other authors who have strongly influenced me, include the Brontes, Mary Stewart, Georgette Heyer, Deanna Raybourn, Susanna Kearsley, Diana Gabaldon, and all the authors who wrote as Carolyn Keene.

Many authors rely on a furry friend in the home to be their muse of sorts. When it comes to your tabby cat, Pita, does she help with your stories?

Pita is my writing buddy! Either providing company, inspiration, or comfort when the story isn’t flowing, or a much-needed distraction. When she’s decided it’s time for me to take a break—she’s there!

Lady Darby’s tales have each been unique as far as the crimes are concerned, but the emotional journey of your main character has truly been something to watch. Do you have an end in sight for Kiera Darby, perhaps a happy one should she choose not to be alone one day?

I admit I don’t have an ultimate end in mind for Kiera’s story. I do have the series loosely plotted out as far as eight or nine books, but even that is open-ended, leaving room for further adventures. It’s important to me that Kiera’s character always grows and evolves, and I think in the same sense her “happiness” will grow and evolve, just as it does in all of our lives. But rest assured, whenever her story does conclude, it will be happily. I simply can’t end it any other way.

A question I ask in all interviews because readers really love to know the answer is, If you could have lunch with any author, alive or dead, who would it be, and why?

Mary Stewart. Simply put, she was brilliant. I would love to pick her brain about how she went about crafting her stories; but mostly, I think I would just enjoy listening to her tell stories about the places she traveled and the destinations she used in her creations.

You are a huge fan of the smell of the printed page, so could you tell readers what your take is on ebooks, as well as the increase in self-publishing?

I enjoy that scent, especially from older books and leather tomes. It’s like a natural stimulant for the brain. However, I also read ebooks. For travel they’re especially convenient. I can take five hundred books with me instead of being forced to choose just two or three. I also just became a new mom, and it’s much easier to handle my digital reader while I feed my daughter than have to balance a book and flip pages. I would say my reading consists of seventy percent ebooks and thirty percent physical books. I find ebooks are often cheaper than the print versions, and I know in most cases the author is getting a bigger percentage of the sales, unless they’re steeply discounted. As far as I’m concerned it doesn’t matter how people read as long as they are doing it.

I’m an advocate of self-publishing, as long as it’s done professionally and with intention. It’s definitely a viable option for authors now, and enables them to keep more control over the process if they wish, and in some cases make more money. It certainly pays “light-speeds” more quickly than traditional publishers. Thus far, for my own reasons, I’ve chosen to go the traditional route, but I have friends who consciously chose to self-publish and it has worked out very well for them. I like knowing the option is out there should I ever wish to try it. I think it gives me more confidence to try new things in my writing.

What is the next step for Lady Darby?

In Book 4, which will be published in July 2015, Lady Darby is headed back to Edinburgh for the impending delivery of her sister Alana’s fourth child. She has begun to take on portrait commissions again, and when one of her subjects dies under shocking circumstances she’s compelled to investigate, with Gage’s assistance, of course.

On your website you mention the Star Wars world, growing up with light sabers and so on. So which do you like better, the originals or the three prequels? And what is your favorite character?

Definitely the original trilogy (now, numbers four to six). But I think Obi-wan is my favorite character, and he appears more in movies one through three. He’s such a complex character and plays such a pivotal role, though it’s often overlooked. There’s also so much we don’t know about him, so much that remains a mystery, at least in the movies. He intrigues me.