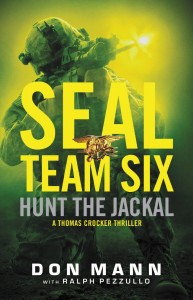 Ralph Pezzullo is a New York Times bestselling author and award-winning playwright and screenwriter. His numerous books have been published in more than twenty languages and include his acclaimed Seal Team Six series. This month, Pezzullo (with Don Mann) release the latest in the series, HUNT THE JACKAL, which promises to be the best one yet.

In HUNT THE JACKAL, a senator’s wife and teenage daughter are kidnapped and Thomas Crocker and SEAL Team Six are sent to Mexico’s lawless countryside, where federal agents protect instead of hunt down violent narcotics kingpins. The two women have been kidnapped by the Jackal, a drug lord drunk on power and influence. He also happens to be a self-styled modern Che Guevara, who has undergone plastic surgery to disguise his looks and justifies his brutal methods and Machiavellian drug empire with the politics of social revolution. The Jackal is as ruthless as he is colorful, and he must be stopped.

Pezzullo graciously agreed to answer some questions about the new book, his background, and his writing career.

In your newest and fourth SEAL Team Six novel, HUNT THE JACKAL, you send main character Thomas Crocker into perilous new territory hunting narcotic kingpins in Mexico. What challenges does he face there?

As soon as Crocker and his team of SEALs (known as Black Cell) enter Mexico they face a number of very dangerous challenges. The FBI/DEA team that is coordinating the rescue of Senator Clark’s wife and daughter sends them to a raid a compound in the Zapopan section of Guadalajara. Instead of finding the hostages, they’re ambushed by Mexican Federales with heavy weapons. Two SEALs are badly injured. When Crocker and his men limp back to the FBI safehouse, they find that five FBI and DEA officers they had been working with dead and decapitated. Now, Crocker has to improvise, he can trust the local police or military, and the clock is ticking.

Four books later, how do the events that Thomas goes through change him? And is it for better or for worse?

Crocker is an action/danger junkie. He’s also highly trained and intelligent and loves what he does. He also believes the SEAL saying that a goes, “the only easy day was yesterday.” So he expects challenges and almost invites them. As the books continue, he realizes that the action and danger are almost like a drug to him. He needs them to satisfy something deep inside him that involves questions of self-worth. His wife Holly, on the other hand, is losing patience with this life that has her husband leaving in the middle of the night on dangerous missions all over the world, and not knowing where he is and when he’ll come home.

You lived for three years in Bolivia during the time that Che Guevara was trying to build a guerrilla base in that country. How did your experiences there fit into writing HUNT THE JACKAL?

My experience growing up in Latin America has helped me understand the mindset of the romantic Che Guevara-style revolutionary. It’s easy to appreciate why poor Latin Americans feel exploited by Europeans and the United States. As the drug cartel leader in HUNT THE JACKAL explains, “Your unending greed has taken many forms—plundering natural resources; demanding cheap labor to toil in your mines, on your farms, and in your factories and assembly plants; consuming oil to run your cars and heat your homes; and procuring beautiful young women and narcotics to quiet the unease in your souls.” Those words could easily been said by Che himself.

HUNT THE JACKAL is set in Mexico’s lawless countryside, where federal agents protect instead of hunt down violent narcotics kingpins. You’ve also lived in Mexico. Can you share what you might have witnessed in Mexico that drove the location, and writing, of this book?

A great deal of my own experience has informed the book. First of all, I love Mexico. It’s a fascinating country with a deep soul and very interesting culture. Mexicans think differently from us. Life is cheap and they have a tradition of blood sacrifice that dates back to the Aztecs. Also, through my friends and contacts in the government, I’ve learned a lot about how the cartels operate and how their leaders think. I’ve tried to make the book as real to life as possible. I take pride in the fact that a couple of cartel experts who have read it, say that we have accomplished that.

In writing a special operations thriller series, do you find that you have to draw a fine line between accurately portraying how SEAL teams operate in detail without revealing information that could put real-life SEAL teams in danger?

All the books Don and I write together are reviewed by the CIA publication review board for precisely that reason. They want us to be careful about what we reveal. So, yes, we try to be as true to life as possible, and we have people making sure we don’t cross the line.

You’ve lived all over, from South America to Asia as the son of a father in the Foreign Service. Has any particular location had the most impact on what you write?

My father always chose hardship assignments because they were good for his career. They exposed me to a great deal of political upheaval and danger. We lived in Vietnam during the war, Bolivia during the days of Che Guevara, Colombia at the beginning of the drug wars, Guatemala as a right-wing government cleansed the country of left-wing guerrillas and their sympathizers, and Nicaragua right after the revolution. So it was an incredible preparation for becoming a writer. I guess living in Saigon, Vietnam made the strongest impression on me. It was such a beautiful, gentle country and we didn’t understand it. Very tragic.

You’ve co-written four SEAL Team Six novels now, as well as non-fiction work, with decorated Navy SEAL Team Six member Don Mann. How did you and Don team up and how did this partnership lead to the books you write together?

Don contacted me about five years ago. He told me that he had a long career as a SEAL and member of SEAL Team 6 and was interested in writing about it. He’s a great guy with an inspirational life story.

Besides fiction and non-fiction books, you have a background as a playwright and screenwriter writing for film, t.v., radio, and theatre. Which medium do you prefer to write in and why?

My favorite is probably theatre. I’ve written over a dozen plays that have been performed across the country and, even, overseas. But it’s almost impossible to make a living as a playwright. All of the mediums are interesting and present their own opportunities and challenges. In the end, I think of myself as a storyteller. Some stories are more suited to a particular medium than others.

Has the art of screenwriting fed into how you write fiction? What techniques translate over to your novel writing?

Screenwriting is a lot more difficult than people think it is, because it’s primarily visual. Like I said before I started in theatre, where everything is described and explored through dialogue. Dialogue is fascinating, because it allows you to reveal what someone in thinking and how they’re expressing it. Screenplays, because of their brevity, force the writer to be very disciplined in terms of setting a particular scene. They also have to move quickly and build tension from scene to scene. Hopefully, I’ve learned that.

You’ve written just about everything and lived all over the world, so yeah; you do have some stories to tell. So what’s up next?

My next book is a nonfiction account of a young CIA officer from Indiana, who learned Pashto, wore local Pashtun garb, called himself Zmarai and was able to penetrate deep into the Taliban and al-Qaeda. It’s a fascination and very personal story. Currently, I’m working on the next Hunt thriller, entitled HUNT THE FOX and set in Turkey and Syria.

Ralph Pezzullo is a New York Times bestselling author, and award-winning playwright and screenwriter. His books have been published in over twenty languages and include JAWBREAKER (with former CIA operative Gary Berntsen), INSIDE SEAL TEAM SIX (with Don Mann), THE WALK-IN, AT THE FALL OF SOMOZA, PLUNGING INTO HAITI (winner of the 2006 Douglas Dillon Prize for American Diplomacy), EVE MISSING, BLOOD OF MY BLOOD, MOST EVIL, and THE NAVY SEAL SURVIVAL HANDBOOK and the SEAL Team Six thrillers HUNT THE WOLF. HUNT THE SCORPION, HUNT THE FALCON, and the forthcoming HUNT THE JACKAL (also with Don Mann).