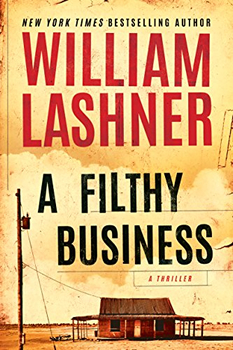 William Lashner, New York Times bestselling author of The Four Night Run, Guaranteed Heroes, and The Barkeep, is no stranger to darkness. Before retiring from law to write full-time, Lashner was a prosecutor with the Department of Justice in Washington, D.C., where no doubt his career funnelled into his writing. The Barkeep, nominated for an Edgar Award, was an Amazon and Digital Book World No. 1 bestseller, and Lashner’s Victor Carl legal thrillers have been translated into more than a dozen languages and sold across the globe.

In Lashner’s newest release, A FILTHY BUSINESS, we get a slice of the human degraded condition through Phil Kubiak—a henchman turned hero. This unique hero claims no empathetic edge but rather a heartless drive.

A lifetime ago, brutally efficient fixer Phil Kubiak coldly cleaned up the messes of shady clients from Miami to Las Vegas by any means necessary—short of murder. Now he’s one eye and one working leg short of the man he used to be, scarred beyond recognition, and with the feds and criminal organizations in hot pursuit. Throwing back sour beer in a dingy bar, Phil recounts the long story of his bitter life to the only person left to listen . . . Across the splintery table, a journalist in pursuit of a career-making interview has driven into the bowels of the desert, seeking not only an award-winning profile but also something more . . . something darker.

And Lashner definitely gives us darker in this twisted ride. His popular Victor Carl character exudes shades of gray, but Lashner dives deeper into the dark in A FILTHY BUSINESS with the crafting of Phil Kubiak, a further extreme of Carl’s morally ambiguous character. Creating a main character with a malignant psychological character is a gutsy move but Lashner’s skill lies in creating an unredeemable character that is also likeable.

“The key to the book is how Phil, with that malign psychology, ends up going from a henchman to hero,” Lashner says. “Every time I saw some true piece of human compassion roll into the prose, or a sweet emotion, or a nice piece of empathy, I ruthlessly cut it out. Chop, chop. And yet, I tried hard to make Phil a pleasant companion. It was important that the reader likes having a drink with him, likes hearing his story. His honesty, his consistency, his humor all work together to make him charming, which makes sense in the realm of the story.”

The Wall Street Journal lauds Lashner as being “both deadly serious and frequently hilarious,” and Lashner once again infuses humor as comic relief in Kubiak’s tale. So how did Lashner create a henchman with a sense of humor? “Jokes. I use jokes. And I imagine henchmen giving each other the business, which is fun. But again, humor is one of Phil’s techniques for gaining trust so he can use and abuse.”

Humor aside, Lashner uneasily discovered that in creating a complex character of dark and light, he faced himself in the mirror. “I meant to create in Phil Kubiak a dark character without any redeeming features other than a decent sense of humor and a discerning palate for Scotch. Sadly, as I got deeper into the story I began to see some striking, and uncomfortable, similarities between Phil and me. We all contain multitudes, or maybe I should say multi dudes, and one of my dudes is a heartless son of a bitch.  It was fun to let that dude run free for a while.”

Lashner admits to having a fascination with henchman as the throwaway pieces of action movies. “My God, how many henchman does John Wick obliterate and all we do is cheer? They show up on the screen for a second and a half only to be tossed off a roof, but I always wonder about their childhoods, their experiences, their hopes and dreams. A FILTHY BUSINESS could be considered my ode to the henchman.”

In creating a likeable henchman, a new kind of hero emerged with Kubiak, and one that Lashner quickly latched onto in the making. “I didn’t really plan to write Phil as dark as he now appears, but when I saw what he was becoming on the page I got really excited that I had found a new kind of hero character, at least for me. Watching him operate, while his confederates all fall apart because of their moral qualms, was quite fun. There’s a reason his alias is Dick Triplett.”

With a love for old pulp-fiction writers such as Dashiell Hammett, Raymond Chandler, E. Robert Howard, and Edgar Rice Burroughs, Lashner weaves his own tale rich with pulp fiction elements. One of his biggest influences for writing A FILTHY BUSINESS was The Fall, by Albert Camus. “I’m a Camus freak and I always thought his novel The Fall, which is just a guy talking in a bar, was really cool. That’s what I wanted this to be, some crazy story told by a guy in a bar, but I needed the moments in the bar to have their own story, too, and that’s where the reporter comes in. She has an agenda, as all reporters do, but as she listens to Phil’s story, it has an effect on her. I like to believe stories can change you, and I think Phil’s story does change her, though I’m not sure for the better.”

There is an episodic nature to Phil’s story, much like pulp fiction, as he first vies to become a henchman and then goes on his brutal missions, one after the other, before having a bonsai epiphany in New Orleans. Lashner marks the one distinction that sets A FILTHY BUSINESS apart from traditional pulp fiction. “The classic pulp characters, Conan, Tarzan, the Continental Op, all have hearts of gold. Phil has a heart of sludge.”

With Kubiak’s brutal past and scarred and disabled figure, Lashner plays this up. Stories are about change but Kubiak discovers in the course of the novel that he can’t ever truly change. “In a way, he embodies change, even though, emotionally and psychologically, he hasn’t changed at all,” Lashner explains. “The contradiction is disorienting, which is exactly what Phil wants as he tells the story.”

Lashner may have seen parts of Phil in himself, but will readers as well? “Like Phil says, when you look into someone else’s eyes, the only truth you see is your own, so I don’t think I’m alone in that.”

Kubiak’s situation is bleak, no doubt. He can’t change his past, he can’t change his personality, and he can’t change his inclinations or his penchant for blowing up every opportunity that comes his way. But Lashner offers up a sliver of hope. “Phil is as stuck as a person can be, and yet, he seizes on a way to move from one side of the ledger to the other. In that way, I think of the book as very hopeful. I wouldn’t quite call the book a manual of radical freedom, but if someone like Phil can make a leap, the possibility exists for any of us. Freedom can be overrated when it leads, like it does for Phil, to some fourth-rate New Orleans motel where the carpet is wet, and the trucks blare their horns going by, and the whole place smells vaguely like vomit. Hey, if Phil can embrace the freedom, you can too.”

With Lashner’s successful run of his Victor Carl series, readers may hope that Kubiak will be a return character but don’t watch for that any time soon. “I’m not sure watching Phil do his stuff for righteous causes would be quite as fun as watching him do it for all the wrong reasons, as in this book. I fear a reformed henchman is as much fun as a reformed drunk. I’m glad you found the light, buddy, but really, all I want is a beer.”

Will Lashner gives us more dark characters in his next book or something on the lighter side? “I can’t go too sweet, I might go into sugar shock, but my new hero, while uniquely bitter and just out on parole, at least has a heart.” 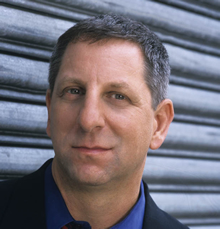 William Lashner is the New York Times bestselling author of THE FOUR NIGHT RUN, GUARANTEED HEROES and THE BARKEEP, as well as the Victor Carl legal thrillers, which have been translated into more than a dozen languages and sold across the globe. THE BARKEEP, nominated for an Edgar Award, was an Amazon and Digital Book World #1 bestseller. Before retiring from law to write full-time, Lashner was a prosecutor with the Department of Justice in Washington, DC. He is a graduate of the Iowa Writers’ Workshop.