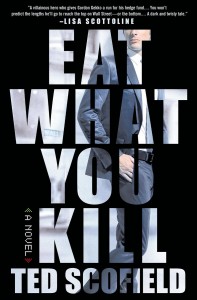 When THE BIG THRILL asked me to interview Ted Scofield regarding his debut novel, EAT WHAT YOU KILL, an unvarnished depiction of one man’s brutal climb to reclaim a spot in the upper echelons of Wall Street’s commanding heights, I was excited to have an excuse to pick up a book that touched upon high finance, the law, and the dark side of human nature.  To my surprise, I discovered that Ted and I go way back—we just didn’t know it.

A graduate of both Vanderbilt Law and graduate Business School, it turns out Ted was working on his juris doctor at the same time I was, and we undoubtedly passed each other in the halls and around campus almost daily.  Needless to say, I was eager to hear about how a former classmate of mine came to write a novel some are calling the AMERICAN PSYCHO of the new millennium.  Fortunately, Ted was happy to take time out of his busy schedule as corporate general counsel and securities attorney and answer some questions for us.

Congratulations on your first novel!  Tell readers of THE BIG THRILL a little about what inspired you to write EAT WHAT YOU KILL and how your background as a lawyer and MBA influenced the book.

Thank you!  Sometime around my eighteenth birthday, I shorted a stock for the first time (that is, I bet that the price would fall).  I had about two thousand dollars riding on it, all the money in the world to me, and I wondered what I could do to force the stock to tank.  At that moment, the seed for EAT WHAT YOU KILL was planted.  Over the ensuing two decades I worked in politics, graduated from law school and business school, toiled as a Wall Street attorney, and the story grew and grew.  Finally, I just had to write it down.  The novel’s major plot points are pretty much what were in my head when I wrote the first word.

I think it’s safe to say the protagonist of your novel, Evan Stoess, is not what most would consider a nice guy.  Did you set out to write an anti-hero from the beginning?  And did you worry that some people would find it hard to relate to someone so ruthless?

Evan Stoess is as real to me as anyone I’ve never met in person, and while writing the book it never occurred to me that he’s an anti-hero or unlikeable.  It may sound silly or contrived, but in my mind he is who he is.  I couldn’t change him anymore than I could change you or me.  Only after EAT WHAT YOU KILL was finished did I realize that Evan is, ahem, a challenging character (which I learned from feedback from early readers).  In retrospect, I now realize that Evan is someone I fear all of us could be, including me, if we suffered his circumstances.  It wasn’t until after I finished the book that my wife pointed out that Evan and I share initials (my real name is Edward).  Cue the Twilight Zone music?

Speaking of signposts up ahead, we have all heard a lot of discussion in the media over the past few years about the “1 percent” in reference to the wealthiest members of society.  In EAT WHAT YOU KILL, the main character is someone who claws his way up from nothing and adapts to a harshly competitive environment by taking lessons he’s learned to their extremes.  What role did the concept of class struggle play in your development of a theme for the book?

Evan is a lot like the young F. Scott Fitzgerald, who had a love/hate relationship with wealth and social class.  Particularly when the rich father of his first love rejected him, Fitzgerald felt alienated, a poor boy always on the outside, looking in.  That’s exactly how Evan feels, from start to finish. Because he attends an exclusive prep school, the kids in his trailer park reject him.  And because his family is not wealthy, his classmates reject him.  He is alone and all he wants is to belong, to be on the inside, and he believes he can buy his way in.

Another hot topic of discussion these days is the sociopathic personality, with the conversation delving into theories that successful people frequently share many traits with sociopaths, and that understanding why such people often find ways to flourish can assist normal people in accomplishing their goals.  Did you channel your inner sociopath to write the character of Evan?  And was he fun to write?

“Evan does what all people want to do but don’t have the guts to actually do.”  Recently two readers have said that to me, which I find wonderfully disturbing.  Author Michael Sears read my novel and said “before you know it, you’re rooting for a monster.”  Many readers have expressed the same idea—some are ashamed to admit they want Evan to succeed.  Others are not.  It’s fascinating to me, the responses to this troubled character.

Not to get too Freudian, but I think fiction allows us to unleash our inner id, to go where our moral minds will not allow us to go in real life.  Evan is a Darwinian animal who rejects the notion of right and wrong because to him, right and wrong are cultural constructs, relative to time, place and people. If there is no after-life, no supreme being, and if death is the end, then why should his behavior be constrained by made-up rules?  Most of us do not agree with this view, but we can experience it through Evan.

Was Evan fun to write?  Some days he was fun. Others, he was terrifying.

I always tell people that being a writer means being a reader.  Can you share with us some of your literary influences?  And what kind of book do you find yourself reaching for these days?

I agree with you 100%.  I’ve read many books and articles by writers about writing, and the one commonality is that great writers are voracious readers.

Many of my literary influences are referenced in EAT WHAT YOU KILL: Camus, Fitzgerald, Hemingway, James Dickey, Joseph Conrad, and Thomas Wolfe.  When I was a teenager I would stand in line for Stephen King’s new releases, and I still read him.

At any given moment I’m reading three things:  a novel, typically a current bestseller, a non-fiction book, generally with a theology angle, and the most recent New Yorker.

What’s next for Ted Scofield?  Can you let readers of THE BIG THRILL know what to expect in the future, what sorts of works-in-progress you have going on?

Last month I sold the film rights to EAT WHAT YOU KILL to Edward R. Pressman, the famed producer of American Psycho, Wall Street, The Crow franchise, and many other major movies, so hopefully we’ll be seeing Evan on the big screen soon.

And I’m working on the novel’s sequel, the continuing story of Evan Stoess.

A hearty thanks to Ted Scofield for giving us some behind-the-pages insight into his debut.  EAT WHAT YOU KILL is already in bookstores and available online everywhere right now.  Be sure to check out the book Andrew Gross called a “bull market rally” that’s “smart, fast [and] savvy” and that Stephen Frey described as written by a “hot new talent.”  Ted’s initial public offering has us here at THE BIG THRILL hoping we see more from him soon!

When he’s not writing psychological thrillers based in the world of finance, Ted Scofield is a securities attorney and General Counsel of Icebreaker Entertainment, a consumer products company founded by his wife, Christi. A native of Louisville, Kentucky and three-time graduate of Vanderbilt University, Ted now lives in Manhattan with Christi, their palm tree, Spike, and their little money tree, Benjamin.

To learn more about Ted, please visit his website.