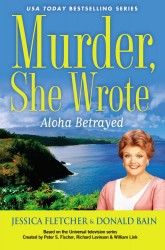 Donald Bain is the author and ghostwriter of more than 120 books. His novels in the Margaret Truman Capital Crimes series include MONUMENT TO MURDER, EXPERIMENT IN MURDER, UNDIPLOMATIC MURDER, and INTERNSHIP IN MURDER.

Now Bain brings back Jessica Fletcher for her most dangerous adventure yet in ALOHA BETRAYED, the latest entry in the wildly popular Murder, She Wrote series.

Jessica Fletcher visits Maui to participate in a law enforcement seminar. While there she learns of a controversial construction project that pits preservationists against progress, a plan to place the world’s largest solar telescope on the dormant, culturally treasured volcano Haleakla. When a body is found at the foot of a rocky escarpment Jessica becomes involved with the mysterious death. In the process she almost becomes part of the island’s lush scenery when someone, with a stake in the investigation, decides to send Jess to her death down the side of the famed crater.

It’s up to Jessica, and co-lecturer and legendary retired detective Mike Kane, to discover the truth behind the death.

ALOHA BETRAYED is the forty-first Murder, She Wrote novel written by the bestselling author of COFFEE, TEA OR ME? which with its three sequels sold more than five million copies worldwide.

We caught up with Bain in Cabot Cove, Maine, to find out what he has to say about the ALOHA BETRAYED—and what else we can expect from him and Jessica Fletcher.

Tell us about Jessica Fletcher. What kind of person is she?

I suppose the best answer is to indicate what kind of person Angela Lansbury is. Angela brought Jessica Fletcher to life on the TV screen, and infused the character with her own values and sensitivities. Angela is as nice a person as she is a talent, so no surprise that Jessica Fletcher is, too. She’s kind and loving, adores her hometown of Cabot Cove, her neighbors and friends, and refuses to abide injustice. She also possesses a keen analytic mind. When combined with her heightened inquisitiveness, that enables her to see through people, especially the bad guys. Of course she often annoys professional law enforcement officers like Cabot Cove’s sheriff Mort Metzger, but because she is invariably right they cut her some slack. I’m sure that in your distinguished career as a homicide detective, Rick, you’ve met a few folks like her.

How did the Murder, She Wrote series come about? Was it planned from the beginning?

I was working with Margaret Truman on her bestselling Capital Crimes series when McGraw-Hill came to my agent to see whether I’d be interested in writing a murder mystery novel based upon the popular TV show Murder, She Wrote. I was agreeable and in 1989 wrote the first book in the series, GIN & DAGGERS. It was successful, but McGraw-Hill decided to scrap its newly formed fiction division, and the novel remained the only book in the series. But then a Penguin imprint offered to purchase from Universal the rights to publish books based upon the series, and they hired me to write them. That was twenty-five years ago, and if anyone told me back then that I’d still be writing them twenty-five years later I would have scoffed. I’ve now written forty-two novels in the series and am in the midst of writing the forty-third. Remarkably, every one is still in print. By the way, my wife, Renée Paley-Bain, and I have collaborated on the last fifteen or so books.

Why and how did you become a ghostwriter?

To avoid being called a blockhead by Samuel Johnson, who wrote “No man but a blockhead ever wrote except for money.” As you know making a living as a writer isn’t easy. Ghostwriting provided a somewhat stable platform. I took on these assignments as a way to pay my bills, and as I progressed the opportunities became more frequent, and lucrative. But while I worked as a ghostwriter for the payday, all those books meant more to me than that. I’ve always operated under the philosophy that whatever I’m writing at the moment is the most important thing I’ll ever write, and maybe the last, no matter whose name is on the cover. Working with so many different people has also been an ongoing education, taking me into the worlds of my “collaborators” and their fascinating lives. It also, as my wife says, enabled me to flex “my writing muscles.” I’ve learned from every book I’ve ever ghosted, Rick. Each one has made me a better writer.

Many people assume that the TV series, at least some of the episodes, were based upon my books, or that my books are novelizations of some of the episodes. Neither is true. Every book I’ve written in the Murder, She Wrote series is an original murder mystery, not based upon any of the TV episodes. In the world of media tie-ins, books are based upon a TV show, a motion picture, or even a popular video game. I belong to a wonderful organization, the International Association of Media Tie-In Writers (IAMTW), established by Lee Goldberg and Max Allan Collins, whose members toil in the tie-in field. I was flattered and appreciative when IAMTW awarded me its first “Grand Master” award.

ALOHA BETRAYED is your forty-first Murder, She Wrote novel. Do you think your writing has changed over the span of these novels? If so, what differences have you noticed?

No doubt about it, Rick. As I write the series, along with my other books, I become a better writer (if that doesn’t sound too self-serving). The older I get the more information I’ve accumulated as I go through life, and that added input (wisdom?) ends up in everything I write. With each book I write I not only become more confident in the craft of writing, I inhabit my characters more fully, including (and especially) Jessica Fletcher. I suppose it’s those “writing muscles” that Renée cites, plus a deeper understanding and appreciation of the human dilemma.

I assume that you’re talking about the Murder, She Wrote series. If I had to pick one book out of that series, it would probably be THE QUEEN’S JEWELS. I loved the characters created in that novel, particularly an elderly former sea captain who captured my heart and that of the readers. But now that you’ve pinned me against the wall and will be satisfied with only one choice, I’ll go on to say that every book I’ve written in the series has provided enjoyment of varying types. When Jessica travels to places outside of Cabot Cove—France, Scotland, San Francisco, New Orleans, London, etc.—I love the research trips to those places and writing about what I’ve learned. The ending of TRICK OR TREACHERY tickled me. I’m a former jazz musician, so setting a book in New Orleans, MURDER IN A MINOR KEY, was satisfying. I could go on—but I won’t for your sake.

Read. Write. I’ve met so many young writers who love to talk about the novel they’re going to write, or are in the midst of writing, but the novel never gets done. Too many writers strive for “perfection” when writing the first draft, which is a guarantee of failure. Get that first draft down; all good writing is rewriting, a phase that I particularly enjoy. At the same time say no to nothing. That was my philosophy when I started out, and while I rejected many projects offered me, and took on some of dubious quality, my “writing muscles” were exercised with every word I wrote. Keep your eyes and ears open. Embrace the world. Read newspapers. And always ask “What if?”

Does Angela Lansbury contribute to the Murder, She Wrote books you write?

No, she doesn’t, The first time we met she said, “I was beginning to wonder whether there really is a Donald Bain.” But Renée and I always have her firmly in mind when writing the novels. The best compliments we can receive is when someone says, “I feel like I’m watching the TV show when I read your books.” Capturing Jessica Fletcher’s voice and spirit is expected of us, and we never stray from trying to achieve that.

So what’s next for Donald Bain?

This year has turned out to be a especially busy one. I have four books being published in 2014, two in the Murder, She Wrote series (ALOHA BETRAYED in April and DEATH OF A BLUE BLOOD in October). My latest novel in the Margaret Truman Capital Crimes series, UNDIPLOMATIC MURDER, will be out in July, and a novel of my own, LIGHTS OUT!, was published in the UK in February and will be available in the U.S. in May. There’s one more to write on the current Murder, She Wrote contract, and a new two-book contract for more in the Truman series is in the works (I recently completed INTERNSHIP IN MURDER for that series). My file of future projects is a foot thick. All I have to do is live to be one-hundred-fifty and everything in it will get written.

Donald Bain is the author and ghostwriter of more than 120 books, including 43 in the “Murder, She Wrote” series. His novels in the Margaret Truman Capital Crimes series include Monument to Murder, Experiment in Murder, Undiplomatic Murder, and Internship in Murder. Other books include westerns, investigative journalism, biographies, and the bestselling Coffee, Tea or Me?, which with its three sequels sold more than 5-million copies worldwide. The recipient of numerous awards, he is represented by Bob Diforio of the D4EO Agency.

Bain can be reached through his website and by email.