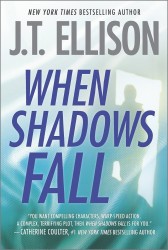 J.T. Ellison’s latest contemporary thriller, WHEN SHADOWS FALL, is the third novel in her series featuring forensic pathologist Dr. Samantha Owens. For J.T., it’s been quite a journey to NEW YORK TIMES bestselling author, from her roots in the rural back roads of Colorado and then Washington D.C., where she attended George Washington University and held a succession of über-cool jobs that included White House staffer in the Office of Science and Technology Policy. Since then, she’s had a stellar career producing eleven novels, including the Taylor Jackson series, which was critically-acclaimed, published in over twenty countries and provided the spin-off for the Samantha Owens books.

In WHEN SHADOWS FALL, Sam Owens finds that life is at last returning to normal after she suffered a terrible personal loss. Settling into her new job at Georgetown University, the illusion is shattered when she receives a disturbing letter from a dead man imploring her to solve his murder. There’s only one catch. Timothy Savage’s death was so obviously the suicide of a demented individual that the case has been closed. Sam’s own postmortem discovers clear signs that Savage was indeed murdered. And she finds DNA from a kidnapped child whose remains were recovered years earlier. The investigation takes Sam into the shadows of a twenty-year-old mystery that must be solved to determine what really happened to Timothy Savage. Nothing about the case makes sense but it is clear someone is unwilling to let anyone, especially Samantha Owens, discover the truth.

J.T. graciously offered to answer a few questions about her new book and her life as a writer.

You seem like an author who is not afraid to throw your characters into dark disturbing places, and that includes Sam Owens. Can we expect the same level of suspense, terror, and twists in WHEN SHADOWS FALL?

Even more so, actually. Not only is Sam reluctantly drawn into Timothy Savage’s case, she is faced with an interesting dilemma. She wants to walk away from her career helping law enforcement discover the truth about crimes, but no one wants to see her go. SSA John Baldwin plays a big role in this book, giving Sam a major opportunity to be a part of the FBI, and this case if the perfect jumping off point. This book has a killer at its heart who is so real and so frightening for it, I think it’s one of the tenser stories I’ve told.

I hate to ask you to play favorites, but I’m wondering if you get more satisfaction writing about a dynamic heroine like Taylor Jackson or the more down-to-earth Samantha Owens.

I love them both. They are parts of me. Sam always was the one in Taylor’s ear saying look before you leap. Now Taylor has to be in Sam’s ear, saying leap already, damn it. They’re so different, but both incredibly strong, feisty, intelligent women. I adore writing Sam, and even more so after WHEN SHADOWS FALL, where there are some real resolutions to her backstory, and she can move forward with her life. It’s exciting to see the vast wilderness ahead, ready to be shaped. But I miss Taylor, and I have big plans for her.

One thing that strikes me about your writing is the level of empathy. Whether your character is facing a killer, falling in love, or finding out a family member has been murdered, you capture the mood in vivid detail. Do you draw from emotional life experiences or is it pure imagination?

The Sam books are very personal to me on a number of levels, almost more so than Taylor. Taylor is the embodiment of my own hero complex. Sam is much more fragile, and vulnerable, and more relatable, I think. I certainly draw on my past experiences for all my work, but Sam was therapy for me during and after a very drawn out infertility battle. The loss of her family, her children, without a doubt echoed my own losses, though I didn’t realize it at the time.

As far as being on the other side, creating the family who’s lost their child, their husband or wife, that’s a combination of imagination and the very sad case of a friend I went to college with who went missing in 1992, Dail Dinwiddie. I remember the horror, the sadness, the fear and uncertainty when we found out she was missing; it translated, because that was my only experience with crime. Dail has never been found, so a lot of what I do is a subconscious way to deal with those emotions.

International bestselling author Catherine Coulter recently asked you to collaborate on THE FINAL CUT, the first in a new FBI series. What was it like getting that call?

Absolutely shocking, and one of those capital M moments you treasure forever. I’d just signed a new three-book deal with Mira for more Sam books on Friday, and Monday morning, my agent called and said, you’re about to get a call. Moments later Catherine called, and we hit it off immediately. I knew working with her was going to be the greatest, most rewarding challenge of my writing career so far, and I was right. She’s great fun, too. She had a brilliant mind, one hell of a sense of humor, and is a great, instinctive writer. I’m seeing the effects of our partnership on my own writing. It’s tighter, faster, more intense than before.

I imagine a writing partnership isn’t for everybody. What type of person do you have to be to make it work?

As long as both writers are the same type, it can work. A Type A and a Type B would kill each other. A similar work ethic is a must, and flexibility and communication are key. This kind of collaborative writing certainly isn’t for everyone, but Catherine and I absolutely combust when we’re together. We’ve discovered two brains are definitely better than one. Mutual respect is the secret ingredient, and the foreknowledge that there will be growing pains, and you need to have a sense of humor to work through them, or you’ll end up bashing each other over the head.

You’ve witnessed a few autopsies as research for you novels. Can you take us back to your first time and describe what that was like? How vital is that kind of first-hand experience?

I’m a big believer in on-hands research, because unless you can use all five senses, you’re going to fall flat, or get something wrong. I didn’t want to do an autopsy, for a variety of reasons, but I knew eventually I had to suck it up and do it. I remember a massive spike of panic when I got there—I told them listen, I may pass out or throw up, or both. They assured me I wouldn’t, and I had to tell them again, so we developed a plan to get me out if I needed to. I was walking in with my notebook and my death investigator friend who set this up said, hey, you may want to leave the notebook outside. At my confused stare, she shrugged and said, you’re gonna get blood on it.

Um, what? There’s blood? I had no idea—I don’t know what I thought happened to the blood at death, but guess what, unless there’s been complete exsanguination, it doesn’t go anywhere. So I learned something before the cutting ever began.

I started the morning fifteen feet away from the bodies. By the end of the morning, I had my head in a chest cavity. They were right; I could handle it. It’s lent a verisimilitude to my writing, but I will never do it again.

I found that it was much easier getting interviews with scientists, forensic, and technical experts once I had a published book under my belt. They were calling me back right away, as opposed to avoiding me. What advice can you give new authors when reaching out to specialists in the field?

My experience has always been they want you to get it right. I started with cops, and they were so open and welcoming, almost too welcoming. My first night I sat with several of the cold case murder books, looking at autopsy photos and crime scene photos and rape kits and ballistics reports and suicide shots thinking, jeez, girl, careful what you wish for. My advice would be to focus on being professional and clear in your goals—I had one instance where I called a state park to ask about their security measures, and the woman very much misunderstood me when I said I’m a local thriller writer, and I’m dropping a body in your lake.

Like me, you’re a cat person, and most writers I know have beloved pets. Is it my imagination, or do authors tend to be more animal-crazy than other people?

This is going to sound totally wacked out, but it’s something I came across when I was doing research for THE IMMORTALS. Animals are drawn to energy, and if you think about how much energy we give off when we’re creating, we attract the beasts like furry magnets. Same with yoga or meditation—if you’ve ever noticed your cat hanging around while you’re intent on something, it’s because of all the energy you’re putting off. They like to be near us, and we think it’s because they love us. Plus, so many of us are isolated, home alone in our garrets, slaving away, we need something to bounce ideas off of. My last cat was a total sounding board. I have two new kittens now, and they are so happy when I read aloud to them, though they look at me funny when I do the British accents. It’s just the expected relationship between a writer and his or her familiar, I think.

What is the best writing advice you ever heard?

“There are no rules except those you create, page by page.” Stuart Woods told me that. It’s been on my office door ever since. I actually sent him a note this week, ten years later, to tell him it worked then, and it still works today.

J.T., thank you so much for giving us your insight.

Thank you for having me!

“You want compelling characters, warp-speed action, a complex, terrifying plot, then Ellison’s When Shadows Fall, with Dr. Samantha Owens, is for you. Be prepared for calloused fingers you’ll be turning the pages so fast.” 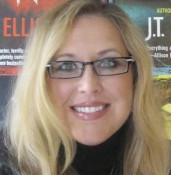 J.T. Ellison is the NEW YORK TIMES bestselling author of eleven critically acclaimed novels, multiple short stories and has been published in over twenty countries. Her novel THE COLD ROOM won the ITW Thriller Award for Best Paperback Original of 2010 and WHERE ALL THE DEAD LIE was a RITA® Nominee for Best Romantic Suspense of 2012. She lives in Nashville with her husband and is hard at work on her next novel.