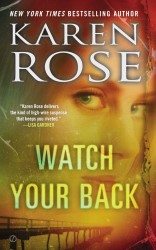 We all have those news stories that haunt us.Often they’re accounts of sudden tragedies. The headlines force contemplation of what the overwhelming loss must be like for the survivors.

For Karen Rose, one of those stories is about a woman who lost her family in a few random seconds at a convenience store.

“She wasn’t with them at the time, but although she lived, she was understandably destroyed by this loss,” Karen says.“She was pregnant and lived on for the sake of her unborn child.”

Writers, of course, grapple with the emotion and empathy of such incidents on the page. Karen did that in writing her new book,WATCH YOUR BACK (Signet) starring Baltimore Homicide Detective Stevie Mazzetti.

“I never forgot that story and when it was time to write Stevie’s character, that story was my inspiration,”Karen says.

Stevie has appeared in the pages of three previous Baltimore-set thrillers from Karen, who grew up in Maryland. Earlier titles include: YOU BELONG TO ME, NO ONE LEFT TO TELL, and DID YOU MISS ME? All involve police and prosecutors at work, so Stevie’s been in the squad rooms and on the mean streets of those stories in a supporting role.

“I’d planned the four-book Baltimore series back in 2009, always knowing that Stevie’s book would be the final book,” Karen says. “Instead of a freak accident, Stevie’s husband and child were killed in a wrong place, wrong time accident—during a robbery of a convenience store. I always knew that the final book would be Stevie realizing that it wasn’t ‘wrong place, wrong time,’ but a deliberate act, that her husband had been murdered.”

That’s not a spoiler. That’s the setup, and it comes in the first few pages of WATCH YOUR BACK, since it’s just part of what Stevie has to contend with as the story unfolds.

It’s a tale that promises to keep readers turning pages. In addition to finding the truth about her husband’s death, Stevie has to deal with a partner who might have miscarried justice. That’s the kind of truth no law enforcement officer wants to face.

That’s still not all Stevie has to worry about, though. As she struggles to right previous wrongs, she becomes the target of a psychopath.

At least Clay Maynard is in her life and capable of meeting a few challenges of his own. He’s an ex-Marine, but even a Marine’s training might not be enough against a killer driven to keep the truth from being uncovered.

Since Karen was familiar with the characters from the previous books, putting them at center stage came easily.

“I just dropped them into the story and let them go,” she says. “They responded to each situation consistent to their personality. My biggest challenge was typing fast enough to keep up with them.”

Most of that typing’s done in a cozy office in Karen’s Florida home these days. It’s a room with burgundy wine walls. “Or I guess they could be called blood-colored…” Karen says.

While she can write just about anywhere including mountaintops and cruise ships, her office is where she’s most comfortable crafting thrillers like WATCH YOUR BACK that hit the NEW YORK TIMES bestseller list and earn praise from contemporaries such as Lisa Gardner, who once noted: “Karen Rose delivers the kind of high-wire suspense that keeps you riveted.”

“Dark spaces always help me focus,” Karen notes. Inside those blood red walls a collection of ugly statues, gargoyles, and tribal masks look down on her as she works.

No doubt those surroundings have some impact as she’s crafting antagonists like the figure threatening Stevie. The reverberations of the works of Edgar Allan Poe that chilled her as a child may contribute a bit as well, and she loves vampire novels and other thrillers with a supernatural twist. In fact, a new book by a favorite author’s her reward for completing a manuscript these days. It used to be a handbag, but she’s written 15 books and the closet’s a little stuffed.

It’s not just other thrillers, but real world evil that often swirls in her thoughts as she crafts a tale, however.“I’m most terrified by the evil that wears a pleasant face, the person that instinctively knows who is vulnerable and exploits them—all while seeming completely normal to the casual observer,” she says.

The haunting and terrifying case of Cleveland’s Ariel Castro comes to mind. Castro imprisoned kidnapped victims for years without discovery. “It could have been any street. It could be happening in the house next door to you right now, without anyone suspecting a thing,” Karen says.

Those dark realities do get tempered a bit as Karen writes and sometimes binge writes, though these days she tries to keep to a schedule that avoids as many late night hours and sleep deprivation.

Manilow’s on a loop. Country music is just too singable for writing.

Barry on the other hand “is mellow, and I’ve heard the words so many times that they’ve simply become pleasant background.”

OK, Karen admits she had to take “Copacabana” off the playlist.

“It kept jerking me out of the story to sing along,” she says. “`Her name was Lola, she was a showgirl…’”

We were talking about villains, though weren’t we? Karen’s a former engineer. While art and a technically precise job like that of pouring over chemical processes may seem quite different, characters and plots benefit from an engineer’s logic.

“I’m most interested in the thought process that goes on in a villain’s mind,” Karen says. “It’s said that the villain is the hero of his own story, and I think that’s true. He might even believe he’s doing the `right thing’ from a moral standpoint, but even if he knows his actions are not moral, they are the ‘right thing’ for him.”

Readers must also believe that. “A villain’s motivation and actions have to make sense from his point of view. My goal is to develop a villain that captures a reader’s attention so completely that they think, `If I were evil, I’d do exactly the same thing,’” Karen says.

In the case of WATCH YOUR BACK, the villain came first, prepared to provide the perfect dose of menace for Stevie and Clay since they threaten the character’s entire world. Karen says usually it’s the heroes and heroines who lurk in her imagination waiting to take center stage.

The Baltimore sequence began with YOU BELONG TO ME. A headline touched that book off also.

“A teenaged girl had been assaulted by a group and left to die,” Karen says.“While that would have been heinous enough, a crowd gathered, cheering the assailants on and taking photos. This went on for some time before an onlooker had the courage to call 911. The legal system knew how to punish the assailants, but was uncertain how to punish those who watched and did nothing.”

She found herself empathizing with the victim’s family and thinking that in their shoes, she’d want everyone involved to pay, including those who stood and watched.

“From that, a fictional crime and several fictional villains sprang into my mind—the victim’s brother who wanted revenge on everyone who’d participated in the assault, the original perpetrators who’d gone on to live their own lives, and those who’d kept their silence, covering up their guilt.”

Stevie participated in that story though it had different leads, and in all of Karen’s work, she’s fascinated both by character interactions and how plotlines can intertwine.

“I’ve always thought that the biggest similarity between what I did as an engineer and what I do now as an author is creating a logical flow of events, especially within intertwining storylines,” Karen says.“I always enjoyed studying how chemicals combine and how people interface to create a product and deliver it to the marketplace. Making sure that the right chemical gets mixed at the right time—or that humans communicate the right information at the right time—is critical.”

In her stories, she loves concurrent storylines that appear independent of each other, until events and people intersect. “Figuring out when all the characters cross paths is part of the fun,” she says.

As tales unfold and characters engage and intersect, logic checks from the engineering side of her brain can lead to creative innovation.

“Often I’ll be writing merrily along and a character does something that makes me stop in my tracks and think, ‘That just does not make sense. Why would he/she do that?’” Karen says.

The first time that happened, panic resulted. She grew calm again when she realized those moments could be turned into plot twists and surprises. When something doesn’t quite make sense now, or when she’s in a corner, Karen asks: “What has to happen to make it make sense?”

Of course, it’s secrets and character nuances that help make WATCH YOUR BACK and all of Karen’s books fresh. “The rules for a thriller are basically the same—a villain does something bad and the good guys catch him and make him pay. Who the villain is and who the good guys are make each situation—each plot—different.”

New and returning readers can find out what sets WATCH YOUR BACK apart in just a few days at this writing. The book goes on sale Feb. 4.

Then, with Baltimore wrapped up, it’s on to a new series. That means new characters and a new city. There will be several familiar faces from previous books, however. A visit to Karen’s website allows readers to see how her books intertwine and intersect on a handy interactive map.

“Setting the last series in Baltimore was a lot like going home, because I grew up in the area between Baltimore and Washington, DC.,” she notes. “This next series is set in Cincinnati, where I lived for fifteen years. I started my career there as a newlywed fresh out of college, and later we started our family there as well. It’s a nice place to live—but it just got a little more dangerous now that my villains have been loosed upon it!”

Award-winning, #1 international bestselling author Karen Rose worked for a number of years in the engineering field, earning two patents, but she began writing novels when scenes started to fill her mind and her characters would not be silenced. Since her debut suspense novel, DON’T TELL, was released in July 2003, she has written more than a dozen novels and has been translated into twenty-three languages. Her books have placed on the New York Times, the Sunday Times (UK), and Germany’s der Spiegel bestseller lists. Karen lives in Florida with her family, her cat, and her dogs, Loki and Thor.

To learn more about Karen and her books, please visit her website.