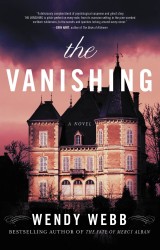 It’s fair to say that a protagonist who beats the odds when everything is against her inspires most thriller writers. Or, maybe a writer has painted an antagonist so vividly in her mind, the story to thwart him aches to be told. Not Wendy K. Webb. Yes, bigger than life protagonists and evil antagonists are critical to her stories. But her muse comes from a different place than most, “Setting is what inspires story for me,” she says. “When I start a new novel, I first think of where I want to set it.”

As a gothic suspense novelist, the place (and its secrets) becomes more than a rich backdrop, it’s a character in the story. In her latest novel, THE VANISHING, Webb describes the setting as moving the house from Downton Abbey to the Minnesota wilderness. But Webb said she didn’t stop there, wondering, “What sort of eccentric nobleman might have built it? And, what strange things might have happened there over the years?”

From that came THE VANISHING, where recently-widowed Julia Bishop’s life is collapsing around her, when a stranger appears on her doorstep with an intriguing job offer—he asks Julia to be a companion for his elderly mother, the famous and rather eccentric horror novelist Amaris Sinclair, whom Julia has always admired… and who the whole world thinks is dead. Too intrigued to decline, Julia accepts the position, hoping she has found her chance to start anew.But when Julia arrives at Havenwood, she begins to suspect her too-good-to-be-true job offer is exactly that. Mysteries and secrets haunt the halls of Havenwood and the forest beyond. Why did Amaris Sinclair choose to vanish from the public eye more than a decade earlier? What are the whispers Julia hears? And why, exactly, was Julia brought to Havenwood in the first place?

For writers, the fun of creating a great protagonist is that they eventually manage to take on a life of their own—a life that even the author hadn’t imagined. Webb’s Julia Bishop is no exception. According to Webb, “What surprised me was her ability to forgive—her husband, specifically. I hadn’t planned on that, but when I was writing some scenes that I won’t give away here, I just found myself putting those words into her mouth.”

In addition to forgiveness, Webb also admires Julia’s determination. Webb explains that a protagonist needs as much as she can get when battling antagonists that aren’t made of flesh and bone. “There’s a real challenge for the characters to defeat the supernatural bad guy because, how do you make a malevolent spirit go away? You can’t just call the police or take out a restraining order.”

To say Wendy Webb is at home in the gothic-suspense genre may be a bit of an understatement. When asked about her research, Webb said, “I will admit to spending a good part of my Saturday mornings watching cable TV shows about hauntings. I love to hear people’s true life experiences with the otherworldly…” Webb added that her research stretches far beyond the remote and Internet. “When I travel, I love to stay in old houses that are now bed-and-breakfast inns. Believe me, innkeepers have stories about their ghostly residents, so I get a lot of ideas that way, too.”

Webb seems to enjoy research as much as writing—a rarity among writers. For the novel she’s working on now, Webb explained that an extra layer of research is required just to get daily life correct, “[It] has a whole story line set in 1905, and I find myself having to research things like — did average houses have electricity in 1905? How about indoor plumbing? What about telephones? Even little things like, what did typical Americans eat for dinner in 1905? Did they go out to restaurants?”

But Webb will be the first to admit she loves all of it. In fact, that’s at the heart of the advice she gives to aspiring writers. When asked, Webb passes along a piece of advice she got from agent early in the process. “[My agent] told me to think long and hard about the genre of my first book, because if the book was successful, publishers would want more of the same.” 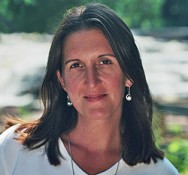 In addition to the just-released THE VANISHING, Wendy Webb is the bestselling author of THE FATE OF MERCY ALBAN (2013 Hyperion) and THE TALE OF HALCYON CRANE (2010 Holt). She writes novels of gothic suspense set in big, old mansions where family secrets lurk.