With PANDORA’S TEMPLE, Jon Land brings back his hero Blaine McCracken. We haven’t heard from McCracken since 1998 in DEAD SIMPLE when we left him in the swamps of Florida with his mentor and friend Buck Torrey.

I am happy to say that PANDORA’S TEMPLE was like getting together with a good friend. You know the kind I mean – you don’t see one another for years and pick up right where you left off. That’s the feeling I had welcoming back Blaine McCracken.

PANDORA’S TEMPLE begins with the aftermath of a deepwater oilrig disaster that claims the life of a friend and one-time member of McCracken’s commando unit.  An investigation of what remains leads to the conclusion that one of the most dangerous and elusive elements in the universe, dark matter, is to blame.

McCracken, with Johnny Wareagle, Sal Belamo, and Captain Seven, race to prevent an energy magnate and a leader of a doomsday cult from finding the dark matter for entirely different but no less dangerous reasons. To accomplish this, they need to follow an ancient legend some four thousand years in the past to find PANDORA’S TEMPLE was “built to safeguard the most powerful weapon man would ever know.”

Oh yes, McCracken is back!

In many ways, this is a typical Blaine McCracken novel, yet the intervening years between DEAD SIMPLE and PANDORA’S TEMPLE have wrought changes.

The most obvious is that the characters have aged. Jon felt he needed to be true to the reader and character meaning Blaine needed to age in real time, so we find him celebrating his 60th birthday as PANDORA’S TEMPLE opens.

Land also sees McCracken as “an apt metaphor for how many in that age range find themselves out of work and struggling to find new jobs. So much of what we are is what we do and McCracken, like so many others who are still young and able by today’s standards, is faced with losing that.”

In writing PANDORA’S TEMPLE, Jon shared that although he may have stopped writing about Blaine and Johnny, he “never stopped living with them” in his head. It’s a good thing too since one of the unexpected difficulties in bringing McCracken back was the challenge of creating a “very dense” book, “heavy with highly choreographed action set pieces. Making them fast-paced, making them credible, avoiding redundancy, and being original is an exceptional challenge,” Jon said, “especially since I didn’t want to write another McCracken book, I wanted to write a McCracken book that could stand with the best entries in the series. And I believe PANDORA does just that.”

Besides the jammed-packed action, part of what makes the McCracken books is the friendship between Blaine and Johnny. Theirs is a friendship that was forged in the fires of combat and Land has an uncanny ability to capture the depth of that friendship with few words and understated actions. There is no misstep here.

Jon believes this understanding of friendship goes back to his study of literature at Brown University. “It was Leslie Fiedler, writing in his brilliant work of criticism Love and Death in the American Novel, who said that the greatest relationships in American fiction have always been between men.”

This deepening friendship reflects the personal growth Blaine McCracken has undergone in our absence. We find a man who has accepted his place in the world and who is comfortable with what that means to him and his personal life. As Jon so aptly puts it, “Watching himself passed over for younger versions of himself, for the first time Blaine finds himself racked by self-doubt. And heroes like McCracken aren’t prone to retiring easily—it’s just not in his vocabulary. He is indeed still his wisecracking self but the years have left him more introspective and maybe a bit jaded.

“Older, more jaded, and thus more likely to accept his lot in life, [Blaine] pretty well know that whatever other life options he may have had twenty years ago are gone. He accepts his loner status because it’s the only way he know how to live and, in his heart, believes it’s the only way he can be happy.”

The beauty of Jon Land’s writing in PANDORA’S TEMPLE is that this personal growth and acceptance is subtly imparted to the reader with a minimum of words while carefully balanced against the needs of a true thriller.

Jon modestly shrugs his role in this away, saying, “You give me too much credit! It should go to my characters… all I do is type what they say.” He goes on, “If I had all the answers before I started, if I imposed my own understanding of my characters, we’d lose the natural evolution and growth of their characters. That’s what makes both Blaine and Caitlin so much fun to write… and read!”

Will it be another thirteen years before Blaine and Johnny come back? Jon says he fully expects to see Blaine again well before that. “But I need to find another concept worthy of him and it definitely takes a different, and more challenging, mindset to craft the multitude of high-action scenes and set pieces that form the backbone of his adventures.”

PANDORA’S TEMPLE works as a great introduction to McCracken and his world while at the same time effortlessly continuing the saga of Blaine and his friends. 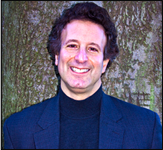 To learn more about Jon, please visit his website, and if you want to read more Blaine McCracken adventures, the entire series is available through Open Road Integrated Media.