In DIABLO III – THE ORDER, Deckard Cain is the last of the Horadrim, the sole surviving member of a mysterious and legendary order.  Assembled by the archangel Tyrael, the Horadrim were charged with the sacred duty of vanquishing the three Prime Evils: Diablo (the Lord of Terror), Mephisto (the Lord of Hatred), and Baal (the Lord of Destruction). As the decades passed, the Horadrim’s strength diminished. Now all of their collected history, tactics, and wisdom lie within the aged hands of one man, a man who is growing concerned.

Dark whisperings fill the air, tales of ancient evil stirring.  Amid the mounting dread, Deckard Cain uncovers startling new information that could bring about the salvation—or ruin—of the mortal world: other remnants of the Horadrim still exist. He must know why they are hiding from their own.

As Cain searches for the lost members, he is thrust into an alliance with an unlikely ally: Leah, an eight-year-old girl feared by many to carry a diabolical curse. What is her secret? How is it tied to the prophesied End of Days? If there are other living Horadrim, will they be able to stand against oblivion?

I had the chance to catch up with Nate a few days ago and ask him a few questions.

Is there anything special you’d like to tell us about DIABLO III – THE ORDER?

THE ORDER is based in the world of the mega-bestselling video game franchise DIABLO, from Blizzard Entertainment, and coincides with the release of DIABLO III, the first DIABLO game in over ten years. It’s an attempt to “reboot” the franchise by providing the back story from the first two games and giving a lead-in to the third. It’s a darker, grittier read than past books, an epic quest novel–and it is the first to explore the life of the iconic DIABLO character Deckard Cain.

THE ORDER takes place a few years after the events of DIABLO II. Although most of those who fought the great battle on Mt. Arreat believe the danger has passed, Deckard Cain has continued to wander Sanctuary, obsessed with a growing number of signs that indicate a new invasion from the Burning Hells is coming–one that will dwarf all that have come before. Cain believes that the destruction of the Worldstone has upset the natural order of Sanctuary, and he is determined to follow the signs that might help him stop the demon uprising–and to find out, once and for all, whether there are any Horadrim left. He is also haunted by events of his past, things hidden so deep even he barely remembers them. But soon, they will return to the surface in ways he cannot predict.

Cain travels to Caldeum and finds Adria’s daughter Leah, who has been living in hiding with Gillian the barmaid. Leah has her own terrible secrets to battle. After a terrible tragedy befalls them in the city, Leah and Cain go on the road to seek out what might be a secret order of the Horadrim, rumored to be living somewhere beyond Kurast. On the way there they encounter an Ivgorod monk who has a quest of his own. Meanwhile, a new leader has arisen in league with the Burning Hells, a man with his own twisted past known only as The Dark One. Soon, Cain and Leah’s path will intersect with his, and the consequences will be catastrophic–and may mean the end of Sanctuary as we know it.

Why did you choose Deckard Cain as the main character?

Cain was the perfect protagonist for this book, because he’s been through the horror of the demon invasions of Sanctuary, and he’s a storyteller and a scholar–he knows what’s happened and what is to come. I retell some of the more important events from earlier games through memory and flashback. So the novel is very accessible for those who don’t know as much about the games, and a nostalgia trip for those die-hard fans who want a different angle on existing lore.

THE ORDER shows Diablo fans what Deckard Cain has been doing leading up to Diablo III, and how he and Leah end up together–and why. It lays some very important groundwork for the events of D3. I worked very closely with Blizzard on the book. We wanted to set the stage, foreshadow those events in a number of ways, while telling our own, epic quest novel that finally gives Deckard Cain his own story, rather than using him as a supporting character. I think readers and fans will recognize clues to future events, as well as new lore that explains what happened in the past in ways that might be surprising.

We also wanted to introduce new players–and new readers who don’t know anything about the games–to the DIABLO universe, while making sure we kept the novel itself compelling. I did that with brief, very action-packed flashbacks to parts of the earlier lore that are essential to the plot of THE ORDER, and that explain the decisions Cain has made in his life. I also put a new twist on those events that people probably won’t see coming–and they explain a lot. I think readers will have a great time with it whether they have any familiarity with the games or not.

As explained above, the novel was inspired by the DIABLO game franchise. Writing novels that tie into existing franchises offers an entirely different set of challenges. My working relationship with Blizzard is great. They are really good at coming up with an exciting idea they want to explore, and then allowing me to expand upon that and put my own stamp on it, while still guiding me in the direction they’d like to go. They’re very open to my ideas, and a lot of them–particularly Cain’s back story–became a part of THE ORDER. It’s a thrill for me to be a part of creating such important pieces of iconic characters like Cain. The most important thing for Blizzard is making sure that any details I include fit with DIABLO lore, and that the novel leads the story in the direction they want to take the franchise.

I put in a lot of time getting familiar with the DIABLO universe. I wanted to get this right, so I read every piece written on Diablo.  I sat down with the Blizzard lore team and went through the entire history of Sanctuary. I played the old games and even got to play an early D3 beta, before anyone else even saw it. Once I felt comfortable with the history, then I could work on putting my own spin on it, and take THE ORDER in the right direction.

I’m doing a lot of online promotions–a virtual tour with interviews with a number of game-focused sites, podcasts, that sort of thing. Posting on message boards and interacting with fans is important. In this case, the DIABLO fandom is legion–literally millions around the world. So it’s really a matter of making sure they’re excited about the novel, as well as the new game, and want to read it.

I am finishing an original thriller for Thomas Dunne Books called DAY ONE, which involves the day that machines become sentient, and take over New York City.  I’ll most likely be writing another DIABLO novel in the near future.

I have a busy personal life, with three children and another on the way. I also work at a local law school, which keeps me busy. And of course I love to read everything I can get my hands on.

A couple of Favorite Jacket Reviews:

“A masterful third novel…keeps you on the edge of your seat.” –BOOKLIST on THE BONE FACTORY

“With each new novel, Kenyon further establishes himself as one of horror’s most original storytellers.” –BOOKLIST on SPARROW ROCK 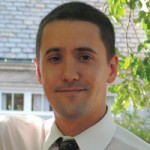 Nate Kenyon is the author of four novels and two Blizzard video game tie-in novels, STARCRAFT GHOST: SPECTRES, and DIABLO III: THE ORDER. Two of his novels, THE REACH and SPARROW ROCK, have been optioned for film. He has a sci fi novella, PRIME, from Apex Books, and four of his stories appeared in the Dark Arts anthology WHEN THE NIGHT COMES DOWN. He has had short stories published in a number of magazines and anthologies, and is currently working on a new thriller for Thomas Dunne Books, DAY ONE.

To learn more about Nate please visit his website.